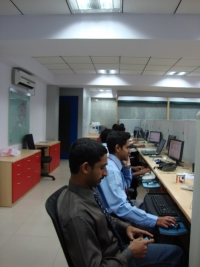 In my continuing quest to understand work habits and productivity from an existential perspective, an article from The New York Times really caught my eye—it detailed a study on what impact distractions have on our cognitive abilities.

First, let me define distraction—21st century life. Phone calls, text messages, email, Twitter, Facebook, doorbells ringing, the call of nature, the sudden need to reorganize your sock drawer while writing your book when your editor is waiting, and countless more that I’m sure others can name.

The article explains that—no surprise—the concept of multitasking is really a misnomer. “In most situations, the person juggling e-mail, text messaging, Facebook and a meeting is really doing something called ‘rapid toggling between tasks,’ and is engaged in constant context switching” said Bob Sullivan and Hugh Thompson, the article’s co-authors.

As economics students know, switching involves costs. But how much? When a consumer switches banks, or a company switches suppliers, it’s relatively easy to count the added expense of the hassle of change. When your brain is switching tasks, the cost is harder to quantify.

The authors cite some previous work on the subject, including that by Gloria Mark, a professor at the University of California, Irvine who found that office workers are interrupted or self-interrupt every three minutes, but it takes 23 minutes for them to get back on task. But Sullivan and Thompson said that the research examining the quality of the work given these interruptions has been almost nonexistent.

As a result, the authors themselves asked Alessandro Acquisti, a professor of information technology, and Eyal Peer, a psychologist, at Carnegie Mellon University in Pittsburgh to design an experiment to measure the brain power when someone is interrupted. What they did was have 136 participants read a short passage and answer questions about it. One group simply completed the test while the other two groups received instructions that they might be contacted with further instructions at some point by text message. During the first round, the two groups were interrupted twice while during the second round only the second group received an interrupting message. The third group simply waited for the interruption that never came.

Sullivan and Thompson said that they expected the groups who were interrupted to make some mistakes but they said the results were “truly dismal.” The interrupted groups performed 20 percent worse than the control group. They likened this to turning “B” students—80 percent—into failing students—60 percent.

The researchers conclude that while there is evidence that the brain does adapt to interruptions and expectation of interruption, focusing on a single task is still optimal as opposed to multitasking.

And as I write this, while simultaneously having my breakfast, waiting for a repairman, an order of groceries, with the television droning in the background, I am reminded of Louis Hoffman’s post on these pages where he spoke about how smartphones have taken away so much of our precious time to reflect because we feel compelled to fill our time while waiting on line, for example, by using our smartphones to check emails or tweet or update our Facebook status or send a text message or play a game.

People don’t brag about their ability to focus—they brag about their ability to multitask. It again comes down to that dichotomy between being and doing. Meditators know that learning to be is associated with better focus, because meditation helps us to allow thoughts to simply pass without getting caught up in them, while we stayed centered on our breath, for instance. But we live in a society that prizes doing above being, no matter what the cost, it seems. The International Business Times noted a 2012 study ranked the United States 17th in the world in education. And if we keep getting interrupted, how much farther will we drop? And what tragedies have to happen before we start talking about change?