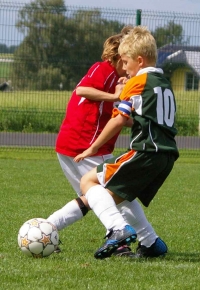 Competition is the source of growth and progress. I believe that deep down many of us know this to be true. However, in recent decades, this perspective has seemingly fallen out of cultural favor and now appears to represent a quite unpopular view. In fact, the term “competition” itself has assumed certain negative connotations, actually becoming something ugly, repulsive, and distasteful.

It isn’t difficult to understand how this situation has developed. If there are winners there must also be losers and, unfortunately, those who win are often not very gracious or respectful toward those who lose…to say it mildly. Tragically, winning in American society and culture has often been accompanied by arrogance, ego inflation, and aggressive domination, while losing has thus been associated with humiliation, failure, and inadequacy. Winning and losing carry with them implicit value judgments—winning is good and losing is bad, winners are strong and losers are weak, winners are better than losers, etc.

The hyper-aggressive “win at all cost” mentality has left many victims in its wake and is certainly a cause of great concern. I would, of course, hope that none of us want to perpetuate that type of “winning,” which I am in no way advocating. “Losing” within this framework can be very damaging to an individual’s self-image and sense of personal value/worth, particularly for children and youth, and we rightly oppose and seek to counter this unhealthy impact.

However, this represents an extremely narrow and limited understanding of the phenomenon of competition that has contributed to what I would call an “equal participant” approach, which is particularly evident in kids’ sporting activities. This can assume myriad forms, often involving a central emphasis on the absence of scoring—goals, runs, outs are not counted, and numbers/points are not tracked or kept. The prevailing attitude is that all players are the same, no one is better than anyone else, we’re all just participating together. I do think that this framework can be very appropriate and healthy in particular settings, perhaps especially with younger children, but it is inherently flawed and becomes problematic as children progress developmentally and face significant life challenges and decisions.

The basic and unavoidable fact is that as human beings we aren’t all the same—we are uniquely different with varying degrees and levels of aptitude, capability, and potentiality. While we are certainly equal in regard to our nature and worth as human beings and ought to have equal access to resources and opportunities, we are not equal in these areas. Indeed, how could we be? Actualizing our innate potentialities is at the core of the process of self-development and identity formation, which is essentially what differentiates us as separate, individual persons. This process absolutely depends on an environmental context that can facilitate it, which provides possibilities and situations for developing an individual’s personal identity and realizing the full range of his or her unique potentialities.

But this is precisely what an equal participant context cannot do, for it levels the playing field, so to speak, reducing the overall performance level to an average standard, to the lowest common denominator. What is particularly troubling here is the ultimate meaning of the common expression “just do your best.” With no clear basis for comparison or distinct performance level to measure against, one cannot know what one’s best is, or how it can be achieved. The very idea of “doing and being your best” becomes meaningless.

After all, that really is the entire point, isn’t it? We yearn to do and be the very best that we can be. Real, healthy living is about striving for personal excellence in all that we do, to do the best that we can in every situation, whatever we undertake, whatever life demands of us—striving continually to fully realize and develop our potentialities, talents, and abilities, and such living can only be sustained on the basis of some form of competitive striving and challenge.

This, to me, reveals the great, hidden secret of competition: ultimately, we are never competing against others but only and always against ourselves. The true purpose of a competitive environment isn’t to create a degrading hierarchical structure in which your worth is based on if you are a “winner” or “loser,” on whether you are better than someone else. Rather, it is to create challenging opportunities to improve performance and continue getting better to be the best you can be given a particular task or activity. We use the forum of competition and the performance standards of others to raise our own levels of performance. We don’t compete to be “the” best, we compete to be our own personal best; we don’t compete to be better than others, we compete to prove that we are better than our prior achievements. Challenges show us what we’re made of, they bring out what is in us, revealing who we are and what we’re capable of—our capacities and potentialities are developed and realized only when they are tested.

The ancient Greeks knew well what we have largely forgotten, and their defining idea of the agon puts us to shame. Life and growth are an agonizing struggle, a challenging tension, a competitive striving, pushing us farther, beyond what we thought we were, toward what we can be…our best.

I try to be mindful of this for myself of course, but I am particularly aware of this in my role as a father. While I want to protect my boys from the negative impact of unhealthy competition, as we have discussed, I cannot protect them from the possibilities of perceived “failure,” inadequacy, and rejection, that competition provides without depriving them of opportunities to succeed, grow, and develop into their best selves. My oldest son, who is eight years old, just tried out for a competitive soccer league after several years of playing in a recreational league. He is very athletic, loves sports, and thrives in environments in which he is challenged to improve his skill and performance level. This has been the first time he has had to actually try out for a team, with the resulting possibility that he may not make it. While his mother and I were very confident regarding his ability, we were also anxious at the possibility of him not being chosen for the team. We have some concern about the potential negative impact of a competitive environment, but we see his passion for the game, his confident belief in himself, and his desire to improve his performance level, and we knew we had to risk it…because he is worth it…his worth is worth it.

He made the team and we are so excited for and proud of him. However, his friend who tried out with him didn’t make it, providing him with an initial experience of the reality of the risks of competition. It has heightened my gratitude for the function and role of competitive challenges in life, which offer our only hope for becoming our best selves. Ultimately, we only truly lose when we fail to give everything that we have and are, our very best, and when we do so, we are always and can only be winners. The failure or loss isn’t in not making the team, but in not trying and being tormented by what could have been.