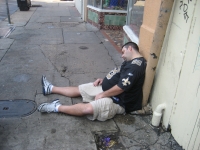 It was 2010. After graduation, I took my family to San Diego. We collectively needed the rest, the break, even though we couldn’t really afford it. We had a great time, did lots of child-oriented activities, but also had some more grown-up sorts of experiences.

One of these was a moment at the wildlife sanctuary. There we saw the last of a particular species of rhino. The tour guide informed us this species was extinct. As we were looking at a live animal, this came as somewhat of a shock: how can it be extinct when we are looking right at it?

But this was the last animal. Even were she young enough to breed (she wasn’t), there were no other specimens to breed with. Even if there were 20 or 30 more animals, the gene pool would still be too small for the species continue. It was functionally extinct.

This animal has since passed on. This rhino species is both functionally and factually extinct. Nothing on Earth could have saved it in 2010.

And we are this rhinoceros.

Denial of death is no longer the problem.

Each of us will die, and we spend a lot of time and energy trying not to be too aware of it. Of course, all sorts of psychological and sociological problems ensue therefrom. And the problem has grown much bigger now than the simple denial of death. Now we face extinction, and the denial of that. And there is nothing we can do about it. Maybe you don’t believe it. Maybe you think if this were true, we would see it on the news. Maybe you aren’t watching the right news. A handful of corporations control virtually all news media. It was depressingly easy to gather the facts for this piece. Just turn off the news.

Here are the facts.

First, the planet’s oceans are toast. Ocean salinity is on the rise. This means they are getting saltier and saltier. Oceanic organisms are adapted to specific salinity levels, and this is a major problem. And only one of several.

Next, ocean temperatures are higher than they have been in 150 years causing animal species to cross-migrate. Warm water fish are moving to warmer spots and cool-water fish to cooler ones. This is potentially a major eco-system upheaval. Moreover, combined with the other factors and the rate of increase, this will inevitably prove fatal for many, many species.

Carbonic acid, a direct result of human-created pollution, is causing surface acidity in the oceans, a threat so far mostly to shelled organisms and reef systems. Of course, nothing can swim in pure carbonic acid. There are small amounts of it in our blood, but this does not make it a healthy subject. Reefs are major ecosystem centers. When they go, hundreds of dependent species go with them. Reefs also create important bays and breakwaters.

Oceanic oxygen levels are declining as CO2 soaks up available oxygen. Beautiful algae and jellyfish blooms are a warning sign this is going too far: these organisms thrive in the low-oxygen environments the fish cannot survive. Whenever you see a photoshop-color-enhanced picture of bright blue jellyfish lighting up the dawn coastline, go ahead and wonder at how beautiful this image is—and know that it is a result and a cause of a global oceanic catastrophe in progress.

In the oceans, a mass extinction event is either scheduled or in progress, depending on who one asks.

Here above the oceans, things are grimmer if less obvious. We may be halfway to a land-based mass-extinction event. And we may be right up next to a tipping-point—a point of no return—regarding climate change. The tipping point is when small changes introduced by humans cause a runaway process that self-magnifies. For example, slightly warmer temperatures melt sea ice, the sea ice is no longer present to reflect heat back out of the atmosphere, causing the oceans and previously frozen tundra to absorb it instead, accelerating climate change. At the same time, the newly exposed tundra releases millions of tons of previously sequestered carbon into the atmosphere, accelerating the rate of warming and sea-ice loss. The system has run away. There are dozens of these processes documented, and it is unclear how many of them have reached the self-accelerating point.

Human-induced climate change is rolling, and it is going to kill most of us, and most of what we care about. This is going to happen soon, perhaps in two to three generations. The oceans are very likely to rise several feet in most of our lifetimes. The weather will get crazier and crazier, superstorms will become mundane, droughts and floods being the least of our worries. Famine and war must follow, a humanitarian catastrophe of unprecedented proportions.

As if that were not enough, climate change is hardly the only existential threat we face today. The cold war is over, but not all of the weapons are accounted for. Nuclear proliferation is a fact of life. Iran and North Korea are working day and night to create nuclear bombs and the means to deliver them. These, again, are the least of our worries. Pakistan and India each have, pointed at one another, enough nuclear weapons to destroy the world several times over. This politically unstable region is extremely volatile.

It may be only a matter of time before an Iranian or North Korean weapon begins a destructive process that is mutually assured. Or before Pakistan or India begins the end of the world, or before nuclear weapons in non-state hands are detonated.

We are done for, and there is nothing, not one single thing, any of us can do about it.

We are trapped inside Lu Xun’s iron house, just waiting to suffocate. We can sleep through the end of the world, lulled into somnolence by endless coverage of the Jodi Arias trial and Dancing with the Stars. Go to work every day to pay our student loans, vote for whoever the banks and corporations put in front of us to vote for, send our kids to school to learn the same stuff we learned. And slowly suffocate.

Lu Xun thinks it might be kinder to let everyone just sleep through death. And he also says that perhaps, if everyone were awake, there might be a chance of escape for us.

What Lu Xun did not anticipate was how eager people were to remain asleep. None of these facts are secrets, and yet action is invisibly small. Our government squabbles about imaginary debts in imaginary money, about gay marriage, about gun rights, as if any of these things are of any consequence next to the destruction of our whole habitat. And we keep voting for them. Over and over again. People want to stay asleep.

We are past a time when it is functional to deny either death or extinction.