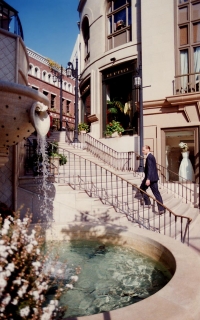 There are two moderately sized communities at the western edge of one of the most fertile valleys in the world. Both communities are nestled close by the ocean, enjoying the luxury of comfortable days and cool nights. Both are made up of multiple cultures and are world renowned. Less than an hour’s drive separates them by distance, yet by any other measure, they exist in two separate worlds.

The town just to the north of the lush valley is a town of migrant farm workers and retirees. More than 80 percent of the population is Hispanic, and more than half of that group does not speak English. This town serves as the headquarters to some of the world’s largest producers of fruits and vegetables—names you would recognize in your local groceries’ produce sections. This is a community hit hard by natural disasters, as well as economic downturns. Unemployment is almost twice that of the rest of the country, and as you stroll through the downtown, you see one closed storefront after another.

Many of the storefront windows are loaded with gang graffiti, and the park in the middle of downtown is filled with unemployed workers—many of whom reek of alcohol or have the hollow look of a drug addict. As you walk down the residential streets of two-bedroom bungalows, you notice multiple cars parked in front of them. Those cars parked along the street and in the front yards are in various stages of disrepair, most just barely able to run. With closer examination, you realize that multiple families and generations inhabit these small homes. There are very few indications of hope or optimism as you talk with the locals.

On the south side of the abundant valley is a community filled with Hollywood actors, captains of industry, and retired politicians. The residential streets are narrow and quiet. The homes range from small bungalows to mansions. The cars in the driveways are expensive luxury models, and most less than two or three years old. The residents of this seaside village are clothed in the most recent fashions, and wear jewelry meant to indicate the individual’s membership in the top 10 percent—perhaps even the top 1 percent—of our nation’s most wealthy inhabitants. The demographics of this community are diverse—there are people from nearly every continent on the planet. As you stroll the streets of downtown you hear languages from every corner of earth—Europe, Asia, Africa, the Middle East. There are few empty storefronts, and as you wander into the businesses, you realize the merchandise is not for the casual middle-class tourist. Whether the individual be from Japan, Germany, Russia, Jordan, or some other nation, the sense of self-import and entitlement seems to exude from their pores.

These two communities serve as excellent examples of the growing gap between the haves and have not’s in our country. They are samplings of the economic, political, and social disparity that currently exists in our nation.

The northern town suffers from a lack of resources for basic social services such as food for the hungry, adequate shelter for the homeless, job training for the unemployed, and suitable health care including sufficient mental health care. Every day, inhabitants of the community pick the rows and rows of fruits and vegetables that feed cities and villages all across America. All the while, many of these field workers work for less than minimum wage because they are paid in cash at the end of each day.

The southern village, meanwhile, has copious amounts of food frequently offered in a considerable assortment of cuisines from around the globe. Shelter is abundant, and joblessness is not an issue. Health care providers are profuse, including an ample number of providers of plastic surgery, cosmetic dentistry, and other body-enhancing services. Therapists are plentiful for the worried well, and are able to garner a very comfortable income.

In his entry at this site on May 28, Richard Bargdill stated, “Existential Psychology is fundamentally about community building.” The strength of existential psychology in relationship to these two communities is its ability to speak truth to both groups. Paul Tillich is reported to have once said his calling was to comfort the afflicted and afflict the comfortable. The call of existential psychology for these two communities is to follow Bargdill’s and Tillich’s lead. Communities like the northern town need our advocacy and our presence. Communities like the southern village need us to confront them and challenge them to look beyond their own selfish pursuits.

Existential psychology calls us first to notice the plight and predicament of the people around us, and then to respond in a way that brings purpose and healing to both the individual and the community.