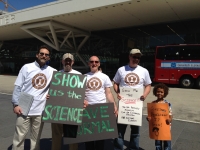 A few Sundays ago, I attended a protest at the American Psychiatric Association Convention in San Francisco with my Saybrook colleagues, Kirk Schneider, Kristopher Lichtanski, and Shawn Rubin. We attended because of our concerns about Diagnostic and Statistical Manual of Mental Disorders (DSM-5) due to be published next month. Despite numerous strong critiques of this new manual that have been coming from mental health professionals, this book has already been on bestseller lists based on pre-orders. Saybrook University and the Society for Humanistic Psychology have been among the leaders in voicing critiques of this manual. However, the critiques are quite widespread.

It would have been easy to take a more radical approach, and other groups have done this. However, our willingness to take a balanced approach has brought about credibility. Recently, I had two interviews about the DSM-5 and the concerns about this manual. In one, it seemed evident that the reporter was frustrated that I would not provide anything “juicier.” While sensationalism may draw more attention, it does not bring with it credibility.

Personally, I am glad that other groups are also drawing attention to the DSM-5, and I hope that this leads to a much larger conversation about these concerns. As this occurs, I hope humanistic and existential psychology can remain a balanced, credible voice rooted in good scholarship and clinical wisdom.

The Heart of the Concern
There are many places where readers can find a more in depth discussion of the concerns about the DSM-5, so I will not review all of them in this article. Instead, I would direct readers to the following resources:

However, let me briefly highlight some major concerns:

1.    Science: Many of the new diagnostic categories have been criticized for being based upon questionable reliability by the DSM’s own standards. Thus, even from within its own epistemological framework, the DSM-5 has significant weaknesses.

2.    Peer Review: While the DSM-5, during in its development, proposed that it was an open process and receptive to feedback, the evidence does not support this. The Society for Humanistic Psychology’s open letter-turned-petition gained nearly 15,000 signatures and was endorsed by many major mental health organizations around the world. In this letter, there was a call for dialogue and an external review. This was denied. The American Psychiatric Association demonstrated that it was not open to conversation or alternative perspectives even when there was a strong voice of concerns by many mental health colleagues and leaders in the field. The DSM-5’s alleged attempts to be open failed as they went around a more thorough and objective peer review process.

3.    Ethical: The DSM-5 is lowering many diagnostic thresholds, which will drastically increase the number of people with a diagnosis. As medication continues to be advertised and purported as the first line of treatment, this means many more people will be stigmatized and then placed on medications that have sometimes serious and unknown long-term side effects (they are not old enough to really know the long-term effects) despite safer alternatives.

4.    Economic: There are at least two serious economic concerns with strong implications. First, there exists a serious conflict of interest in that well over half of individuals serving on the DSM committees were also on the payrolls of pharmaceutical companies. Second, while it is touted that the lowered diagnostic thresholds will help with access to mental health, I am not convinced. The insurance companies are well aware that the APA is, in essence, changing what is considered a mental illness to get more money out of them. It is likely that the insurance companies will respond in a way to protect themselves and, in ways, they need to. This may dramatically increase the costs of health care, particularly if it contributes to placing a large number of individuals experiencing temporary life distress onto medications for a long-term period. This impacts everyone. Additionally, it is likely that insurance companies may respond by demanding more evidence to justify treatment, which could mean that many people who really do need treatment will be put through greater scrutiny and possibly have difficulty getting access to treatment. Therapists may see an increase in documentation required to support the need for treatment, particularly when longer-term treatment of more serious issues is warranted. There are better ways to work to assure that people who need treatment have access to it.

5.    Sociopolitical: Already, individuals representing various forms of diversity, including cultural diversity, are more likely to be diagnosed at higher rates than the dominant culture. This labeling can be used in ways to exert power over these groups through stigmatization and furthering group stereotypes. It is likely that the lower thresholds will disproportionately stigmatize these individuals. Additionally, vulnerable populations, including the elderly and children, are already seeing the largest increases in prescriptions of medications. This will likely get worse.

Conclusion
As we stood on the sidewalks outside the Moscone Center in San Francisco, we knew many people who walked by would discard us as extremists. However, if one were to step back to take a more objective look, it quickly becomes evident that the extremists in this case is the perspective of the American Psychiatric Association as evidenced in the new DSM-5 manual. It is clear that this manual in many ways meets the criteria of a polarized position, as it represents a “fixation on one point of view to the utter exclusion of competing points of view” (Schneider, 2013, p. v). The American Psychiatric Association demonstrated polarization in rejecting the widespread call for an external review by qualified experts.

Yet, even if we are considered the extremists, rebels, or radicals, there is often a place for this. As Rollo May (1975) stated, “Recall how often in human history the saint and the rebel have been the same person” (p. 35). While none of us protesting the DSM-5 would claim to be saints, I am confident that in this situation we are on the same side as the saints.

Schneider, K. J. (2013). The polarized mind: Why it’s killing us and what we can do about it. Colorado Springs, CO: University Professors Press.