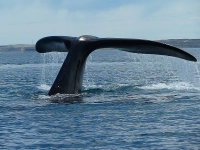 There was a moment in the ER that I’ll never forget. My mother had just been transported from the island she lives on near Seattle to the major trauma hospital downtown. My sister was visiting from Los Angeles and had gone whale watching with my mother that afternoon. My mother, 82, and not too mobile, insisted on getting on the boat that was just about to leave. Although my sister was reluctant and wanted to put it off for another time, my mother responded that she didn’t know how much longer she would be around, and so she wanted to go now. They saw whales, they talked to the other passengers, they ate food—and on the way home, my mother got violently ill. After hours of this, my sister called 911, and the paramedics came and took her to the local hospital. She had a scan that revealed internal bleeding.

I met up with her at the ER. The vascular surgeons came in, asked questions, and explained to us exactly what was going on. The abdominal aortic aneurysm that she had had repaired 14 years prior had ruptured. There were three choices: two, were different ways to do the repair surgery, and the other was to not do anything and make my mother as comfortable as possible. They were calm, clear, and kind in their explanation. I was certain my mother would agree right away to the least invasive surgical procedure. Instead, she said that she needed a few minutes to think about it.

I was stunned. I wanted to respect her need to think it over, but inside I was alarmed. Why would she need time to decide? Did she not fully understand what was happening here? I found myself quietly and lovingly pleading with her. I explained it all again, as if she hadn’t just heard it from the team of surgeons. Time to decide whether to live or die? What was she thinking?

That moment will forever be in my memory, as vivid as this present moment.

She looked fine. She had no pain. She was deciding if she was ready to die. Now, my mother has always had a flair for the dramatic, but this was different. She was making an honest assessment of her situation. But I was asking her to try. I was asking her to say yes. She conceded to surgery, and within a few minutes, she was being prepped and I began the hours of waiting.

The surgeon said that she had lost more than 50 percent of her blood volume. She was in the ICU for a week with a breathing tube, feeding tube, and various other plastic receptacles, buzzers, and monitors attached to her. The first few days were more like a series of vigils. My sister and I took turns. Being there became routine. Pre-existing health complexities affected her recovery. “ICU psychosis” set in. She was disoriented, confused, and delirious. She couldn’t speak, with the ventilator, so the times she was awake and needed to communicate, she used a makeshift letter board and spelled out words. At one point, she spelled out “dying” and moved her finger in a question-mark motion. We assured her this wasn’t the case. A few times, the ICU nurses attempted to remove the ventilator to she if she was able to breathe on her own. The first attempts, my mother would become anxious and agitated, so they were unable to continue. One attempt left her in A-Fib, which then had to be treated before another attempt. After a few days, she was able to breathe on her own.

Almost two months have passed since my mother’s surgery, and she is still recovering. Her wounds were slow to heal, and she contracted an infection, landing her in the hospital for two more weeks. Just yesterday, she was moved into a new skilled nursing facility and became agitated and delirious again. More transition, more being away from home, more IV antibiotics.

I keep going back to that morning in the ER. Is she suffering so much now that it wasn’t a good idea to go through with the surgery? It’s an awful question, but I ask it nonetheless. What was she really considering in those moments before they took her away? Did she somehow know it would be this rough? Was there such lack of meaning and purpose in her life at that point that she just thought she might be ready? She had the right to choose for herself. Did I interfere?

Yet, it seems like a miracle to me, or at least transcendent, that she chose to go on that whale-watching boat. She didn’t know how long she would be around, she said. And if she hadn’t gone, she wouldn’t have gotten sick. There would have been no paramedics or trip to the local hospital, and no transport to Seattle.

I vacillate back and forth, my thoughts providing me with wrenching considerations that run the gamut between Kantian Ethics and logotherapy. I have no conclusion, per se, and I don’t necessarily think I need one.

My mother remembers nothing of the ICU. This is probably a good thing, at least. I’m hoping that at some point, she will find meaning in this chapter of her life, and perhaps more so in her life in general. Maybe that’s what this time is for. I am grateful for more time with my mother. As hard as this all has been, it has awoken in me a deeper coming to terms with the vulnerability and finitude of life, and the need to grasp ever more fully what that means for living.