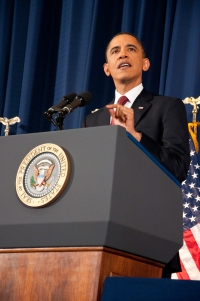 “People want leadership, Mr. President, and in the absence of genuine leadership, they’ll listen to anyone who steps up to the microphone. They want leadership. They’re so thirsty for it they’ll crawl through the desert toward a mirage, and when they discover there’s no water, they’ll drink the sand.”
–Lewis Rothschild, The American President (1995)

In the shadow of the Supreme Court’s rulings concerning the Defense of Marriage Act (DOMA), California’s Proposition 8, and the 1965 Voting Rights Acts, our country is in search of myth. This search for myth is not a seeking out of fantasies or Peter Pan’s Neverland, but rather a quest for personal meaning and a sense of belonging or connectedness. Our country was founded on myth—a myth that this country was a divinely ordained new beginning for the world, where the problems of the old world would not be present. In this new society, there would be no poverty, no joblessness, no injustice, and no crime. This new world would provide equal opportunity to each individual and family unit to succeed and flourish. This new start would bring abundant hope and blessings upon anyone who came to participate.

More than three centuries later, we are a society divided, with new chasms between cultures seemingly appearing each day. Multiculturalism is no longer a reference to neighborhoods populated by various ancestors of northern European countries, but rather refers to cultures from every continent on the planet. Freedom of religion is no longer just the various brands of Christianity, but now encompasses religious and spiritual practices ranging from Muslim to Hindu to Pagan. The definition of marriage has evolved from a woman becoming a man’s property through marriage to the growing acceptance of same-sex marriage. The definition of life is argued vehemently, each position vilifying the other.

Today, many of the citizens of the United States feel lost and isolated. Some desperately seek meaning by attaching to causes he or she deems as fundamental to their personal wellbeing as well as that of our nation such as gun rights, pro-life, heterosexual marriage, or American dominance around the world. Some seek meaning by withdrawing from society into their own private world, choosing to live by a personal code misunderstood by those outside. But most just muddle on from day to day, paying little attention to what is happening around them.

The myths on which our country was established disappeared long ago, and there is nothing in place to fill the void left by these shattered myths. How did we lose these myths so central to our identity as a society?

As the Great Awakening took hold across our nation, myth was replaced with fact. Myth is rooted in mystery; myth is choosing to believe the mystery rather than holding a fact. Rationalism insisted that belief must be grounded in fact, whether it is a matter of government policy, religious teaching, or philosophical thought. In the grips of rationalism, it is no longer acceptable to simply hold a dream or a vision; one must have data, proof that the dream is realistic, or the vision achievable.

When the individual, or the family, or the community, and even a nation are stripped of their desire to have dreams and see visions hope is decimated and grace is denied. The myth of caring for those in need has been replaced with the need for individuals and families to prove their need—Congressman Paul Ryan has gone as far as to suggest that anyone who owns a car does not need food stamps. The myth of community has been replaced by the need for logical agreement. If we do not hold the same perspective, or the same values, we cannot share community. The myth of obedience has been reduced to simply following rules with no flexibility for compromise or change.

Myth is about faith, faith in mystery, and fundamental to faith is trust. We no longer trust one another on any level. Mistrust has permeated our culture to its very core in such a way that any person or group proclaiming a different or new perspective or knowledge is attacked verbally—and sometimes physically—just because they are different. The myth of tolerance is not honored; rather, compliance is the order of the day.

The problem is that without myth, we will not survive. Myth is critical to the survival of the individual as well as the community. Myth is what enables us to live with the paradoxes in our lives. Myth sustains our ability to see beyond this moment, to have dreams for hopeful future, and have visions of a brighter and better life.

Rollo May points out in his book The Cry for Myth that many of the clients we see are individual in search of myth—the myth of self-identity, of community, of morality, and of mystery. Our role as existential therapists is to assist our clients in establishing or re-establishing those myths that enable him or her to live a full and vibrant life. Our role is not to create myth for the individual, but rather walk with the client as he or she deconstructs those myths that no longer hold meaning, and at the same time, empower each client to establish new myths that give his or her life and relationships meaning and significance.

Without myth we are like a race of brain-injured people unable to go beyond the word and hear the person speaking.
–Rollo May, The Cry for Myth (p. 23)