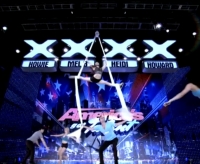 I never thought it would happen to me.

I’ve spent a good portion of my life railing against this kind of activity—coming up with all the reasons—the aesthetic as well as the elitist—for why I should not participate. But now, it’s happened, thanks to an innocent request from my 10-year-old nephew, Judah, to watch with him—“You HAVE to see this!”.

For those of you who don’t know what America’s Got Talent is, it is one of the plethora of reality shows now on television that purport to showcase talent in a competition for money and fame, the bastard child of the vaudeville shows, game shows, and beauty pageants that preceded them. Most famous of these is perhaps American Idol, which has a similar format—celebrity judges give a thumbs up or down to hundreds of performers as the field is gradually narrowed down over the course of the season. Viewers also express their preferences by texting votes for their favorites, not to mention endless discussion and debates with co-workers and friends after each episode.

Before I started watching, I often divided the world into two types of people: those who watch reality television and those who don’t. I always prided myself on being part of the latter category, believing it to give me some sort of extra credit, although I don’t know for what.

However, I have discovered a certain joy in watching America’s Got Talent, one that speaks to a larger need in our society—a need for a safe place to feel all our feelings. While watching each show, either with my nephew or alone, find myself experiencing a huge range of emotions. Most obviously, I feel joy for winners, or anger or despair for losers, especially for those with poignant backstories, which the contestants often tell in interviews prerecorded before their performances for the judges.

In addition, some performances, such as an Asian woman balancing on unicycle attempting to flip ceramic bowls onto her head, create tremendous suspense. Another, in which a man’s “act” included eating “the hottest pepper in the world” while sitting in a tub of ice, evoked some real disgust. Amazing magic tricks elicit a sense of awe and wonder while off-key singing and left-footed dancing bring out pathos.

And amidst all of this, there is a constant sense of humor, fun, and camraderie coming from the four judges—Howard Stern, Howie Mandel, Heidi Klum, and Mel B (formerly of the Spice Girls)—as well as the host, Nick Cannon. They also provide a support and structure for the show that they themselves have likened to a family. Following an exquisite vocal performance by a 20-year-old man who spoke beforehand of how his biological family had kicked him out at 18 for being gay and still refuse to have contact. After listening to his magnificent voice, Howie Mandel, usually known for his comic antics, said to this performer that while it was very sad that his biological family had rejected someone so beautiful and gifted as he showed himself, that he had now had a family here in the community of this show. Mandel’s words were completely sincere, and there was not a dry eye in the house—the theater or my own.

In My Quest for Beauty, Rollo May (1985) says, “The artists, including any and all of us who choose to create, or “make imaginatively, are the ones who bare themselves to the experience of essence. … Their vocation is to communicate it to others” (pp. 208-209). For the performers who bare their souls when they perform live for judges, a large live audience, and an even larger television and internet audience, the experience is highly cathartic. But those of us bearing witness to their experiences also get to taste this experience of the essence, as May describes. In a society where psychotherapy is still considered shameful in certain circles, watching America’s Got Talent allows those who might never set foot in a therapeutic setting to feel their feelings, mostly in safe, appropriate ways.

The competition on America’s Got Talent is not the stuff of bar fights or street fights. Nor does it leave its viewers mired in hopeless despair. But it does allow viewers to touch these emotions—safely—and then return safely to the fantasy of fame and fortune and alleged happiness that brings. The stuff that dreams are made of. And in a world full of painful realities, America’s Got Talent has created a safe space to feel pain and anger, as well as joy, fun, and hope, is not a bad place to spend an hour or two a week.