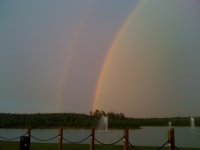 In one of psychology classes I teach, we were talking about experiences of the sacred. Only about half the students, through a show of hands, would admit publicly to having had such an experience. We decided, as class, to write a reflection on what people had experienced, and at least, called the sacred. Then we would see if we could find some commonalities the next day.

I could tell by some of the questions that were asked that “sacred experience” was topic that was somewhat foreign to them. They wanted to know if it had to be a “religious” experience or, if certain things could “qualify”—as if there was a sacred experience checklist! I decided not to answer specific questions at that time but to see what people described so that the next day we would be able to draw our conclusions.

I started the following class by asking “where” their sacred experiences happened. I was just interested in breaking the ice since I could sense some hesitation in their willingness to discuss the topic. Once again, there seemed to be some uncertainty about the “correctness” of their experiences. The places were quite interesting as students suggested their experiences had occurred at: work, a hospital, a playground, a religious site, and finally (I was waiting for this to make the list and it eventually did) in nature. The very first student to respond had probably the most amusing location; he said his sacred experience took place at a gas station. The best part of his story was that the sacred could happen anywhere, even the most common and least majestic of places.

As you might expect, the hospital stories involved near death experiences that had produced a sort of trans-valuation of values—at least temporarily. In other words, the big things and the little things in a person’s life flipped over. Students recounted that they had been interested in money, success, and recognition, but in the existential moment that one’s life is brought before one’s self, the more mundane things showed themselves to be of real value: friendships, family, time spent with one’s hobbies, etc. The little things in life are the big things.

Work experiences concentrated on rare but meaningful moments when true caring occurred at institutions where caring is supposed to happen but infrequently does. In one case, a nursing student was asked to sit in complete darkness with two hospice patients who seemed on the verge of death. She was struck by how we die alone and here, she—a total stranger—was spending the last few hours of life with two people who had no family or friends, to be present with them at the end of their lives.

In another case, a student worker was assigned a nonverbal autistic kid who she took to the playground every day for a whole summer. One day while alone at the playground together, a bald eagle circled the playground and landed on a tree. The student and the autistic child both looked on in amazement. The autistic child made eye contact with his caregiver, pointed at the eagle, and attempted to say something. In these cases, the true connectedness between human beings broke through the students’ ordinary ways of understanding one’s self and others. The feeling of being connected to a larger humanity community was revealed.

Both the religious site experiences and the experiences of the sacred in nature had the same thematic gist. One experience occurred in an ancient church and the other on an isolated cliff at sunset. Both included an enhanced sense of beauty as well as the feeling of being privileged simply to be present so that one could see and feel what was there. The churchgoer was struck by the fact that she was at a dwelling where millions of human beings over a number of centuries had travelled to pray there. The beautiful images and stained glass and burning incense all led to an elevated and complete sensory experience. She reported being humbled by it all. The cliff climber was at a remote beach location and climbed up a large rock face. She and her sister reached the summit at sunset. She reported that the colors and beauty of the sunset and the vastness of the ocean were like nothing she had ever seen. She felt like a small but important piece of the universe. She reported both feeling privileged to see this sight and transformed in some indescribable profound way.

The sacred is beyond language, or at least ordinary language. Most students described heightened senses or seeing colors in particularly vivid ways. Their experiences encompassed a combination or complexity of emotions. That is, things could be “tragically beautiful,” or awful and awesome simultaneously. The sacred seemed to be a total human experience bringing on the feeling of being “overwhelmed” by meaningfulness. The sacred seemed to include some kind of physical sign such as the welling up of eyes, goose bumps on the back of the neck, or a general star-struckness that left the student gawking in silence. Maybe, a sacred experience is feeling all the things that a human being is capable of feeling—at once!

One of the fascinating similarities between the sacred and psychology is that the old term people used for a therapist was to call that person a “shrink.” The idea was that the therapist helped to shrink a person’s own evaluation of one’s self-importance. This is what the sacred experience appears to do. In fact, we might say that depression is to feel small and insignificant, while the sacred means to be small but connected. The disappearance of the sacred in our culture is disconcerting, but maybe not surprising, given the emphasis on individuality. The sacred seems to be in a reciprocal and inversely proportional relationship with the self—the bigger the sense of self, the less the sacred appears [SELF⇔sacred]. The more the sacred is felt, the more the self appears to be a small but important part of the whole big universe [SACRED⇔self].

Finally, the students felt that the sacred experience had transformed them as people. This transformation was immediate, semi-permanent, and completely unforgettable. This transformation was for the better and appeared to be a kind of kernel of deep insight or wisdom. Some students suggested it “restored their faith in humanity” or that they now see “every living thing is important.” The most common overall message was that we are really brothers and sisters, we are a small part of something much bigger, and it is an honor to be given a chance to see and understand even a tiny little portion of this thing called “life.”