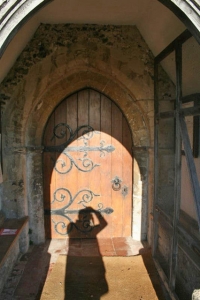 I recently watched a Korean movie entitled 3-Iron. I am reliably informed that the original Korean title is Empty House, somewhat more evocative.

The movie follows a young man who breaks into empty houses or apartments and lives in them for a day or two. While there, he repairs small appliances, does laundry, and generally leaves each place better than he finds it. In addition, part of his ritual is to photograph himself in each home, usually standing near a family portrait.

What is he seeking in these places? Is this part of the ritual just a joke, a prank the homeowners will never discover? Or is there something more in this action, a need to relate, to belong?

In one such house, he discovers a young woman who is clearly victim of domestic violence. He quickly leaves the house, but something about her draws him back.

Here we encounter the title artifact of the movie. When he returns, he confronts the man of the house. While the husband is dressing down the strange woman, the visitor goes out back and begins whacking golf balls at a net designed for that purpose. Eventually, the husband has to go out to investigate, and then the young man drive a few golf balls at him, disabling him long enough for the woman to escape.

The names of these characters are not obvious, because the young man proceeds in complete silence throughout the film, and the woman he adopts emulates his silence. Indeed, she begins to accompany him through his strange life. They tape fliers—advertisements for food—on every door in a given neighborhood. The ones not removed at dusk are the ones where nobody is home, and they begin to live this nomadic life together. She even begins to help with the household chores: light repairs, cleaning, laundry.

The man now carries around a 3-iron. He seems a little obsessed with it. He practices his swing in the park while the couple waits for dusk. Eventually, the woman begins to interfere with this obsessive practice by standing in the path of his swing, never speaking.

In the end, the two are caught. Some violence ensues against the young man, who is carted off to jail. This is where things become weird. In jail, he begins to disappear. At first, he hides against the wall that has the door. The jailer, unable to see him, storms in raging and beats him. Next, he hides above the door. Same result. Then he begins to move very quietly. The third time he is hidden, and the jailer storms in. He stands close behind him, circling with him, remaining unseen. He is given away in the end by his shadow. And the jailer tells him this: you are very crafty, but you’d best learn to guard your shadow.

And finally, he disappears completely. He becomes a sort of ghost, invisible, completely hidden from view. From here, he begins to visit the people who hurt him, pelting them violently with golf balls. And he visits all the homes he has used before, upsetting something small in their order, sensed but not seen.

At the close of the film, he has returned to the home of the abused woman. He stands behind her husband, unseen by him but seen by her. She relates to him, now with her voice returned, speaking to her husband but meaning her words from him. He takes food from the table when the husband is not looking. He is both completely gone and completely present.

As I am not Korean, and the film is immersed in Korean culture, it is doubtful I can speak to all the layers of meaning. One might wonder, for example, whether this ghostly young man is a reference to a particular type of specter from Korean legend. At the same time, the film is deeply evocative across cultures. It is beautifully shot, juxtaposing old and modern Korea: Western-style boxing with old architecture; male hierarchical family structure with daring use of nudity (not a usual feature of Korean film).

The Western title of the film, 3-Iron, focuses the viewer first on the object of obsession and violence throughout the film. And both obsession and violence are present. The principle character seems reluctantly violent at the start and increasingly disturbed as he suffers several injustices. He seems obsessed with the golf club, and behaves ritualistically, repetitively, until at the end, he begins to undo some of his work.

The Korean title of the film, Empty House, orients the viewer more to the empty spaces in which the principle character inserts himself. He does not really steal the homes, just makes use of something currently idle. While he does help himself to the food of others, he pays for it with quiet, unasked-for service.

The houses he inhabits are empty, and so are the relationships that take place there, to some extent. We see domestic violence, unhappy marriages, a man who uses women just for pleasure. The principle character inserts himself not only into empty spaces but also into empty relationships, photographing himself with the family portraits of others, portraits that capture a brief happy moment but nothing of the complexity or ultimate emptiness of the lives he samples.

And is he himself empty? He appears to have no intentions, no long-range plan for his life, no ambitions. He does not speak, at least not on camera. If he feels anything for the woman he “rescues,” it is not evident. Nor does he seem terribly vengeful, not escalating violence. The only times he seems truly distraught are when his golfing obsession injures a motorist, and when his fellow prisoners, late in the film, interfere with his imaginary golfing.

Many questions remain. Is he a real person or some semi-benign household spirit, or a kwishin (ghost)? Is the end of the movie factual, or the product of his madness? Is he mad or sane?

And questions also seem posed to Korean society. Is modern life better than traditional life? Have women really discovered any equality? Is family life better or merely empty, silent, and by rote? Does adopting increasingly Western ways improve or detract from life? Who is mad in this film?

From a few thousand miles away, it seems we could ask the same questions of our own culture, especially regarding the influence of technology and modernization. Are our lives better for Facebook and iPhones, or are we losing something, emptying out our relationships until we become invisible?

The Jungians among us will seize upon that line about the shadow. There is a shadow self here, and it is obsessive, sometimes violent, rigid. But these traits are all shown by the people in the lives our hero inhabits—in all our lives. Does he, in the end, fail to watch his shadow—or does he merge with it, incorporate it, and lead a shadow life? In any case, this is a clear indication. In this low-dialogue film, every word seems to stand out, and this line seems, more than any, directed to the watcher.

Learn to watch your shadow.