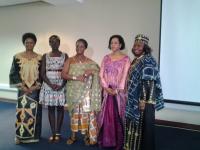 Queens. Queen Mothers. Princesses. Chieftaincies. Women Cultural Leaders. Royalty. These are terms and concepts I have encountered in folklore, books, music, history lessons and most prominently in the media with the most visibility perhaps being placed on the British monarchy. As far as I know, my community of birth — Gusiiland, Kenya — did not have monarchies, so royalty is a concept I have learned about in school. My earliest memory of a monarchy is from one of my first primary school history lessons where a fictitious elderly man “Mzee Safari” in the class 3 and 4 history text books told stories of different Kenyan communities which included the story of Nabongo Mumia of the Wanga Kingdom of western Kenya.

According to some sources, the Wanga Kingdom is perhaps the most well-known organized monarchy in Kenya. Wikipedia reports that “The Wanga Kingdom was the most highly developed and centralised kingdom in Kenya’s entire history before the advent of British colonialism in the early 1900s. When the British arrived in Western Kenya in 1883, they found the Wanga Kingdom as the only organised state with a centralised hereditary monarch in the whole of what later came to be known as Kenya.”

I really do not remember learning about African Queens as a child but I heard of Kings and Chiefs and later learned of the Queen of Sheba as well as powerful West African and Khematic Queens and Queen Mothers. Suppressed histories researcher and historical consultant Max Dashú, whom I was recently introduced to by mutual friend Lezlie Kenyon, offers some great insights on “restoring women’s cultural memory.” Dashu shares some rather informative stories about “African Queens” and warriors in an excerpt of her video “Women’s Power.”

Dashu’s research-based work reveals stories of women from different parts of the world that squarely challenge the popular myths and their narratives of weak, absent and powerless women that had no place in the leadership sphere. A myth that continues to give more visibility and power to Kings, Princes and Chiefs (male) and little recognition, if any, to the role women leaders have and continue to play within their communities’ social, economic, political, spiritual and cultural development contexts.

As I digest the impact of this ‘invisible women leaders’ narrative that continues to render women in traditional and modern leadership almost insignificant, I am reminded that I have never met a woman cultural leader in own community in Gusiiland. Cultural women leaders are perhaps a group that some of us haven’t really paid much attention to – particularly those of us from communities that do not have monarchies and are highly patriarchal with a very visible and present history of male leadership and domination. I realize that the dynamics might be different for African communities that traditionally and currently have monarchies or cultural and political structures that recognize women in leadership.

The closest I have come to interacting with the idea of cultural women leaders in my community is in draft proposals that I have written where I identify them as a critical stakeholder group to partner with in social system interventions for social transformation and human development. While I have not met or heard of a single woman within my community who is publically acknowledged as a cultural leader, I recognize that there are many women that are wonderful leaders within my community. It is encouraging to learn that while, traditionally, the Gusii community did not include women as members of the circle of elders, some women have now been appointed into the current Abagusii elders’ council and I look forward to meeting them sometime in the near future.

Dashu shares great insights from her research on “Female rulers in ancient Egypt, Nubia, Nigeria, Ghana, Congo, and Guinee-Bissau,” noting that “Africa is rich in positive female history and famous for its queens.” So why isn’t this a well-known aspect of African leadership history? Why haven’t African Queens and women cultural leaders received much attention in the leadership conversation in general?

Perhaps some history lessons might help us put this conversation into perspective. It is no secret that the African continent suffered an unprecedented cultural mutilation, attrition and corrosion with the onslaught of the transatlantic slave trade that is believed to have begun in the late 15th century. Along with the devastating impact of the transatlantic slave trade was the brutal incursion of Christianity and Colonialism that did not exactly make the situation better for Africans.

These systems that sought to dominate and sanctimoniously “civilize” Africans were an extremely unforgiving, punishing, dehumanizing and oppressive machinery of massive social hypnosis causing a lot of pain, suffering and death for the African that among other things, birthed an inevitable voluntary and involuntary relinquishing of many things that Africans had long held sacrosanct to their survival. This period in Africa’s history created a collective cultural existential crisis that the continent has not and might never be able to recover from.

Along with Her Royal Highness, Queen Nanahemaa Awindor, Queen Mother of the Ashanti in Ghana, I could not agree more with Nobel Laureate and literary scholar Wole Soyinka that Africa is “an interrupted historic entity that must be raised on the ashes of the world’s most wretched and profound miseries of slavery, colonialism and other post-prisons. These periods of dislocations and disruptions greatly affected African cultures and aesthetic values.” It is in these periods and spaces that the dignity and humanity of the African was not only stripped and violated but the social, economic, political, cultural and spiritual core structures that were the glue that held most African communities together were destroyed and/or rendered irrelevant, evil, wicked, savage and even destroyed.

For instance, in some places, artifacts of African culture and society which included African names were deemed evil and inappropriate because they were “unchristian”. So, this meant that Africans that wanted to become Christians (a status that came with certain “privileges”) had to take on western names that were presented as Christian names in order to demonstrate their unwavering commitment to embracing Christianity. In certain circles, these western names are referred to as Saints’ names or Biblical names. A phenomenon that in some places is characterized by a solid grip on many-an-African’s psyche such that, when I introduce myself by my African name Kerubo in some circles, some people ask me what my other name is, the real name – the Christian name is.

I have come to dread and actually loathe this question, but some view it as an opportunity to help me “save face” and on my behalf show my commitment to Christianity by quickly and loudly proclaiming the name I was given as a child when I was baptized in the Catholic church. Those of us who have unapologetically embraced and use our African names are perceived by some (Africans included) as deviant, rebellious and are sometimes sarcastically made fun of as having “Africanized”.

This dynamic’s psychological and spiritual roots are entangled and embedded in the history of Africa that lies at the heart of what we learned in primary and secondary school as “The Scramble and Partition for Africa”. A scramble and partition that clearly included the dismantling and violation of the social, economic, political, cultural and spiritual psyche and spirit of the human beings Africans have always been. A process largely supported by strategies embedded in “divide and rule” by the colonial British government and “assimilation” by the colonial French government helped sow seeds of ethnic strife as well as self-alienation, self-hatred and even self-loathing for some Africans who resorted to desperate measure to erase as many things African about themselves as they could, so as to more closely identify with the west and westerners. A process of brainwashing sanctioned and consecrated by missionaries and others in support of the school of thought that believes that westerners are more civilized than Africans.

African spaces that had no monarchies or had matrilineal political structures with women as leaders of their communities prompted the colonialists to change these structures by abolishing or weakening the monarchies’ powers as well as reinforcing a patriarchal order that either introduced, emphasized or reinforced existing cultures of domination, where men and boys were privileged and accorded more value and respect and installed as leaders. In her article “Challenging militarized masculinities”, Prof. Amina Mama highlights the militarized masculinities of some African societies that were perceived by the colonialists as being “primitive”. Mama notes,

“Even before war looms, the proclivity is there because the dynamic of gender is at the centre of modern Western statecraft itself – the very definition of the state includes the existence of a standing army. Societies that do and did not maintain the standing armies that characterize the modern state were not only vulnerable to conquest. They were also regarded as “primitive”. “Acephalous” was one term used by colonial anthropologists to describe the decentralized Igbo socio-political formations that Chinua Achebe and Ifi Amadiume recuperate in their writings. Patronizing depictions of alternative political systems provided justifications for imposing patriarchal and militarized systems of governance on some these more interesting precursors to patriarchal capitalism.”

Mama provides examples of spaces where these dynamics played out in Africa which should then not surprise us that African women cultural leaders who were once well-respected and had long-led their communities were rendered invisible, irrelevant and in some cases literally eliminated. She outlines,

“Colonial officers are on record as having responded to their encounters with non-militarized societies that did not subordinate women in the way that Europeans considered civilized by advocating ‘making men of the natives’ by creating armies (Mies 1986). What were initially frontier forces used to guard occupied territories from rival occupiers (Brits vs. French vs. German etc) were also used to suppress dissent. Recall that the Women’s Wars in Nigeria were suppressed using colonial forces schooled in misogynistic and ethno-religious contempt– Hausa troops were brought in to gun down Igbo women – a sad theme that was to be repeated in the anti-Igbo pogroms that erupted in the town were I grew up, as Nigeria descended into the civil war.”

I believe that this historical context gives perspective to some questions that emerge in light of the great stories of powerful and effective African Queens and cultural women leaders and warriors that led and defended their communities but that have since been made invisible in the face of a leadership paradigm that glorifies a patriarchal order aligned with what Mama refers to as “the mobilization of men into aggressive expressions of hypermasculinity – they are ‘pumped up’ and as it were to facilitate their most murderous and pornographic capabilities” in the name of modeling modern “western statecraft”.

With this historical backdrop to the conversation of the need to reopen spaces for African women cultural leaders’ participation in social transformation is the acknowledgement that there were and still are African societies that strongly align with a patriarchal order that is deeply entrenched in male dominance, male privilege and misogynistic thinking and ways of being that continue to sideline women and their participation in leadership and other spheres of community life and influence.