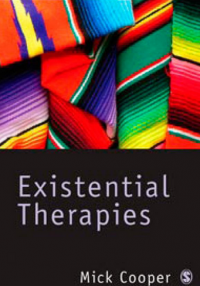 Mick Cooper’s (2003) Existential Therapies sat on my shelf for a number of years waiting for some well-deserved attention. I put off reading it knowing that it was a review of the different approaches to existential therapy, which I was already quite familiar with. Thus, I did not think I would get much from this book. In quickly searching my bookshelf for a thin book to take on the plane, I finally grabbed this book and I am glad I did.

To cut to the chase, I would strongly recommend this book to both beginners and advanced existential psychology scholars and practitioners, but for different reasons. For beginners, this book is an excellent introduction to the philosophy and therapeutic approaches. The challenge for beginners is that Cooper intentionally does not include a more in depth summary of what is shared across approaches, as his approach is more to help identify the differences. Thus, for beginners, it is good to have some familiarity with the basics of existential psychology before diving into this book.

For advanced readers, this book will be a quick read (I read the entire book on a return flight from China), and most may want to skim portions of the book pertaining to the more familiar branches of existential therapy. As predicted, I did not really learn anything new about the ideas and foundation of existential therapy. However, the organization of the book was well designed to focus more established scholars on the similarities and differences across approaches. It was really the encouragement of this process, more than the content, that I personally found highly useful. Given this, beginners may find it quite helpful to return to this book over time to continue their comparative understanding of these approaches.

Overview and Cooper’s Six Existential Therapy Schools
Cooper begins with a brief introduction followed by the longest chapter in the book, which focused on the philosophical foundations. It is curious that Cooper chose to give an overview of the philosophical origins, but did not provide a more in depth general overview of existential psychology, which could have made the book more useful to beginners. His philosophical overview was impressive, though. I tried to read this chapter from the mind of a beginner, attending to how accessible it would be to individuals who did not have a philosophical background, including those who may be scared off from existential therapy because of their fear of or lack of interest in the philosophical dimension of this approach. By and large, I felt Cooper did a good job of providing a substantive overview while maintaining accessibility.

Next, Cooper had a chapter on each of the six existential therapy schools covered in the book. It is important to note that Cooper acknowledges that these are not the only six schools of existential therapy and that there is quite a bit of variation within these schools. He began with Daseinanalysis, which was the first school of existential therapy to emerge primarily through the writings of Binswanger and Boss. Next is an overview of Viktor Frankl’s Logotherapy followed by the American Existential-Humanistic approach, particularly focusing on the contributions of Rollo May, James Bugental, and Irvin Yalom. The fourth chapter focuses on the contributions of R. D. Laing, which he acknowledges is somewhat challenging to identify as a therapeutic approach given Laing never really provided a good summary or structure to his approach. Fifth is the British School of Existential Analysis. Last, he covers the brief existential therapies.

With each chapter, Cooper provided an overview of what was unique about this approach as compared to the others followed by some critiques. At the beginning of the book, Cooper stated that he did his best to bracket his bias, but was aware he could not fully do this. It did seem evident that Cooper was biased toward the British School, which makes sense given he has been more active with this group.

Limitations
Although this book was very well done, there are some important limitations to note. First and foremost, the book is now 10-years old. The evidence of this is notable and indicates that an update of this book is warranted. In particular, the last 10-years has been an exciting and important period in American Existential-Humanistic Psychology. A number of the criticism identified have been addressed to some degree in the last 10-years.

As a representative of the American Existential-Humanistic Psychology approach, I most readily was able to identify limitations in his discussion of this approach. First, while Cooper acknowledged early on that Yalom was the least existential of the prominent students of Rollo May, he also was the least existential. Yet, he relied quite a bit on Yalom. Although Yalom has been influential and is greatly appreciated within American Existential-Humanistic Psychology, he would not likely be identified by most within this school as being the best representative of this approach. Second, it did not appear that Cooper was as familiar with the variations with American Humanistic Psychology as he was with some others. In addition to focusing on Yalom, he did not speak as much to important differences between Yalom and others in the existential-humanistic approach.

In the critiques section, Cooper appeared to include some of his own critiques along with a discussion of important critiques that had been made within the existential literature and, to a degree, the general therapy literature. However, in the chapter on R. D. Laing, Cooper did not address some of the important critiques of this approach. He did, however, clarify many of the common misconceptions regarding Laing. While, personally, I disagree with many of the critiques of Laing, I think it is important to consider them, especially if the goal is to provide balance in considering the different approaches.

Conclusion
Overall, Cooper’s Existential Therapies is an exceptional book that should be essential reading for all existential therapists, even with its current need of being updated. Without doubt, it is the best comparison of the various existential therapy approaches that exists. It is impressive that Cooper was able to do this while approaching the content in a manner that kept it relevant to beginners and more advanced existential therapists.

Lastly, I greatly appreciated the tone of the book. Cooper did not approach the different schools in a manner to set up debate about which approach is best. In fact, it seemed his encouragement was quite the opposite. I worry that debate between the schools of thought could be highly destructive. Furthermore, it is unnecessary. Existential psychology is stronger in its diversity. My encouragement would be for ongoing dialogue between the different approaches in a mutually supportive manner that clarifies similarities and differences while promoting learning from each other and integration. Existential psychology is big enough for all of us and more likely to evolve and remain relevant if we can work together to advance each of the different approaches.