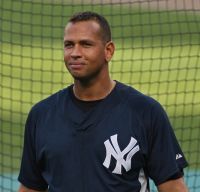 Now that baseball’s regular season has ended, and the playoffs are in full swing, it is a good time to look back at the season past. In New York baseball alone, special moments abound: the utter grace and dignity of Mariano Rivera’s season, feted from ballpark to ballpark, and culminating in the momentous final pitches at Yankee Stadium. Or the rise of the Mets’ Matt Harvey, from rookie phenom to All-Star Game starting pitcher, only to see his season cut short by injury.

But the strangest and perhaps most tragic of all is the ongoing tale of Alex Rodriguez, aka A-Rod. For those who have not seen a newspaper in a long time, A-Rod has spent the last 19 years among baseball’s elite, with 14 All-Star appearances and a truckload of statistics so impressive the eyes reel.

However, he has also been, shall we say, tainted by baseball’s performance-enhancing drug scandal. Earlier this season, A-Rod received a 211-suspension for using those substances, a decision he has been vociferously appealing, much to the chagrin of, well, most everyone.

Doug Glanville, a former major leaguer who is now a columnist and blogger for The New York Times, wrote the best article about A-Rod’s situation I read all summer. He began his piece by capturing, in a just a few lines, the profundity of the experience of being a baseball fan, starting as a kid, to looking at baseball by the numbers—in this case, A-Rod’s great statistics. Glanville wrote:

The Phillies were my favorite team, but I didn’t know their record when I drove two hours to catch them at Veterans Stadium just after I had gotten my driver’s license. I can’t recall Steve Carlton’s E.R.A. during September the year they won the World Series, or the final score of the game where I saw Harold Baines of the White Sox, who I’d never even heard of before, hit a triple and a home run at Yankee Stadium. But I do remember how I felt when the Phillies won the World Series in 1980, or when I met one of my favorite players, Garry Maddox, for the first time.

I’d like to think I am good with numbers, so memory is not the issue. Rather, despite baseball’s obsession with counting and accumulating, what actually sticks and stands the test of time are the personal experiences we share with the game.

Glanville agrees that statistics are part of the fun of baseball—we root for our favorite hitters to win batting titles, based on the highest average, or our favorite pitchers to give up the fewest runs or win the most games. And indeed the teams who score the most runs win the game, and the teams who garner the most wins usually make the playoffs, earning them the chance to win the World Series.

What strikes me about Glanville’s discussion, in which he describes A-Rod’s quest for statistical gold while allegedly sacrificing the meaning behind those numbers, by “cheating” to obtain them, is that Glanville is providing us with a great metaphor for qualitative and quantitative methodologies. What are numbers worth if we don’t know the experiences and meanings behind them? Glanville said, “Numbers can have meaning because of what we bring to them. Their value, and meaning, may change over time. But when all that matters is the numbers, you have zeroes.”

In their essay on integrating qualitative methods into psychological research, Camic, Rhodes, and Yardley (2003) noted John Dewey’s suggestion “that all inquiry and evaluation, whether scientific, moral, or common sense, is ultimately concerned with the question of what things are good for” (p. 7). Furthermore, the authors refer to Shweder’s (1996) discussion where he looks at the differences between quanta—from the Latin quantas meaning how much—and qualia—from Latin quale meaning what kind.

The implication here is that although qualitative methodologies have long been eschewed by the so-called hard sciences with their reliance on quantitative methodologies because of the former’s alleged lack of rigor, and indeed, lack of statistical data, is that the two actually complement each other.

As existential psychologists, we work with data that is actually human experience, each one individual and irreducible. I could give you a set of statistics about me—my date of birth, my height, my weight, my college GPA, my annual income, my number of dependents—but what would that tell you about how I am in the world? We know that A-Rod has hit 654 home runs, fifth place in history, that he has a career batting average of .299, that he has one World Series ring, but would that tell you whether he should be suspended from baseball for violating the rules and using performance-enhancing substances.

I’ve actually learned more about A-Rod the person from watching how he’s handled this crisis. He has shown no humility, no remorse, and has tried to come off looking like the poor pathetic victim in this scenario. His manager and teammates seemed to want him to do well ONLY because they were sentenced—by A-Rod’s appeal—to continue to have to play with him side-by-side and it is obviously counterproductive to winning to wish one of your teammates ill.

Numbers, however, still have an important role. But as Glanville said, they have to be placed in the context of the experience. And sometimes, especially in baseball, we might want to erase one or the other to preserve a childhood or other memory or an icon. For example, despite the performance-enhancing drug scandal, I still have a soft spot in my heart for Mark McGwire, having seen him hit home runs number 60, 61, and 62, to “break” Roger Maris’s record during three games in St. Louis against the Chicago Cubs and Sammy Sosa, who came in second in that race, and having met McGwire on the field earlier that night. Do I wish McGwire and Sosa were not implicated in that scandal? Of course. Does that taint their numbers? Of course. But does that change those three special games for me. Not really.

It is the great trick that the game played on him. You can take performance-enhancing drugs to fool the game into believing that you dominated and endured. You can break records that seemed unbreakable. It can all lead to a contract that surpasses the gross domestic products of some nations. But as the drugs give your stats greater value, they take away everything else. They turn around and destroy the qualitative and sustainable inspiration you could have provided, maybe to fans like me when I was young. Numbers mean nothing when you stop knowing what they are actually counting and why.

There used to be a reason we were counting. It helped build a story.

Numbers without a story are just numbers—meaningless, abstract. Camic, Rhodes, and Yardley (2003) remind us of Norton Juster’s The Phantom Tollbooth, where the kingdom of Wisdom was divided when King Azaz, ruler of words, and his brother, the Mathemagician, could not get along, and arbitration by the princesses Rhyme and Reason fell on deaf ears. A world where quantitative methodologies exist without qualitative methodologies poses a similar problem. How can we know if the numbers have real meaning—their own unique tales—or if they are just arbitrary abstract representations of “statistical significance” and mathematical rules?

Some baseball numbers can put us a certain time and place where we can reconstruct a narrative—for example, say Game 6 in 1986 to a Mets or Red Sox fan. Others, like A-Rod’s 654 home runs, only give us digits, not the story of how many he hit with or without pharmacological assistance. What Glanville has reminded us is that humanity—and that includes baseball fans as well as psychologists—cannot live on just numbers alone. Like those in the Kingdom of Wisdom, we need to invoke Rhyme and Reason to bring together words and numbers, Qualia and Quanta, stats and stories, if we really want to have any chance at finding knowledge, or dare I say, truth.