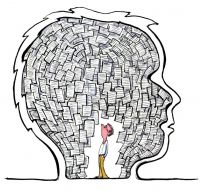 There is greater power and vitality in what we believe than in what we know. In a culture that places an alarmingly high value on knowledge, such a statement may sound questionable at best, or at worst merely absurd.

However, consider the range of its potential implications. In general, our American ethos does seem to excessively emphasize the importance and role of knowledge in our lives. This is undeniably represented by the ubiquitous clichéd slogan “knowledge is power,” transmuted into an information-driven social current that flows inexorably toward one all-consuming goal: knowledge acquisition. In this digital age of internet supremacy, we are indeed conditioned to think that acquiring knowledge, in terms of information, makes us better and more powerful, bestowing upon us necessary advantages or benefits that we cannot live without.

But shouldn’t we critically question this insidious, reigning assumption? For a closer examination of actual experience seems to suggest otherwise. Consider those who appear to know a lot of information, who have amassed great storehouses of knowledge. At first, we may be impressed by all that they claim to know as well as how they verbally articulate it. Yet, aren’t we often left wondering what it’s all worth, looking in vain for something real and genuinely meaningful underneath the hollow facade of apparently useless information?

Such people don’t strike us as legitimately powerful individuals who can offer us valuable and beneficial wisdom, but rather as weak, empty creatures who are compelled to hide behind a dazzling smokescreen of soulless knowledge. They do not fool us, and we quickly forget what they have said because it doesn’t really matter. Lacking in true substance and vital meaning, we rightly discard it like straw into the fire, for it will only hinder and not support the dynamic growth of Reality within us and our world.

Abstract knowledge, in and of itself, is ultimately meaningless if not grounded in the vivifying wellspring of conviction. An infinite mass of static information cannot compare to a lone, struggling seed of genuine belief. The former imprisons us within a two-dimensional desert landscape, a world without color or sound, while the latter releases us into a universe alive with heart-pounding meanings, refreshing and enlivening our senses.

Now, my purpose is certainly not to construct and advocate for a false dichotomy between knowledge and belief. Ideally, I would say, our beliefs should be based on critically evaluated knowledge and the knowledge we have gained should be rooted within a framework of passionately-affirmed beliefs. The essential problem, I suggest, is precisely the fact that this vital, unifying interrelationship has been severed, leaving us with a detached knowledge that is tragically impotent set against a personal belief structure that is comically ridiculous or blatantly dangerous.

Indeed, it surely would be unbalanced and inadequate to exclusively emphasize the disadvantages of knowledge, as defined here, without considering those on the side of belief as well. As if people’s beliefs have not perhaps been the greatest source of destruction and justification for the infliction of suffering since the beginning of recorded history! Of course countless people have exhibited, do exhibit, and will continue to exhibit the most absurd and damaging behaviors on the basis of the particular belief structures to which they are committed. They lie, steal, murder, abuse, and destroy in the name of things in which they claim to believe. They offer pathetically amusing arguments to substantiate beliefs they do not understand, in the absence of accurate or carefully reasoned knowledge to give them credibility. Beliefs are undeniably the foundation for much of the misery in our world. However, beliefs are also the indisputable source of incredible acts of compassion, love, sacrificial care, and gracious support. People love, care, hope, save, and heal in the name of beliefs to which they are personally and meaningfully committed.

Perhaps, in the end, a personally meaningful commitment is the most essential characteristic that represents the critical value of belief over a “factual information”-oriented knowledge. The possession and dissemination of factual information doesn’t require a personal or meaningful commitment from an individual. One doesn’t have to personally care about the facts or information that one knows and communicates—one either knows or does not know them and they don’t have to matter or mean anything to the person who possesses them.

However, with belief, the situation is very different. A real, true belief demands a personally engaged commitment from the one who believes. To believe in something means that you care about it and it matters to you. Believing involves a personal investment that requires active participation from the believer, whereas a purely abstracted knowledge induces a merely cognitive passive receptivity in which the actual person of the knower is nowhere to be found.

That is why I increasingly value believing over knowing, and my deep reservoir of life-giving beliefs over my relatively shallow accumulation of intellectual knowledge. My beliefs may lead me astray, they may be delusional, they may be the cause of my undoing and unfortunately the undoing of others around me, but they may also be healthy and growth-producing, the source of my salvation and the salvation of others with whom I interact. They may lead to either heaven or hell, but at least they can and will lead me somewhere, offering both possibilities, while my intellectual knowledge of itself can give me nothing and leads me nowhere of any real substance or value. I am skeptical of what I know and trust (within reason) what I believe.