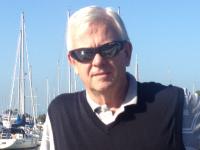 Chair Don Moss at the SCEH Meeting in Berkeley

On October 3, Dr. Donald Moss, the Chair of the School of Mind-Body Medicine, provided a workshop on breath training for attendees at the Society for Clinical and Experimental Hypnosis, in Berkeley, California.

Hypnosis and biofeedback practitioners regularly use paced breathing as a component in hypnosis induction and relaxation. Diaphragmatic and yogic breathing are familiar tools in meditative practice and in self-regulation training.  Traditional Chinese Medicine has observed:  “…the tranquillity of the mind regulates the breathing naturally and, in turn, regulated breathing brings on concentration of the mind naturally” (Xiangcai, 2000, p. 7).

Moss opened by guiding the attendees in a mindful breathing exercise, emphasizing mindful, effortless, and diaphragmatic breathing.  He also demonstrated for attendees an inexpensive downloadable breath pacer called the EZ-Air Plus, available at www.bfe.org, which can be programmed to guide individuals in breath training.

Moss reviewed the psychophysiology of respiration, highlighting the role of carbon dioxide and oxygen levels in the bloodstream, the role of hyperventilation and irregular breathing in producing physiological dysregulation, and a host of physical and emotional symptoms. Dysfunctional respiration contributes to asthma, anxiety (panic), functional cardiac symptoms, chronic pain, and other syndromes. The workshop introduced the Nijmegen questionnaire, developed in the Netherlands, as a tool to identify the likely presence of maladaptive breathing. The presenter also reviewed current research on the use of specific yogic breath practices.

Moss also demonstrated use of the Infiniti® biofeedback system to assess dysfunctional breathing, and as a tool for effective training of mindful, effortless, paced, diaphragmatic breathing.  The Infiniti and other similar multimodal biofeedback systems allow practitioners to identify the rate of breathing which  creates the greatest heart rate variability for an individual, enhancing resilience and general wellness. Even individuals with severely dysregulated breathing find it easier to transform their breath patterns, when they can view their current breath patterns on the computer screen. This is the essence of the biofeedback training paradigm.  Immediate feedback on a physiological awareness enhances bodily awareness, and enables voluntary control.  Moss demonstrated for attendees the use of several inexpensive portable breath and heart rate variability training devices, including the emWave II®, the StressEraser®, the RespeRate®, and the InnerBalance® from Heart Math (the latter works with the iPhone and iPad).

Moss recently edited a special issue of the Biofeedback  magazine (Fall 2013) featuring a series of articles on the use of breath training and heart rate variability biofeedback to address a wide variety of medical and emotional disorders.  He summarized findings from this special issue in his concluding lecture in the SCEH workshop.