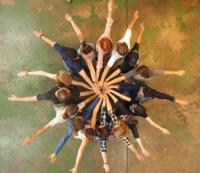 During a recent business trip, I asked a couple of my colleagues if teams had their own subjectivity distinguishable from the subjectivity of their members. I’d just finished reading an article by Fred Kofman in which the author made the case that teams and organizations are “artifacts” and not true “holons.” For now, let us consider that artifacts are things in the world created by sentient beings, whereas holons are beings in themselves, which inherently have an interior or subjectivity. I will further define holons later in this article.

Without much hesitation, both colleagues answered my question arguing that teams have their own subjectivity. One of them qualified his response with “the good teams do.” He explained that a loose connection of people, a “group,” may not have a developed subjectivity, but as people bond and form a “team” a unique subjectivity emerges which is the amalgamation of the values and beliefs of its members. This same person observed that teams can change their “personality” as new people are added and as “anchor” individuals depart. My other colleague at the dinner table was in full agreement and corroborated by observing that a team can regress and become a group again as its core values evaporate with changes in membership.

I appreciated the conversation and the insight from my colleagues as I wrestled with the notion that we create teams and as such they could fall under the definition of artifacts. Upon further reflection, I arrived at the conclusion that the conception of “teams-as-artifacts” is dangerous. When we apply an impersonal perspective to collectives, we are capable of making decisions as if they were “artifacts.” It then becomes easy to see a collection of people as a “thing” that needs changing. Layoffs, relocations, department eliminations, limitations of rights and privileges; all are actions that can fall within the spectrum of treating people as things. And why might we consider this OK? Because we believe we created the artifact and as such, we are entitled to change it.

In contrast, it is much more difficult for us, as human beings, to act against other individuals, particularly if we know them and have experienced their subjectivity. No one with a measure of humanistic awareness can rightly claim that another person is a thing, any more than we might claim that our favorite pet is a mere object. When we can see the interior of another, we can connect intersubjectively. On the other hand, once a group or team is formed, unless we are part of it, we can lose this intersubjective connection and as such the team can go from being a “you” or a “we” to being an “it.”

As we reflect upon the disturbing notion that teams can be treated as artifacts, let’s pause for a moment and consider our understanding of holons, which exposes an equally disturbing misconception.

Arthur Koestler introduced the term “holon” in his book The Ghost in the Machine. The word holon is derived from a combination of the Greek “holos” meaning whole and the suffix “on” suggesting a particle or a part, as in proton or neutron. In this definition, a holon is both a whole and a part and can be described in terms of its holistic and independent nature, as well as its dependent and interconnected components. Koestler envisioned that holons exist in a nested hierarchy which he called holarchy. A holarchy differs from the more common network hierarchy in that the holarchy is an encapsulating construct and not just relational as a network is. Holons exist within holons which in turn live inside larger holons.

Koestler’s work with holons was motivated by his desire to establish a bridge between the Newtonian, or mechanistic, worldview that places importance in the parts of a system, and a holistic view that downplays the parts in favor of the whole. He also recognized the importance of the evolutionary process in social systems. Koestler sought to define a framework to understand social systems which provides a balance between the micro-level of individuality and the macro-level of collectivity.

A simple example of a holon in the workplace would be comprised of an elemental task or job encapsulated by a work dyad, which in turn involves a team or work group encompassed within a larger a business unit, the latter being inside an organization which contributes to an industry, which ultimately belongs to a social system and the larger environment. In this example, there are a number of parts that live inside wholes, and these wholes exist within larger wholes, at increasing levels of scale until we get to the level of the whole we want to understand.

One question I did not ask my colleagues was whether collectives, such as teams, can be treated as individuals from the standpoint of attending to their needs and rights. There is ample evidence that we do this in many actual situations. The interpretation of the US Supreme Court in reference to the fourteenth amendment and its granting of legal personhood to corporations is a good example.  Another example is our society’s treatment of the issue of gay marriage. Defining marriage with reference to its subjective meaning for an entire constituency or social group treats the collective as a single individual. Even the best democracies in the world can impose limitations on their individual citizens based upon the common misconception that a collective has rights and can be treated as an indivisible unit of subjectivity.

So now we have introduced two potentially damaging misconceptions: a) we can treat a collective as an artifact, and b) we can treat a collective as an individual. I have been in organizations that could easily treat collectives as artifacts and make impersonal decisions as a matter of  convenience. I have seen private equity (PE) firms purchase distressed companies, and literally “slice them and dice them,” before selling them for a profit. To these PE firms, the collectives they are buying are pure financial artifacts.  Sadly, our laws and our modernistic worldviews support and reward the perspective that allows this to happen.

Our current political deadlock in Congress is a great example of the misconception that collectives can be treated as individuals. Several of the ideological disconnects between Republicans and Democrats stem from this common notion, when both of these parties generalize from single individual representations to assert positions affecting large and diverse populations. The “right to choose,” big government, small government, and Obamacare are all examples of combining multiple attributes found within collectives and prescribing simple individualized “solutions” for whole constituent groups as if they were individuals.

From a holonic perspective, both misconceptions presented here are aberrations exhibiting a complete misunderstanding of the concept of the holon as introduced by Koestler and expanded by Wilber. If we see all individuals and aggregations as holons, we naturally have to address both their individual and collective realities. We also have to consider their interior or subjective nature as much as their exterior or objective reality.

Imagine yourself as a decision maker armed with a deep understanding of holons. How you would act differently knowing the interrelationship and intersubjectivity that exists in a collective and its individual members? You still would need to make decisions but I believe those decisions would be different if made in a manner that avoided the aberrations described in this posting. Holons give us a valuable framework to deal with individual and collective realities alike, in a manner that intelligently considers the dynamic interplay of interiority and externality.