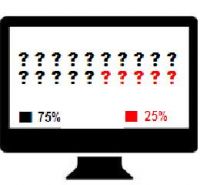 A new study out of Yale demonstrates that people frequently twist basic mathematically data to fit their pre-conceptions about issues they have strong feelings about (like gun control) … and that the more competent in mathematics the person is, the more likely they are to misunderstand the data in a way that fits their prejudice.

Get it?  The better quantitative skills you have, the more likely you are to twist quantitative data to fit your world view.

This phenomenon is not a surprise to those of us in the humanities, or those in the social sciences who are not green with STEM envy.  To us, it is a well established fact, with literally thousands of years of documented evidence told through myth and literature, biography, memoir, and case studies ,that brilliant men are capable of yoking even the hardest of evidence to the service of brilliant delusions.

An educated person who does not have the capacity to recognize the depths of his own prejudices and the fervency of his inner hopes is all too capable of re-ordering the world to serve his illusions.  Until the bitter end.  Sometimes even longer.

The risk of hubris of to the knowledgeable used to be a well accepted phenomenon.  Homer chronicled it, and in many ways Thomas Kuhn’s philosophy establishes it as a fait accompli in the progression of scientific knowledge.  Seeing only what we look for within a paradigm is a regular, even ordinary, occurrence.

We’re only surprised by this now because as we’ve moved into the era of “Big Data” we’ve invested considerable faith in “data” as a stand-alone phenomenon.  Even as we have documented the greater range of human epistemological diversity, we as  a culture have habitually come to assume that quantitative evidence not only can but does stand alone:  that no interpretive act is needed to discern the meaning of a data-set or the numbers provided by our calculating machines.

The fact that our best and brightest quantifiers … from Wall Street to politics to tech … keep falling on their faces over obstacles that are immediately apparent to non-experts does nothing to shake our faith that hard data inevitably points to truth, even though it’s clear that the people most able to manipulate that data are … well … manipulating it.  Sometimes deliberately, often not.   And the more educated they are in how to manipulate the data, the less aware they tend to be of misunderstanding it when it suits their preconceptions.

Education in STEM is not a panacea – it is part of the problem.

Which is not to say we should cut back STEM education – but is to point out that STEM alone is insufficient.  Quantitative data is never *just* quantitative data.  It always possesses a qualitative component.  Our increasing propensity to ignore this … to think that data alone is sufficient for a clear, “objective” interpretation … only makes it more likely that we are going to be led over a series of highly technical cliffs.

The answer … not offered by this study but made clear through millennia of humanistic knowledge … is the development of self-knowledge, and the capacity to keep and compare multiple qualitative interpretations in mind at once.

It turns out that engineers do need to study poetry, and mathematicians fiction, while code-warriors need to know their history.  Not just for the benefits of an understanding of the subject – though I’d argue this is vital – but also because of the habits of mind they engender.

Sadly, we’re moving in the opposite direction.  The humanities themselves, the largest bastion of the kind of qualitative reasoning that we most need to cultivate, are being pushed to go digital.

The “Digital Humanities,” advocated by those who believe that literature is better as binary code, are premised upon the notion that we don’t have to read books to understand them.  That we just need to pull the relevant “content” out and run it through a processor.  That spreadsheets of word use and subject matter are a more vital avenue for inquiry than the actual stories told.  That the quantified data is enough to understand even the most qualitative of subjects.  Don’t think about the book, just look at what the computer pumps out.

If you want to know “How could such smart people possibly think such stupid things?”, this is a good place to start.