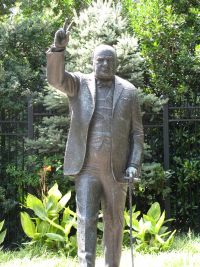 One of the dictates of our day is to “do your best.” We encourage children, students, athletes, and employees to do their best. We console ourselves after a loss that we “did our best.” While “doing your best” can often be honorable and true, there are many times that doing our best is not enough, and as Winston Churchill said, “we must do what is required.”

There are times when our best is not enough. There are times when we must screw our courage to the sticking point, dig our heels in, and do what is required. There is a story of a young woman, Lauren Kornacki, who found her father pinned under the BMW he was working on that had fallen off the jack. Lauren, in a feat of superhero strength, lifted the vehicle off her father. We have heard the story of the exhausted soldiers who somehow manage to defeat an enemy that is larger, stronger, and better equipped. We are familiar with those who refuse to surrender to defeat under any circumstance like the runner, Holland Reynolds, who managed to crawl over the finish line after collapsing in excruciating pain. In any of those cases, it would have been understandable if any of these individuals had succumbed to the harshness of their circumstances and waved the flag of surrender. Nobody would have judged or criticized Ms. Reynolds if she had given up at the end, after collapsing. Indeed, she would have been consoled because she did her best but the injury got the best of her—not completing the race would have been acceptable.

What these stories and the thousands of others like them tell me is that there are times when people can indeed get past their best and into what is required. There is something within each of us that we can tap into when necessary to surpass even our own expectations. Some might call it hysterical strength but I believe that what allowed Ms. Kornacki to pick up the car off her father was a fierce love. Ms. Reynolds, I imagine, knew that her team was depending on her and she refused to let them down.

My grandmother was a single mother of 10 children after my grandfather left. She raised her children on the little money she earned, and somehow, always managed to have enough to share with others who were in need. Even though it would have been understandable if she had given into despair and quit trying, she never did. She never made excuses and did what had to be done. I remember being a little girl and getting up with her before sunrise to go to her job as a hotel maid, carrying my Tupperware bowl of cereal as I sleepily sat in the car. My grandmother never crumbled under the weight of the burden she shouldered; somehow, she managed to keep going and be grateful along the way.

There are times when our best is simply not enough, and we must do what is required. Many of us have had experiences where we simply thought we could not go an inch further, but somehow, managed to do just that. It is to that deeper well of strength that I am calling to—the part of you that can create extraordinary greatness in ordinary times. Our political and social climate is such now that we need ordinary people to stand up and do extraordinary things to make a statement, have a voice, and make a difference. We need more voices joining together about human rights and social justice. At the end of your life, it will not be enough to say “I have done my best,” but rather, it is my hope that you will be able to say “I did what was required.”