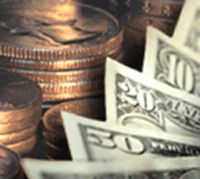 “Money is the root of all evil.” –The New Testament “Money… that’s what I want.” –The Beatles

Money makes our world go round. You might have thought it was gravity, or the strong force, or magnetism, or some other physical principle.

Money made the government shut down. Money ends some romantic and platonic relationships, and encourages others. Money is what the poor don’t have, but need, and what the rich have, and continue to amass.

It is that force of exchange that enables us to acquire goods and services. While physically, it is mere paper (or metal coins, almost worthless in themselves), we have imbued these objects with almost God-like powers—the power to lord my bigger pile of worthless paper and metal over your smaller, or perhaps nonexistent, pile. Whoever has the most wins.

Life is one big game of Monopoly.

And even Monopoly, the game, has lost some of its sense of irony. Despite a variety of false creation myths, the game was invented in 1903, according to Pilon (2013), by Lizzie Magie, a feminist in Washington, DC, who wanted to teach about the evils of monopolization. A new version of the game—one of the many variations to appear over the years since its creation—arrived this summer. What makes this one notable is that it substitutes the now iconic properties for corporations. Instead of Boardwalk, Park Place, Atlantic Avenue, and Marvin Gardens, we now have Coca-Cola, Nestlé, Samsung, and McDonalds. The object of this game is to acquire huge corporate empires rather than bankrupt opponents, using new tokens such as a Corvette Stingray and an X-Box controller.

How Magie must be turning over in her grave!

And the irony doesn’t stop there. Along with the development of this new variety of Monopoly this summer came the announcement of the not-so-surprising research findings that:

Just the thought of money makes us more unethical.

This research, coming out of a joint study between Harvard and the University of Utah, followed earlier work on how money subtly influenced decision-making processes. This new research examined the question in light of “morally relevant outcomes.”

Researchers exposed the participants in this study to money through images or phrases, which required unscrambling. Then the researchers asked them to engage in tasks where there were opportunities for “dishonesty or other underhanded dealing” (Murphy, 2013).

Kristin Smith-Crowe, a psychologist and associate professor at Utah, said participants “who had been ‘primed’ with the thought of money ‘were more likely to demonstrate unethical intentions, decisions, and behaviors than participants in a control condition’” (Murphy, 2013).

Murphy (2013) noted that the researchers were looking at “the influence that the mere presence of money or a symbolic representation of money may have on us without our awareness.” Murphy said that this type of influence might have been present in the decision-making process in an incident in the 1970s when a Ford recall coordinator twice voted not to recall the Pinto despite known dangers of gas tank ruptures and explosions even in low-impact collisions.

Research on why the rich seem to behave more unethically has not been limited to the above study. The University of California at Berkeley has also found these results in a series of studies (see, e.g. Piff, Keltner, et al., 2012). And in an op-ed for the Los Angeles Times, David Wolpe (2013) mentioned one report in Scientific American describing how the drivers of luxury cars cut others off at intersections at a much higher rate than those driving economy cars. Wolpe also described research at the University of Rotterdam where people primed with thoughts of money “preferred to play and work alone, put more physical distance between themselves and new acquaintances, and were less helpful when they saw someone in need of assistance.”

The question of relatedness is key. How many wealthy people regularly socialize with poor people? Or even interact with them voluntarily? Involuntarily? Daniel Goleman (2013) said that in this growing body of research about the attitudes of the rich and powerful—often the same people—those with the “most social power pay scant attention to those with little power.” Goleman said that this “tuning out” behavior has been observed even in five-minute get-acquainted sessions, where Goleman said the more powerful person shows less signs of being engaged in the interactions.

Goleman (2013) cited Kellner and Kraus’s research on social power and the attention deficit. Goleman explained that the researchers found that in general, we focus on what we value most. Therefore, those with few material assets place greater value on social assets, such as helpful neighbors, than the rich, who might simply hire someone for the same task. Thus, those with more social assets are better attuned to social relationships.

Furthermore, Goleman (2013) said this social distance makes it easier to focus on small differences between people, often blowing the negative characteristics out of proportion. To counter this, he said, Thomas F. Pettigrew, a researcher at the University of California, Santa Cruz, found that the more contact hostile groups have with one another where they got to know each other on a one-to-one basis, the more they discover that many of those “others” are “just like us.”

Compassion, empathy, human relationship. How odd that worthless pieces of paper and scraps of metal should be imbued with so much energy that not only do they buy more goods and services but also lessen the presence of these most valuable of human traits. Not for all, of course, but for many, as evidenced by the workings of our governments, our corporations, our ever-widening social gaps.

I wonder, too, is it isolating to be rich. An old movie—Over the Moon (1939)—featured Merle Oberon as poor woman who suddenly inherits a fortune. Her fiancé, played by Rex Harrison, leaves her, feeling that she no longer needs him as a “provider.” Oberon’s character is besieged by offers from men and women alike, dying to be her “friend,” when what they really want is to be close to her money. Soon, she meets a rich playboy, and they share their common experiences—how they must be suspicious of everyone they meet, since most, if not all, are after their money or power. If even a portion of that movie plotline is based in reality, how sad to live in such a state of fear and distrust of others simply over money.

It brings us back to what existential psychology discusses all the time—the importance of the real human relationship—the I-Thou meeting, where we treat one another as subjects, not objects, both equally worthy of respect and dignity. As in the Sanskrit word Namaste—I salute the Divine within you—within each of us.

And notice that that “Divine” has nothing to do with that paper or metal we call legal tender. Unless we choose to put it there—to direct our energy and its energy toward a purpose other than the simple exchange of currency for goods and services, both necessary and volitional. For if we worship money, we exchange I-Thou relationships for I-Its, make subjects into objects, and rob humanity of respect and dignity. Is that worth a couple of extra cents?

Part Two will focus on research about the psychological ramifications of poverty and scarcity.