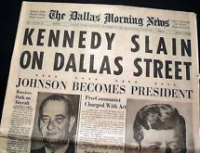 I was just 9½ years old that fateful day in November 1963. It was a typical November day for south Texas with the sun shining brightly and comfortable breezes blowing off the Gulf taking the edge off the warm temperatures. My class had just finished reading and was about to start science when the school principal walked into the classroom and moved briskly towards our teacher. For a few seconds the two men huddled in whispers until finally our teacher said, “Kids, Mr. Wehling has something to tell you.” Then came the news—President Kennedy had been killed in Dallas.

Third and fourth graders generally don’t know how to handle such news, and so we all just kind of looked around the room at one another. For what seemed like a very long time there was just quiet, and a sense of growing confusion. Finally, one brave student spoke up and asked simply, “What happened?” No one had noticed that the principal had left, and so our teacher began explaining the events that had just unfolded over the last hour and a half. Upon finishing his explanation, our teacher asked us how we felt or what we thought. The room was silent. No one seemed to have words to express feelings or thoughts about our President being dead.

At that moment, for me, time shifted into a dreamy slow motion that lasted for days. Over the next week, I didn’t see many people outside working on their lawns, or visiting with their neighbors. In the grocery store, people kept their eyes down, speaking only in quiet whispers when they spoke at all. The Sunday after the President’s assassination, our church was jam-packed with people, like it was Christmas or Easter or something. I don’t remember what my Dad preached about, but I remember people weeping and crying. The next Thursday was Thanksgiving, and once again the church was standing room only at both Thanksgiving morning services.

I don’t remember when things returned to “normal” or when life resumed its usual pace, but it happened eventually. I have experienced that dreamy slow motion state only a few times in my life since—when my Dad died, when my son died, when my Mom died, and on 9-11. Each time I felt out of control and disconnected from reality. I could hear people talking, but was unable to understand them. I could see things happening, but felt confused about what they meant. Nothing I did would make it stop, and when I thought I was asking for help, no one seemed to respond.

In each of these events, someone did finally emerge to help ground me and re-connect me with the world and reality. Just the act of sitting with me, listening to me go on and on about whatever, and hugging me when the tears came slowly brought me back from that eerie, “White Rabbit” state I was in. As I came out of my mind-bending stupor, I realized that I had been surrounded by a group of people who were offering me support, care, kindness, and compassion. Some of those present I expected to see and some I was surprised to see. It wouldn’t be until a later time that I began to identify those I did not see and had assumed would be there.

Community in crisis is a strange thing. These crisis communities are made up of people who would not normally speak to one another or who share very few, if any, common interests coming together for a short period of time to deal with an immediate and overwhelming threat. Sometimes this community will remain tightly bound for a few days, or weeks, or months, depending on the enormity of the crisis. But as the adrenalin diminishes, and the immediate needs are met, the community disseminates into the day-to-day humdrum of existence.

Much of our societal perception of community is shaped by these crisis communities. I live in Colorado Springs, and over the last two summers, our community has experienced two devastating wildfires destroying hundreds of homes, leaving thousands of people homeless and without worldly possessions. A plethora of individuals in the community take great pride in pointing out how “our community came together in a time of crisis to help their neighbors.” Mind you, this is not a bad thing, and good has come from these crisis communities. The problem is they don’t last. A year later, or even just six months later, these communities are gone, vanished if they never existed.

As Americans we take pride responding to crisis, and truth be told, we like to boast about it. But once the crisis is over, we go back to our daily lives, and in most cases lose interest in the crisis that had so exhilarated us. If you don’t think this is true ask people you come into contact if they know how the people in Joplin, MO are doing 18 months after the devastating tornado that hit their town. Ask them if they know what progress has been made in Haiti since the earthquake four years ago. Ask them if they have any idea how the families of the victims and first responders of the Newtown massacre are doing.

Too often, in America, we create communities with no roots, with a shallow purpose. Too often the communities we create have more to do with our individual need to feel significant or important. And when we have fulfilled our need for worthwhileness, we discard the community and move onto whatever new shiny thing has grasped our attention. Because our sense of connectedness has an attention span of a three-year-old in a toy store, ongoing crises in our communities and society go unsupported. Except at Thanksgiving and Christmas, the growing number of Americans going hungry goes unnoticed. Unless a military veteran shoots up a business or kills a family, the life conditions—living arrangements, physical or mental health—of veterans are ignored. Why? Because these issues demand too much attention, they require too much time, and they aren’t sexy enough for us to commit to.

This is not just true of the formation of communities; it is also true of relationships. How many times have you experienced befriending and supporting someone through a difficult time, only to have them drop the relationship when life returns to a new normal? I have experienced this more times than I can count, and I am sure you have had similar experiences.

Community and relationships take time, energy, and commitment. They require us to place something and someone else in a more important position than our own personal likes and desires. They require our attention in the dull and down times, as much as they do during the up and energized times. They demand of us to move out of our insulated, protective cocoons in order to make our world, our community, our neighborhood, or our friends feel secure in the present and brighter about the future.

And…it doesn’t take a fateful day in November to make that happen.