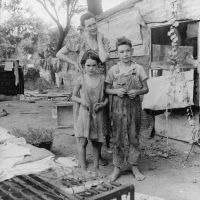 In Part One, I focused on what too much money seems to do one’s Being-in-the World—how it shifts both one’s ability to interact with others as well as make decisions. But clearly, not having enough money to satisfy one’s basic needs—such as food, housing, and transportation—is also going to have an impact. This idea is not new—what is, however, is the growing body of research in light of the simultaneously growing impoverished population in the United States, as well as around the world.

Sendhil Mullainathan, a Harvard economist, and Eldar Shafir, a Princeton psychologist, have been studying people who have had to make do with less in what at first seems like very different situations—those who are impoverished and those who are dieting. In the former, the condition may have been “thrust upon” the person, while in the latter, the person may have “chosen” to go on a diet or “forced” by medical circumstance. Despite the superficial differences, the two conditions share many common links—most notably, having to learn how to deal daily with budgeting severely limited resources, calories or money, necessary for continued existence. And as these researchers have found, both can reduce mental capacity and decision-making skills.

The constant preoccupation with calorie counting, the researchers said, distracts the brain from other tasks. Just the stress created by the appearance of a plate of cookies in a meeting can direct attention away from the topic while the brain is calculating the pros and cons of eating one of those cookies.

The same is true with money. When one has only $10 to last for the day, or the week, the purchase of a beverage can be equally as stressful as trying to analyze the cost-benefit ratio of the cookie above. Can I afford the drink? Am I thirsty enough now? Will I need the money for something later? Mullainathan (2013) said these tasks are about “bandwidth”—how much space do we have in our brain to process logical and spatial reasoning, solve problems, learn and absorb information, and even control ourselves, if our brains are “clogged” with these thoughts about whether to eat a cookie or buy a drink? Mullainathan discussed another study highlighting the differences between dieters and non-dieters confronted with eating a chocolate bar. The non-dieters ate the chocolate bar and moved on, while the dieters spent time trying to figure out how to make up for the calories or even try to understand why they ate the chocolate bar at all.

Writing about Mullainathan and Shafir’s (2013) book Scarcity, Tina Rosenberg (2013) said that the authors have found the “bad decisions of the poor … are not a product of bad character or low native intelligence. They are a product of poverty itself.” She explained that the researchers found that even middle and upper class people, when placed into situations of scarcity, behave like poor people.

Rosenberg detailed a study from the book where the authors approached shoppers in New Jersey shopping mall. They asked participants about their income level, classifying them, without their knowledge, as rich or poor. They then presented participants with the following situation: Your car needs $150 in repairs. You can take a loan, pay in full, or postpone service. How do you go about making this decision? The participants then took various intelligence and cognitive tests. On these, poor and rich did equally well. But when the situation was changed to $1500 in repairs, the poor group’s scores dropped significantly—more than if they had been sleep-deprived.

Kathleen Vohs, a University of Minnesota psychologist who commented on this research, said the ramifications of the study are tremendous. “Simply put,” she said, “being poor taps out one’s mental reserves. … These findings suggest that decisions requiring many trade-offs, which are common in poverty, render subsequent decisions prone to favoring impulsive, intuitive, and often regrettable options” (Vohs in Vergano, 2013).

Taking this one step further, an article in The Atlantic cites an additional study where the researchers looked at the long-term effects of poverty on brain function. The study followed children in impoverished families, starting at age nine, until the participants reached their early 20s. According to the research, many of the poor children showed difficulties in emotional regulation as adults, including brain changes indicated through fMRI scans. The researchers attributed many of these changes to the chronic stressors in the children’s living environment including exposure to violence, family turmoil, crowded living conditions, and/or low-quality housing.

In existential therapy, we often refer to the importance of taking responsibility for one’s choices. But when working with people with financial difficulties—clearly a growing sector of the population—Mullainathan and Shafir’s research is a very important factor to consider. How much can a person take in or take on when just getting the kids fed and to school, and getting to work takes up most of a client’s available “bandwidth”? When a client speaks of being overwhelmed by his or her day-to-day existence, how well do we, as therapists, really hear it and get it?

It is so important to learn to empathize with those dealing with limited resources. For those blessed enough to have never felt times of financial hardship, perhaps the idea of dietary restrictions makes it easier to comprehend those times when every decision in life becomes a trade-off—where every decision about a single calorie or dollar or cent feels as though life and death hangs in the balance. And for some, it is not just a feeling—it is their daily reality.

References
Badger, E. (2013, October 28). The lasting impacts of poverty on the brain. The Atlantic Cities. [Online Edition]. Retrieved from http://www.theatlanticcities.com/jobs-and-economy/2013/10/lasting-impact…

Mullainathan, S. (2013, September 22). The mental strain of making do with less. The New York Times [Online Edition]. Retrieved from http://www.nytimes.com/2013/09/22/business/the-mental-strain-of-making-d…