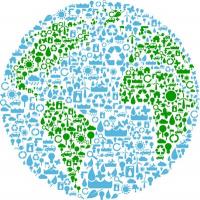 On a snowy, bitterly cold Minneapolis afternoon, when my then-preschooler finally fell asleep after hours of stalling and my dog shook off large clusters of ice onto the kitchen floor following his backyard romp, it took some self-control and compassion to not snap at my mother. My compassion came from a place within that reminded me, “We don’t know what we don’t know.”

I had just finished cleaning up the kitchen mess and was putting forth great effort to lug the bright green recycling bin from the breezeway to the driveway’s unplowed, icy bottom. After  a few near-slips, I made it back up to the breezeway and into the house, where I faced my mother’s gaze—a mixture of scowl and frown. And then she spoke, “What are you trying to do, save the world?” Startled—and probably low on sleep—I replied, “No. I mean, yes. I’m just trying to do my part. Does it bother you?” She didn’t answer, but that afternoon plays back as a life recording as if it were yesterday.

Clearly, I wanted to do something for the environment—but was it really enough? In the many years that followed, my interest in sustainable life assumed many, diverse forms. I became more actively aware, sought out more information, and listened to others who were infinitely savvier than me about such matters.

Yet, even as I grew increasingly interested in—and committed to—a more sustainable way of life, I still felt a bit separate from its foundation—as if sustainability and I were part of some exotic, yet intimate, new duality.

I didn’t know enough to feel knowledgeable, but I did enough to feel somewhat involved, which gave me peace and also served to ameliorate some semblance of guilt. Yet, my behaviors were only moderately integrated into my self—my identity, my soul. Undeniably, not dissimilar to my mother, I, too, didn’t know what I didn’t know. This telltale phrase became a mantra that both unconsciously and consciously kept me static, removed from knowing “too much,” and thus insulated from the not-so-pleasant realities driving and demanding the sustainability movement itself.

Ensconced in a bit of an insulated-but-well-meaning bubble of pseudo-savvy and privately embarrassed lack of knowledge (and thus connection), sustainability was something I yearned to be a part of—yet, I was intimidated by its elusiveness.

What I now am learning as a student of sustainability, is that sustainability resides organically within each and every one of us—in our sheer will to survive and thrive—and meld ourselves into something greater. Yet, I humbly am overwhelmed at the enormity of its complexity, breadth of systemic interconnectedness, and seemingly endless paths of exploring both problems and solutions.

I am, even at a point where I know as much as I’ve ever known about sustainability, shockingly aware that like my mother that cold afternoon, I still truly don’t know what I don’t know. Reading on and on, even as I passionately—almost greedily—absorb the words, I continue to arrive, face-to-face, with my humility.

This time, however, I’m emerging from the dualistic, compartmentalized zone of “receiving” knowledge about this “subject matter.” This time, I am ready to know what I don’t know. I want to learn how and why our world’s problems came to fruition—and how the world and its people can empower ourselves to see the urgency, value, and potential in our active participation. I want to play a role in closing the gap between sustainability as notion and practice.

On that snowy afternoon in Minneapolis, I organically “knew” to be a thoughtful, committed citizen. It never occurred to me NOT to lug out the recycling bin. It was inconvenient, but not all acts of goodness, decency, stewardship, or respect are buoyed by convenience; in fact, many of the most powerful and positive interventions can be rather messy.  What I did not know, however, was that I didn’t need to doubt my relevance in the sustainability “puzzle.”

What I didn’t realize then is what I am happily, humbly, gratefully learning today: Sustainability is an interactive, dynamic, and synchronistic way of doing and being in the world, with its solutions often times residing within the presenting problems, themselves. Most important—and all too often unrealized or unappreciated—the people, organizations, technologies, and communities actually have a tremendously rich, albeit urgent, opportunity to become parts of the whole—and in doing so, both literally and figuratively change our world.

The issues are undeniable: poverty; over-population, pollution and toxic health hazards; corporations still building for profit and not necessarily for ethical responsibility; and industrialization and commercialization of biological, natural systems, amongst others. Today’s problems are worse and more complex than ever before, especially considering that old systems of dysfunction continue pervasively to play out upon the global landscape and societal stages.

Yet, all this complexity does not excuse inaction where human behavior is involved.  Encouraging sustainability is a great deal like parenting—eliminating the reward system that reinforces undermining, negative behaviors—and instead, replacing it with one that encourages, inspires, and eventually upholds and honors, that which is truly positive.

In his recent article Three Challenges to Sustainability, Arty Mangan of the Bioneers asks us to consider what might change in the world if, for example, farmers were availed “incentives for conservation, permaculture and organic farming [so that] we can stop supporting the most damaging activities and encourage practices that create economic ‘conditions conducive to life’ ?” It takes all of us, not just government policy-makers, to effect real systemic change.

If we sit idly by, observing with inaction—or worse yet, observing with judgmental inaction—we are grossly negligent and irresponsible in our delusional and avoidant “hopes.” When considering that time is of the essence, we no longer can take excessive time to contemplate or debate an obvious sustainability crisis. If no action is taken, all will never be well; all won’t “be” anything, at all.  Nature certainly could use a positive boost about now—in a way that upholds and honors her essence. In other words, we need to educate and activate—before it’s too late.

Fortunately, where there are crises reside possibilities for solutions, resolutions, and even healing. Where there exists pain, there can emerge opportunities. Along with the new and emerging technologies—the ones that inspire and support the oftentimes very negative impact upon people and environment—comes some real inspiration for believing in the possibility of implementing real, sustainable, healthy, global changes.

There are electric, plug-in, and hybrid automobiles, bikes, and public transportation, as well as solar energy, and a strong push for less toxicity and pollution impacting our air and foods. Yet, can it take hold and place rapidly enough to make a long-term, truly sustainable impact?

What it really boils down to is a question of how we as a planet value our own humanity and that of the world around us.  Are we human beings, as opposed to human “doings?” Also, do we perceive and experience each other as our own precious investments—without which we, and nothing else, can survive—let alone, thrive? Ironically, it is at our supposedly strongest time in life when it behooves us to consider our sustainable “mortality,” as well as its future.

In terms of responding to the various—oftentimes, severe—challenges to sustainability, many opportunities for positive change and redirection reside in the educational, spiritual, communications, and personal-professional “business” of sustainability science and practice. Within the school, soul, language, and business aspects of sustainability, itself, there rests real hope and inspiration. Within these aspects, it is entirely possible for sustainability to survive, if not thrive; in doing so, it embodies its own definition and essence.

Assuming a holistic, integrative, and multi-disciplinary approach, higher education institutions must consider themselves not narrowly within a vacuum or isolated as an island, but rather, as an integral part of a larger-scale, interdependent system. Now, the provision of education is perceived more as a “moral obligation,” as opposed to what once was perhaps governmentally funded as an assumed or even maybe less important or vital need.

For private investors, funding higher education is an opportunity to play a role within sustainability. In a compelling way, higher education also can serve as a metaphorical mirror to its society. Is it a mouthpiece of the government, a neutral observer, or a collaborative societal or community partner?

As it is flexible and issue centric, so is sustainability a matter of spirituality and soul.  Sustainability as science and practice, as well as intricate, complex mindset and consciousness, is an arena of great breadth and depth. Thus, how we as human beings create and enact our roles in the world, can either negatively impair or positively impact our internal world and the external world all around us.

Sustainability requires humanity to recognize that short-term, so-called “fixes” are not the answer—and that the way in which change is embarked upon is of critical importance; it represents the first steps of setting the world’s stage for future acts.

Conservation biologist Georgescu-Roegen poses the question, “What is the intellect, grace, dignity, sensitivity, and compassion with which we as people operate with such opportunities?” In essence, “the dialogue about sustainability is about a change in the human trajectory that will require us to rethink old assumptions and engage the large questions of the human condition that some presume to have been answered once and for all.”

Sustainability clearly is both a movement and lifestyle—based upon possessing the courage—moral, psychological, and spiritual—to step up to the proverbial “plate” to assume a role of active engagement, participation, and leadership.  Sustainability change agents and leaders must recognize its divergent problematic “personality” profile—one that requires, if not demands, “a higher level of spiritual awareness.”

We can continue to find and implement ways to combat pollution, create healthy and productive products, services, and technology, and overall, install and enforce policies to solidify and protect the initiatives, endeavors, and advances that we intend to prevent us from backsliding, experiencing destructive regression. When it comes to sustainability “crunch time,” it’s always the top of the hour.

There no longer is room for rigidity or power struggles, no longer time for avoidance; if we wait too long, our time as people and planet no longer may be viable.  We need not transform ourselves into salespeople with a pitch. Instead, why not be educators and innovators in action?

For those less enthusiastic or evolved in their commitment to a sustainable future, why not contemplate the benefits of becoming a planetary steward? Think about what matters most to you, and consider what life would be like if that were removed or never existed, at all.

We all know those corporations and people who make the biggest marks on the earth, those who express themselves the loudest. This is their opportunity to shine, by beginning to see themselves as part of the solution, simultaneously experiencing as the world does, as part of the problems.

With each new day comes new awareness. With each new moment of awareness, it will become increasingly more difficult—perhaps even excruciatingly so—to look the other way or minimize what is taking place both with and without our permission or knowledge. Pretty soon, it is my hope that we will know what we didn’t know, as well as what we have yet to learn and absorb.

Sooner yet, it is my sincere hope that amidst the overwhelm that is our world today, we will know ourselves and this home we share, with the familiarity, respect, and love that we—and it—deserve.

Today, nothing remains immune to sustainability challenges—and many, many things can benefit from sustainable support and promotion. While some situations are dire, requiring a rather herculean effort, there are many that whisper instead for a gentle nudge that will move each of us, as citizens of an interdependent world, toward realizing our inherent greatness.  The best part of all?  I know what I now know: Anyone can be a hero.

Read other posts by Mari Tankenoff