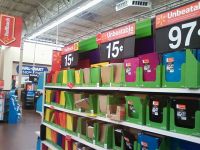 I quit one of my jobs today. I’ve been trying to get out of the for-profit college that first employed me out of graduate school but, until recently, could not afford to. Remember that we all make choices from the range of options available rather than from a range of idealized possibilities. Just as people work at Wal-Mart or McDonalds largely because all the other options are worse, so I worked for a for-profit school because the alternative was complete unemployment.

Things are better now, but far from perfect. I considered keeping this job but events this term have really made it plain to me that I could no longer continue this work in good conscience. I won’t be the first to criticize education for profit nor, hopefully the last. Before getting started on that, though, let me explain some of the upsides.

First, this education company really tried hard to include everyone. This is something less traditional schools don’t do so well. (In one job interview, I asked the interviewers of a small Midwestern college how they were working to improve diversity among their staff and students, and they noted this was not a goal for them. At a more major school, the various interviewers noted their population were largely affluent, privileged, and White, and that was just the nature of the work.) Most of my students were neither privileged nor White.

They also worked to break up the troubling trend for people to go to college only if their parents went to college. Again, we were attacking privilege every day. Most of my students were the first people in their families to pursue a higher education. Here, we were getting it right. Many of my students studied at night alongside their children, teaching their kids to value education by valuing it.

A big problem developed a few years ago when the recruiters were paid a great deal of money and given few guidelines. Student recruitment took some very shady turns for a year or two, with people in homeless shelters, for example, being urged to sign up for benefits and loans they could not repay to go to a school they could not graduate.

That settled down and things were fine for a while, with serious students capable of the work. That all fell apart recently, and here is where the criticism begins.

First, the cost of this parity was always too high. Students graduating the school I worked for paid roughly four times the cost of a public university or community college. Initially, they were getting a pretty solid educational—not top of the line, but good enough. Then came a series of capricious changes to the curriculum, with a new syllabus almost every term. The work was gradually dumbed down. Rather than turn in four APA style papers, for example, now my students would turn in one at the end of the term and spend the rest of their time playing games and doing crossword puzzles. The school moved to prevent further tuition increases when faculty complained but the capricious changes remained.

From the inside, this seemed to me a move to improve their pass rates rather than to take education very seriously. Other information might tend to support this assertion.

Next, consider the pay and working conditions for faculty versus CEOs. Faculty pay does tend to correlate with the quality of education that students receive. The school I worked for uses almost entirely adjunct faculty except for supervisory roles and pays them a very low rate compared to the work expected. I spent 20-25 hours a week on just two courses, the maximum they generally allowed. I earned an average of just under $9 an hour for this contract work. At this wage, I needed to work elsewhere to get most of my needs met, sometimes resulting in needing to take shortcuts to get all the work done for this school.

Meanwhile, the CEO made millions of dollars in salary, and several times his salary in stock options. I won’t say which person he is on this list, but he wasn’t at the top. Consider also what public and private, not-for-profit educators make. The president of Harvard earns $800,000. The median income for a public president is a bit over $350,000, and a bit over $600,000 for large private universities.

These conditions mirror those at other U.S. mercenary enterprises such as McDonalds (average worker pay is under $8 an hour with hours limited to part-time status, managers make under $40,000 a year and work unlimited hours, CEO pay is over $12million) or Wal-Mart (worker pay is around $8-$10/hour with full-time positions limited, while the CEO brings in $35 million a year, and the heirs to the Wal-Mart fortune are together worth as much as 40 percent of the entire U.S. population).

This really creates a picture of education companies structured to serve the interests of shareholders rather than of students and the society in which those students must live and work. Education is growing ever more like Wal-Mart. Even the public sector has to grow ever more top heavy to compete. Government funding is drying up at the state level, making it necessary to get most of the full cost of education from students. Now I believe in the University of Phoenix motto: an educated world is a better world. But taxpayers are no longer willing to foot the bill to live in a better world; we vote year after year for politicians who make the budget leaner by making students pay the full cost. At the same time, executive pay rises to try to compete with private colleges, and administrative costs skyrocket as we hire private-sector presidents with private-sector philosophies. As a result, more faculty than ever before are adjuncts with poverty pay, no benefits, and no job security. Tenure is almost a thing of the past.

I was eventually able to find slightly better work. I am still adjunct for the two schools I work for now, but they treat me well enough that I was able to quit my job for the Wal-Mart of higher education.

What you can do:
Know that there are better options. Many school offer online course these days, community college is almost universally affordable and accessible, and nearly everywhere will try to make your entry process as easy as a for-profit place.

Remind others of those options. If they are paying more than their GI Bill checks in tuition, help them look at their options.

Quit when you can. Many of us work unsavory jobs because we have to. That doesn’t mean we owe allegiance to the economic system that pushes us to these choices between evils.

Support workers in other industries, like fast food and retail, who labor under the same pressures.