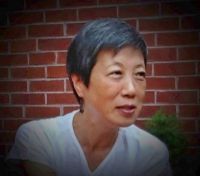 I often referred to Maiko as my “Japanese sister.” When people gave me a quizzical look, I would explain that Mariko became a member of our family after my sister, Hope, spent four months as an exchange student and lived with the Sasaki family in Japan in 1968. (Sasaki was Mariko’s maiden name.) Mariko wrote in her journal that upon first meeting Hope on a train in Japan, she was so impressed with Hope’s self-confidence, she decided to come to the United States. Perhaps she thought if she came to the U.S., she could get some of the confidence she saw in Hope for herself.

I am sure Mariko experienced many confidence-building opportunities. Upon arriving in the U.S. at age 19, Hope picked Mariko up in a car and they headed off for a concert in New York State—the concert that turned out to be the concert of all concerts—Woodstock. One can only imagine what impact that had on a young woman from Japan who was arriving in the U.S. for the first time!

I did not see Mariko often when she first arrived in the United States. I had married, started a family, and was living many states away. Years passed, and Mariko made a life for herself in the United States. When I divorced and eventually moved from Chicago back to the East Coast, I had an opportunity to see her more often. Because my sister, Jeff, Mariko, and I were single, we spent holidays with Mom and Dad and went on vacations together. We laughed a lot during those vacations.

One particular memory I have is of Mariko trying to negotiate climbing from a rowboat to a ladder in a bay in the Bahamas. My sister, who was paddling the rowboat, was afraid that the boat would capsize because of the pressure Mariko was putting on the boat to reach the ladder. Mariko remained suspended between the ladder and the rowboat for several seconds while the rest of our family, safe aboard the sailboat we were in, watched in horror. Mariko fell into the water, wearing a down vest that dragged her down even more once it was wet. Mariko took her spill into the bay with good humor, and it became a “Remember when …” moment.

There are many things I loved about Mariko—her courage, sense of humor, caring sensitivity, determination, and generosity. She often brought us gifts—many I still have. I remember one time she went to great lengths to find a large paper lantern my father could make into a light to fit inside a hay fork suspended from the living room ceiling in the barn my parents converted into a home. Mariko carried the huge lantern back from one of her trips to Japan. Never mind that the lantern was very large, and my father joked privately that the hay fork looked like the legs of a giant praying mantis grabbing an egg—my parents put it up, very mindful of the effort Mariko had taken to bring it to them.

Family members celebrate transitions with one another, and Mariko marked many of those occasions with us. Mariko attended my second marriage and my sister’s wedding. We celebrated Mariko’s wedding to Aki Sendai, a Japanese man who owned businesses in New Jersey. Mariko’s father, Mr. Sasaki, who considered my father to be Mariko’s “American father,” wrote to my father asking if he thought he should give permission for his daughter to marry Aki. My father carefully wrote a response to Mr. Sasaki and asked me to read it. He said over the years, he had come to know Mariko well and knew she was a sensible and a determined young woman. If she felt Aki was the man she wanted to marry, then my father believed it was a good decision and that permission should be granted. I thought it was a beautiful letter and was touched by the love these two men, from different cultures, had for the daughter they shared. We had a party to celebrate Mariko and Aki’s wedding and laughed when about 30 Japanese guests, all with flash cameras, took pictures of the cake cutting celebration—it looked like a press conference!

Having a person from another country join your family is special any time it occurs. Looking back, having a Japanese sister was remarkable when I consider the historical context. My father was captain of a destroyer in the Pacific during World War II. I was a war baby. Even though I was only about four months old when WWII ended, it was part of my history. Despite the fact that the U.S. and Japan had been at war, I do not remember anyone in my family saying anything negative about Japanese people. I remember a conversation we had at a family dinner concerning what our countries had done to one another. I thought at the time how remarkable it was to be having such a discussion with a Japanese family member. It was clear family relationships transcended decisions our respective governments had made in the past.

It is rare when we have an opportunity to get to know someone from a different land and culture. When an individual joins your family, it provides an extended period of time to get to know someone. While there were periods when I did not see Mariko as often, we stayed connected as one usually does with family. Mariko acquired self-confidence in the United States and accomplished a great deal. She completed degrees, started and ran a language school, oversaw another business, and developed a close circle of friends here.

Knowing Mariko was a gift on many levels. First, she was a very special person. Second, knowing her contributed to my interest in different cultures. Third, and perhaps most important, she contributed to my belief that if we could only get to know others from different countries on a personal basis, we could create a “world family.” If we had more “friends and family” experiences, understanding might increase; conflicts that result when power and governments clash, might decrease.

I feel blessed to have known Mariko. I am thankful she had the courage to come to the United States. I thank her family for supporting her adventure and our family for expanding our vision of family. Mariko was a part of our family. We will miss her.