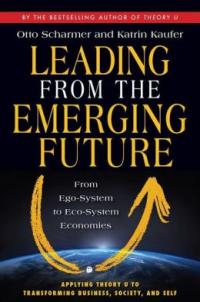 For anyone interested in 21st century organizational effectiveness, sustainability, integral leadership, conscious evolution and/or societal transformation who has not yet delved into Otto Scharmer’s concept of “presencing” — the practice of “sensing” future possibilities and acting from the presence of what wants to emerge – I invite you to prepare for a most satisfying journey via the recent publication of Leading from the Emerging Future: From Ego-System to Eco-System Economies (Scharmer & Kaufer, 2013).

A senior lecturer at MIT and co-founder of the Presencing Institute and the Global Wellbeing and Gross National Happiness Lab, Dr. Scharmer in 2009 captured the interest of organizational leaders and sustainability professionals with his “Theory U,” a guiding image of the successful change process based upon a simple but elegant proposition. In Scharmer’s words: “the quality of results produced by any system depends on the quality of awareness from which people in the system operate.”

The “U” image portrays the “shape” of a journey that is both linear (in the sense of having directionality) and evolutionary (in the sense of transcending habitual patterns of thought and action). The movements of the “U” are three-fold: 1) downloading: opening awareness to the edges of the ego-self, a process of opening minds, hearts and wills to the places of most potential relative to the situation at hand; 2) presencing: a pause for retreat and reflection that allows the inner knowing of “what wants to emerge in the here and now;” and 3) performing: enacting and embodying the future via small, spontaneous actions that quickly generates stakeholder feedback and allows you to evolve and iterate future possibilities in the here and now.

The newest work by Scharmer and Kaufer (2013) builds on the Theory U framework to provide a “roadmap for the evolutionary path of key institutions and societal systems.” The authors posit that as a global community, we have “entered an age of disruption in which individuals, institutions, and societies face new types of challenges that require them to let go of habitual ways of responding.”

By inviting readers to look at the above entire set of disconnects as a whole system, the authors invite us to see and understand deeper structures within the current “reality iceberg.” We are invited into a level of awareness that illuminates the first of several “blind spots” in the current economic and managerial paradigm: By continuing to respond to challenges with top down strategies, we inevitably produce results nobody wants.

Following the U journey to a deeper awareness of systemic interconnection, we encounter a second “blind spot”: The consciousness that has governed the “economic monotheism” of the twentieth century.

Today’s real economy is a set of highly interdependent eco-systems, but the consciousness of the players within them is fragmented into a set of ego-systems. Instead of encompassing the whole, the awareness of the players in the larger system is bounded by its smaller subparts. The gap between eco-system reality and ego-system consciousness may well be the most important leadership challenge today – in business, in government and in civil society (p. 68).

An evolutionary response to this challenge at the level of human consciousness requires a paradigm shift in the underlying architecture of economic thought, transforming the “existing logic and operating system” of the traditional “ego-centric” coordination mechanisms of the global economy to the emerging next stage of a stakeholder-centric, and “eco-centric” economic future. This profound transformation can be accomplished in the here and now through a co-creative alignment between the “exterior challenges that can no longer be ignored” and the “internal resonance with an awakening human consciousness and will.”

[In the] critical clash of economic ideas, one dogma-based system is fighting another one: Left versus Right; twentieth century thought versus eighteenth- and nineteenth-century thought … We need to articulate a different view of economic, political, and spiritual affairs – a view that is not primarily Left or Right, that is not wrapped around the primacy of this mechanism or that one, that doesn’t believe that the solution to our problems lies with Big Government, Big Corporations, Big Money, or Big Ideology (p. 71-72).

By working to strengthen our “collective attention” to the emerging realities of our century, today’s change leaders can source innovation from the field of future possibility. In each of the areas of structural disconnect described above, opportunities exist to invent and prototype institutional innovations that will power and sustain the emerging eco-system economy on a global scale. For example, by rethinking the role of capital and money in the twenty-first century to serve the “real economy” rather than the “speculative sphere of fictitious value creation,”

the flows of money and capital would be redirected from the US $190 trillion bubble of profit-seeking capital into those sectors of society that today are underfunded – basically, the whole regenerative side of the economy: innovation, education, health, sustainability, and the environmental, social, and cultural commons (p. 98).

But is such a bold agenda for change realistic given the deeply embedded global power structures that maintain the institutional status quo? Authors Scharmer and Kaufer invite us to consider that over the past several decades our global society has witnessed “a subtle shift in the balance of power between individuals and institutions in favor of individuals.”  In fact, the world has enormous potential in terms of “inspired, intentional, and collective entrepreneurship.”

So what practical steps can we take that will move us along this journey of global transformation? By becoming more methodical about “tapping this dormant force” of individual and collective human potential at the creative edges of our emerging global community, we can bring about global movements for good. This means addressing the third major blind spot, a veil that has kept us from seeing that all thought and action, whether individual or collective, has its source in human awareness. By “crossing a threshold of self-reflective meta-awareness on multiple levels” we can begin to “coordinate our coordinating (systems of awareness-based collective action, or ABC).”

In sum, Scharmer and Kaufer have marked the multiple pathways of an evolutionary leap for mainstream institutions and civil society alike. They accomplish this by focusing like a laser on the major structural disconnects and blind spots limiting our collective ability to realize an emerging future waiting to happen.

As a call for meta-awareness within human consciousness, this impactful work cannot easily be dismissed as a utopian vision of a world “out there” and out of reach, any more than the urgency of its prescription for change can be dismissed as dystopian hyperbole. The authors’ meticulous presentation of hard facts describing the tectonic fault lines of our current economic reality ensure that Leading from the Emerging Future will occupy a prominent place within that contemporary genre of literature that calls for a rejection of ideological abstraction and a conscious turn to “the real” as a productive field of inquiry.

Leading from the Emerging Future translates the much-lauded Theory U into an accessible, practical guide for a global citizenry. As a roadmap for the much needed presencing journey within the real world context of ecological, social and spiritual “divides,” that frame today’s most consequential global challenges, this compelling read stands as proof that integral consciousness is ready for a prime time slot in the emerging 21st century political economy.