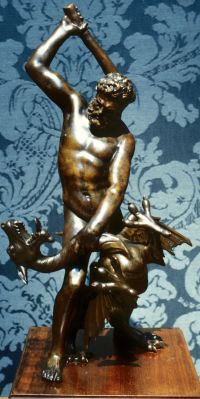 Giambologna’s Hercules and the Dragon Ladon.

In Joseph Campbell’s The Hero with a Thousand Faces (1949), he posits the existence of a Monomyth, a word he borrows from James Joyce referring to a pattern that is the essence of and universally common to, heroic tales in every culture. He outlines the archetypal episodes that subdivide three stages of the hero’s journey (separation, initiation, and return) using myths and fairytales from ethnic and religious iconographic sources such as Arabian Nights, Ancient Greece and Egypt, Arapaho and Navaho Indian, Buddhist, Old and New Testaments, South Indian, Celtic European, African, and Australian to translate life-crises and life-deeds into impersonal forms. The hero is depicted as a warrior—champion of things becoming; the lover, emperor, world redeemer, and saint are symbols of the divine creative and redemptive power hidden within us that is waiting to be known and rendered into life.

The stages of the hero’s journey are: (1) Birth (conception, birth, childhood), which established the hero’s pedigree, (2) Call to Adventure (through an external event or messenger), which he/she accepts willingly or reluctantly, (3) Helper/Amulet (protective figure portrayed as a wizard, old man, dwarf, or fairy godmother), (4) Crossing the Threshold (trial or ordeal he/she undergoes from the familiar to the unknown), (5) Tests (dream-like adventures with monsters, sorcerers, warriors, or forces of nature), (6) Helpers (encounters with a supernatural companion), (7) Climax/Final Battle (critical moment of resolution with a monster or wizard), (8) Flight (hero’s return to the threshold of adventure in preparation to return to the everyday world), (9) Return (crossing the threshold via awakening, rebirth, or resurrection), (10) Elixir (object, knowledge or a blessing the hero acquires), with a restorative or healing function that defines the hero’s role in society, and (11) Home (return from adventure with the power to help society).

In the second part of the book, Campbell then turns from the microcosm of the individual to the macrocosm of the universe, and the role played by the hero in the cosmogonic cycle (growth, dissolution, redemption), which depicts the symbolic journey from childhood to selfhood and actualization.

Of the stages Campbell describes in the passage through selfhood, he points to the hero’s meeting with the goddess, symbolic of a mystical marriage of the hero/soul with the Queen Goddess of the World. This is often depicted as a crisis at the nadir, the zenith, the uttermost edge of the earth, the central point of the cosmos, or the tabernacle of the temple, symbolic of the deepest chamber of the heart. The goddess represents the paragon of all paragons of beauty, the reply to all desire, the bliss bestowing goal of every hero’s earthy and unearthly quest. She is mother, sister, mistress, and bride; the incarnation of the promise of perfection; and the soul’s assurance that, at the conclusion of its exile in a world, the bliss that once was known will be known again: the comforting, nourishing, good mother—young and beautiful. Although time sealed her away, she dwells still, like one who sleeps in timelessness at the bottom of the sea.

Campbell’s universal mother imputes to the cosmos the feminine attributes of the first, nourishing, and protecting presence. She is the life of everything that lives and the death of everything that dies—the cycle of birth, adolescence, maturity, senescence, and death. She unites the good and the bad, the two modes of remembering mother: cosmic power, the totality of the universe, and the harmonization of all pairs of opposites combining the terror of absolute destruction with an impersonal yet motherly reassurance. As the goddess Kali, she also represents change: the river of time, the fluidity of life, and the power to create, preserve, and destroy. In Campbell’s writings, woman represents one who knows; the hero, one who comes to know. Woman is guide to the sublime acme of sensuous adventure. The meeting with the goddess is the final test of the hero to win the boon of love, fulfillment, and self-actualization.

The preliminary meditations of the aspirant-hero serve to detach the mind from sentiment, and bring the hero to the core of a more profound reality. In leaving the stage of Narcissus gazing into the pool and Buddha sitting in contemplation of greater truths, Campbell unveils, the aim is not to see, but to realize that self and of the world are not separate, but one universal essence. Written 65 years ago, Campbell’s Myth of the Hero provides insight about our essence. Not a place, a time, an insight or a state of mind, myths are conscious and unconscious archetypal narratives that are energy-releasing, life-motivating, and directing agents common to all cultures across time. They provide a logical model capable of overcoming contradictions in our worldview and experience, embody our deepest yearnings, and reorient our spirits to the still point of eternity, as they ground and illuminate our journey on the path to self-realization.