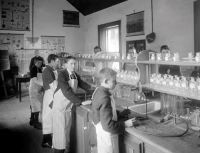 National Library of Ireland on The Commons.

Science: the place where we abandon our perspective and values, seeing problems from no point of view, studying problems as they come along with no special motivation other than pure knowledge.

M.A.S.H.‘s Col. Potter had a word for this sort of thing: horsepuckey.

Here’s the thing: we’re humans. We are embodied humans, genetically and biologically disposed to be embodied in this bipedal form, with two eyes facing front, experiencing the world in sound and light and colors through symbols and language.

Can we manage pure objectivity? Doubtful. Just try to imagine observing a phenomenon as a pure abstraction, absent any point of view—or even from every point of view at once. Can you do it? I thought not.

Even if we could, why choose to study one problem over another? Because this problem is of interest or is urgent, and that problem is not of interest or not urgent. These phenomena matter to us, seem linked in some way, and those ones don’t.

This probably all seems pretty much freshman philosophy, but it matters. It matters because we read our scientific journals as though the authors and reviewers were capable of a kind of objectivity that we are not. Worse, sometimes the tasty or provocative findings make their way into the popular media, stripped of their science, boiled down to some headline.

One of the most famous examples is Andrew Wakefield’s (1998) investigations into purported links between autism and vaccination. Public health still battles the fallout from this study that was never replicated and later found to be fraudulent. Wakefield had some significant undisclosed biases, specifically financial ones. Once these were uncovered, all support for his study in scientific studies vanished—but the public still believes in a link between vaccines and autism.

This study implicated the MMR vaccine. Since then, any substance that might have possibly been implicated has been removed from the formulations. Still, there is an anti-vaccination movement spurred by the first fraudulent findings that has expanded to all vaccines, regardless of formulation.

What would have been different if the first paragraph of Wakefield’s study had been a full disclosure of all his financial conflicts of interest?

Beyond Wakefield, we all live every day with the consequences of undue credit for objectivity. Psychotropic medications make obscene amounts of profits for drug companies. Why should we assume that articles touting their efficacy would be written from an objective viewpoint? Now we know many such articles are ghostwritten by the companies themselves, borrowing the names of respected MDs without disclosure. And we know Harvard School of Medicine is an alleged hotbed of corruption, with research directors beholden to big pharma. Pure research? Horsepuckey.

What is needed is full disclosure in every published article, starting with why the author is researching this particular topic, ending with all of their potential conflicts of interest. And every article needs to end with a disclaimer reminding the scientifically illiterate about the limits of human objectivity. Study the numbers, the methodology, and also the interest. Be skeptical.

We would do well to bring the educated scientific attitude, the awareness of subjectivity, into the public sphere, too. We all remember the various cable news debacles around the last election as proponents for one side or the other relied on partisan pollsters. Nate Silver, however, got really famous for nailing it. Non-partisan study was effective where biased studiers using what they thought were objective methods got it wrong. Heavily, absurdly, repeatedly wrong.

Above all, when people with obvious interests at stake make statements, we need to be doubly critical of them. When the statements are political or financial and seem to support our thinking, we must be triply critical. Politicians do not get a pass for objectivity; always we need to wonder what their interest is. People selling things we need to question more closely and look not just for confirmatory data but disconfirmatory data. The best way to prove something, to reach for our own objectivity, is to attempt to disprove it—a fundamental value of science.

But we expect (or should expect) manipulation from these sources. We are most vulnerable when this manipulation happens from the sources we should be able to trust: the scientists and the peer-reviewed journals that publish them.

What you can do:

Maintain a healthy skepticism without veering off into cynicism. Always look for the angle. Who benefits? Who profits?