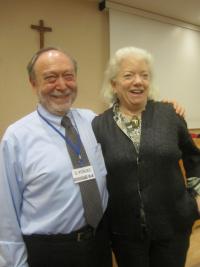 Stephen Porges is a leader in the scientific study of psychophysiology, especially of “heart rate variability” and the role of the vagal nervous system. His model is based in his innovative understanding of the evolution of the mammalian nervous system. Porges has also contributed to the practical applications of psychophysiology to treatment, including the treatment of children with Autistic Spectrum Disorder.

Dr. Porges is Professor of Psychiatry at the University of North Carolina. He is Professor Emeritus of Psychiatry at the University of Illinois at Chicago, where he directed the Brain-Body Center and Professor Emeritus at the University of Maryland where he served as Chair of the Department of Human Development and Director of the Institute for Child Study. He served as President of the Society for Psychophysiological Research and the Federation of Behavioral, Psychological, and Cognitive Sciences. Dr. Porges is a former recipient of a National Institute of Mental Health Research Scientist Development Award. He has published more than 200 peer‐reviewed scientific papers across several disciplines, including anesthesiology, critical care medicine, exercise physiology, gerontology, neurology, obstetrics, pediatrics, psychiatry, psychology, space medicine, and substance abuse.

In 1994 Dr. Porges proposed the “Polyvagal Theory,” a theory that links the evolution of the mammalian autonomic nervous system to social behavior and emphasizes the importance of physiological state in the expression of psychiatric disorders.  One of his most memorable papers appeared in 1998, “Love: An Emergent Property of the Mammalian Nervous System.”  Porges is the author of The Polyvagal Theory: Neurophysiological Foundations of Emotions, Attachment, Communication, and Self-regulation (Norton, 2011) and is currently writing Clinical Applications of the Polyvagal Theory: The Transformative Power of Feeling Safe (Norton, 2014).

In his address in Venice, Dr. Porges emphasized that mammals have evolved with needs for engagement and attachment, very different from the reptiles from which mammals evolved.  One  thinks of the turtle, a highly developed reptile, which lays its eggs in the sand, and abandons the young to their own survival.  Every mammalian species, in contrast, gives birth to its young, and then commences an extended period of nursing, protecting, and “raising” its young.

Porges emphasized that the regulation of our physiology is embedded in our social relationships. This need for engagement is actualized in face-to-face social engagement in which our eyes and ears monitor the safety or threat in each encounter.  Eye contact and prosody — flexible and variable tonality — mediate and announce safe and nurturing conditions. Attachment or engagement is a primary need for adults.  Yet trauma and stress disrupt engagement. Estranged human being stare into space, and break face-to-face contact.  Over-reliance on electronic communication, which is ironically labeled as “social networking,” lacks some of the key elements, such as eye contact and prosody required for physiological and emotional engagement.

Neuroception is a term utilized by Dr. Porges to describe the monitoring of threats in social encounters.  Faulty neuroception leads to shifts in physiology into a threat-protective mode, which blocks engagement.

The “love code” calls for social engagement plus social bonding.  First, we need to establish safety, then proximity, and then contact, supporting bonds.  Many disturbed populations with post-traumatic stress, autism, and others with disrupted engagement patterns, need assistance to navigate this sequence to recover capacity for attachment.  Immobilization is a primitive reptilian defense strategy.  Both “fight or flight” and immobilization are physiologically-based responses to threat.

Dr. Porges related his discussion of social bonding to his model of the autonomic nervous system, and his proposal for a “Polyvagal Model.”  There is a paradox in understanding vagal nerve mediated responses.  Porges proposes that the vagus nerve system is a complex structure, with an older vagal system based in reptilian physiology, and a newer vagal system based in the uniquely mammalian physiology.  Premature neonates, for example, suffer parasympathetically mediated immobilization often leading to death.  These neonates lack the mammalian vagal system developmentally.

This is the basis for what Porges calls the “polyvagal theory,” emphasizing the divergent function and role of the twin vagal systems. The polyvagal theory uses evolution to provide an organizing principle to understand the divergent defensive strategies of human and other mammalian organisms. The old vagus causes apnea, bradycardia, and vaso-vagal syncope.  The sympathetic system develops and causes mobilization and defense.  The new vagal system comes on board and mediates affiliation, face-to-face communication, and engagement.

Dr. Porges ended his keynote with the words of a popular song:  “The look of love is in your eyes.  The look your heart can’t disguise.  The look of love is saying so much more, than just words can ever say.” It is that face-to-face encounter, the look of love, which facilitates adaptive social engagement, heals trauma, and adds richness to our lives.