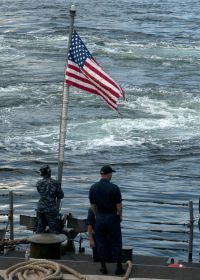 We can all identify a few times, a few events in our lives, that have changed us. That have awakened us, startled our awareness, opened us to a view of things that was previously impossible.

One of these times for me was a lecture—I can’t even remember the context or subject—about the idea of “love it or leave it.” The idea under contention was that if someone disrespected the flag, we had the right to ask them politely to get the Hell out of our country.

The lecturer, whose identity I seriously and sincerely wish I could recall, opposed this position. He explained how it was possible to love your country and still reject some symbols of that country, and how your love for your country might inspire disappointment in it, disobedience towards some of its symbols. He cited the example of a Vietnam veteran burning the flag. Nationalists might grow offended, concerned, outraged; patriots might understand how his love of his country has lead to disillusionment, the need to protest, agitation against government corruption. These are all acts of love rather than hate. And even dislike for one’s country cannot be construed as grounds to expel someone or contemn them: a country that cannot withstand some criticism might not be a country worth living in.

This talk would later prime me to receive certain existential messages. For example, the simple positive regard of early Carl Rogers’ philosophy and practice is just that: simple. Too simple. He was criticized somewhat for being too easy with people. I immediately preferred an existential approach to love, which acknowledges that love is complicated because people are complicated. Our clients have dark sides. They might self-actualize towards evil or away from functionality, choose to withdraw rather than grow into an accepting world.

These words are especially vivid for me this morning, as though I were sitting in the room listening to the person speak. I can practically recall the words verbatim. This morning on the local news is an artificial controversy about a soldier who posted pictures of herself online. The pictures are of her relaxing in her car, captioned to indicate she is avoiding the morning flag salute.

The internet reaction is predictably both racist (the poster is an African American woman) and nationalist. I won’t share any of the disgusting reactions thrown her way due to the risk of possibly dignifying them. But I do have news for you.

Most people who enlist in the Army, Air Force, or Navy do not do so for nationalistic or even patriotic reasons. They do so to escape poverty. And recruiting tools and strategies cater exactly to the impoverished young, offering steady pay, travel, transferable work experience, and help with college costs. This is not to say people are unresponsive to the public need to see their soldiers, airmen, and sailors as patriots, or to the conditioning in basic training to indoctrinate patriotic and nationalistic thinking. But if nationalism or patriotism were the primary motivators for entry into the services at the enlisted level, then there would be a lot fewer “support our troops” bumper stickers and a lot more military personnel. In other words, all the money would not be necessary.

Before the gentle reader thinks I am deriding a particular group of people as ignorant, remember that even Heidegger succumbed to nationalism. This parent of existential thought espoused Hitler’s ideologies. Sometimes we are moved to write works that propose so high a standard that we cannot live up to it when the time comes to be tested. Other famous existentialists write about a treatment so beautiful few can resist it, but practice with much more medication than makes existentialists comfortable.

I clearly remember timing my arrival on post to be generally much before reveille to avoid standing still outside in either freezing cold or blistering heat. And when I went to work, so long as I was permitted, I gave everything I had to completing the mission. I loved and love my country, but have no particular attachment to the symbols of that country, and do not love blindly. I am aware of racism, classism, poverty, religionism, the banality of politics, the erosion of our civil liberties, and a million other daily injustices. I avoided the flag salute for possibly the same reasons as the now-embattled soldier in our local news: avoiding pain and discomfort that I perceived to be unnecessary.

But others avoid it every day. Some choose to sit through the pledge of allegiance in school. Some sit through the national anthem at ball games. When these people are people of color, public criticism is especially intense—as though people of color do not have special reasons to not be terribly impressed by the regalia of patriotism. As though they didn’t live in a country that daily forgets or actively disparages their contributions, coerces their military service by offering few other realistic ways out of poverty.

With all of this in mind, the next time I am expected to rise for the national anthem and stand with my hand over my heart, I will, in full and regrettable knowledge of my White privilege, decline to do so. Because I love my country, but I cannot live with the fact that my country makes war and then sends our poor people—disproportionately our people of color—to kill and die there. Because I love my country, feel incredibly lucky to be part of the American experiment, but cannot condone the fact that so many Americans cannot tell the difference between nationalism and patriotism. Because sometimes patriotism means calling out the evils your country perpetrates through the war on drugs, through drone strikes, through domestic surveillance, gerrymandering, a million other slights every day.

And this poor soldier who probably just didn’t want to stand out in the cold for five minutes is going to be the center of a huge maelstrom she never asked for and doesn’t deserve.

What you can do:
Criticize, hear, and accept criticism; judge slowly.