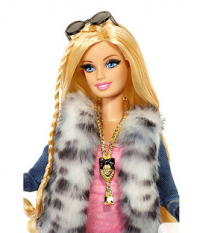 The limitations of our existence are, of course, our human birth and death, but sometimes we pay less attention to the Dasein of childhood than we do to that of adulthood. If your young daughters are anything like I was at the age of five or six, then perhaps you already have more Barbie Dolls in your house than you know what to do with. However, the Pacific Standard reports about a new study that says that girls who play with Barbie—even if she is dressed as a physician—pick a more limited set of career options than those who played with Mrs. Potato Head. The girls played with the dolls and were then shown pictures of possible career options. The researchers asked the girls if they could envision themselves in those careers and then if they could envision boys in those careers. The girls who played with Barbie picked less fewer careers often associated with men—e.g., pilots, police officers, and doctors—than those girls who played with Mrs. Potato Head. Hmmm… did my own Barbie activity prevent me from realizing heretofore-unknown dreams of being a pilot? With my fear of heights, probably not.

And in the continuing battles about children who are told they have Attention Deficit and Hyperactivity Disorder (ADHD) as an excuse to (over)medicate them, The New York Times suggests that the expansion of Pre-K programs could lead to an even greater overdiagnosis of ADHD, particularly among lower income children. The authors recommend that as this early education movement grows, so should the movement to increase the care doctors take in making these diagnoses.

Just because a child has reached his or her teenage years does not mean that the growing has stopped. Iowa Public Radio reports teenaged-brain about a new book by Dr. Daniel Siegel entitled Brainstorm, describing the tumultuous emotional upheavals going on in a teenager’s developing brain from the ages of 14 until 24. He describes the brain’s evolutionary need for being part of a group at that age—a need that feels life-threatening. Thus, he explains that a parent who says no to a teen who wants to go out with his or her friends to a particular event can trigger an overwhelmingly negative response based on this evolutionary brain’s need.

If we know anything about the Being-in-the-World of teenagers, it is that they are attached to their phones. So perhaps one of the best technical innovations in crisis therapy to come along in quite a while are crisis text hotlines. The New York Times reports about several new crisis text services that allow users to get help even when they are surrounded by friends in a crowd and still look like they are just texting other friends. While still in its infancy, these services have exchanged more than one million texts with teenagers and have started working to link themselves with more established crisis centers as well as with 911. The texts also give teenagers a written record of a the conversation—something for them to read again later on when the crisis has passed. Even medical doctors have found that texting their teenage patients has been a better way for them to help manage their long-term care.

Lest one accuse me of leaving out the other end of the lifecycle, I will close this with thoughts about the aging process by one of my favorite baseball writers of all times and favorite writers in general. Roger Angell writes in The New Yorker about “Life in the Nineties,” meaning his own, and it is full of tears and joy and wisdom and humor, fully capturing the essence of existential finitude.