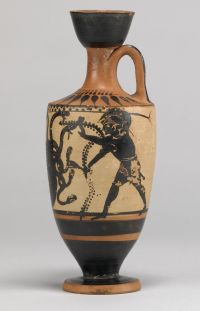 The word myth has various definitions and meanings. Henry Murray’s (1960) Myth and Mythmaking began with a definition that I particularly like from the work of Mark Schorer in “The Necessity of Myth” from his writings on William Blake:

Myths are the instruments by which we continually struggle to make our experience intelligible to ourselves…. [They are] a large, controlling image that gives philosophical meaning to the facts of ordinary life; that is, which has organizing value for experience (Murray, p. 355).

Without such images, experience is chaotic, fragmentary, and merely phenomenal. While it is the chaos of experience that creates them, all real convictions, Murray believed, involve some mythology. What did he mean by this?

Murray (1960) also offers a more formal, descriptive definition: “myth manifestly consists of the essential feature of an important, natural/preternatural [transcendental] situation or event (that has a basic thema) in which at least one extraordinary psychic entity is involved” (p. 319). He implies that mythic narratives are susceptible to interpretation and involve psychic projection. For example, an intrapsychic myth, he argues, is projected into the environment through subjective experience: states of being or becoming, mutations of emotion and evaluation, interior conflicts and resolutions, liberation from modes of feeling and thought, reconciliation, spiritual rebirth, states of grace and redemption, and transformations of the psyche, self, or personality.

Besides animistic nature myths, there are those which refer to the states, actions, aspirations, and fortunes of a particular cult or whole society (collective myths); those which refer more particularly to the birth, experiences, endeavors, death, and after-death of an extraordinary human being or demi-god—hero, king, savior (individual myths); those myths, social or individual, in which the prime actor is a transcendental preternatural being without embodiment in nature (theistic myths), and, finally, those which are chiefly concerned with internal, or endopsychic occurrences or states (intrapsychic individual myths). (p. 332)

According to Murray’s understanding, myths have a temporal reference in the sense that they are the essential feature of imagined situations or events. They also have a functional definition whose power may be estimated in terms of social scope, temporal span, and average intensity of effect. A constant feature of individual and collective myths was the educational, drawing forth, or eductive quality they possessed (see Murray, 1943).

Murray further describes myth as a primitive, imagined event represented in words spoken by an appointed agent (shaman, priest, or medicine man) during a ceremonial event in which a “mythic imagent (imaginal event: dream, fantasy, vision, trance, apperception, recollection), mythic narrative (event described in words), and mythic rite (event enacted physically) were interdependent” (1960, p. 341). In a causal sense, then, myth, as the product of imagination, was originated and sustained by basic needs and feelings (dynamic psychic determinants) in the form of a narrative in response to critical situations that were experienced, consciously or unconsciously by the society, its members, and/or the individual.

Building on the work of Murray and others, Eliade (1991) explains how myth takes a person out of individual, chronological, historical time (the profane) and projects him or her, symbolically, into a paradoxical instant (the sacred), which cannot be measured because it does not consist of duration. Likewise, Jung (1971) describes myth as the embodiment of nondiscursive symbols, or archetypes that manifested as projected symbols representing bound psychic energy that could only gain release through their actualization. The realization of opposites hidden in the unconscious signified a reunion with the unconscious laws of being and the attainment of conscious life. The union of opposites was neither a rational thing nor a matter of will; it was a psychic process of development that expressed itself in symbols.

One unanswered question among many remains: does myth have a biological basis? Jung believed that “instinct and archaic modes meet in the biological conception of the pattern of behavior, where consciousness itself is a transformer” (1971, pp. 110-111). Feinstein, Krippner, and Granger (1988) argue that “personal myths are internalized, organizing models that shape perception, understanding, and behavior, and in this sense are rooted in an individual’s biochemistry” (p. 182). Likewise, Sansonese (1994) describes myth as an esoteric description of a heightened proprioception rooted in the nervous system:

Myths were composed because they were descriptions of the primitive, mythmaking, proprioceptive consciousness from which the species has evolved and to which, by means of your nervous system, you yourself are still very much linked…. Myths make use of the special knowledge of our bodies’ life processes to tell us about ourselves, about who we are and whence we have come. (p. 36)

Does the unconscious contain an innate repertoire of psychological adaptations or archetypes, activated by environmental variables that guide us through stages of the lifecycle, and are these built into the central nervous system by evolution, I wonder?