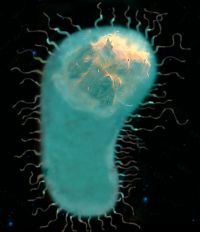 David Brooks, a columnist for The New York Times, may be the only major conservative media figure today covering the “evolutionary psychology” beat—along with the “neuropsychology” beat, and the occasional writings of biophysicists and theorists of mind.

His writing of the past few years has sought to expose the way “human nature” is indeed animal—if not to say “chemical” and “mechanical.”

But in a March 14 column, Brooks drew a line in the sand, suggesting that such an approach can only go so far—and no farther. He writes:

It leaves the impression that we are just slightly higher animals—thousands of years of evolutionary processes capped by a thin layer of rationality. It lops off entire regions of human possibility.

In fact, while we are animals, we have much higher opportunities. While we start with and are influenced by evolutionary forces, people also have the chance to make themselves deep in a way not explicable in strictly evolutionary terms.”

This should be a self-evident truth: that while we are indeed bundles of meat and chemicals, that we have the capacity (and perhaps even the spirit) to be more. Instead, it is a trumpet call that existential-humanistic psychology alone has been consistently making in a culture increasingly smitten with the idea that people can be reduced to component parts.

“Reduced” is the proper word here, and it’s perhaps the most disturbing part of the trend. Most of the materialist discourse about human nature is specifically designed (deliberately or not) to eliminate the possibility of higher aspirations.

A fine example can be found again in The New York Times, where on March 13, Ferris Jabr, Associate Editor of Scientific American, wrote an essay called “Why Nothing Is Truly Alive.”

The piece follows a revelation Jabr had: that “life” is a mental construct and not a scientifically measurable threshold. He explains:

Not only is defining life futile, but it is also unnecessary to understanding how living things work. All observable matter is, at its most fundamental level, an arrangement of atoms and their constituent particles. These associations range in complexity from something as simple as, say, a single molecule of water to something as astonishingly intricate as an ant colony. All the proposed features of life—metabolism, reproduction, evolution—are in fact processes that appear at many different regions of this great spectrum of matter. There is no precise threshold.

Some things we regard as inanimate are capable of some of the processes we want to make exclusive to life. And some things we say are alive get along just fine without some of those processes. Yet we have insisted that all matter naturally segregates into two categories—life and nonlife—and have searched in vain for the dividing line.

Whether or not this is true is up for debate—reasonable people can disagree—but note the emphasis: you’re not really alive. That negative framing is a wholly unnecessary choice: the exact same evidence, and same logic, could produce the headline “Why everything is alive” just as well.

This is a common trope of the materialist argument: it is used to tear down the notion that human beings are anything special, that we have dignity to live up to and good fortune to live up to. Instead of describing us as “mere” molecules and atoms, chemicals and neural pathways, we could be described with equal force and vigor as the most extraordinary matter patterns in the universe—unique and special assemblages of start stuff capable of levels of consciousness that no other forms in all reality (that we know of) can match. Patterns of self-sustaining systems so advanced that we’re able to dream—literally and figuratively.

The materialist paradigm for life absolutely supports that interpretation—but few proponents go there. They prefer to use an approach of negation. Reducing us down to the level of animals, machines, algorithms—none of which suggests that as humans we have the capacity to be better than we are, to strive meaningfully for more.

This is a dangerous trend. Whether or not there is a spirit within us, the research conclusively shows that human beings are happiest when we act as though we have a soul to cherish. We are at our best when we are struggling to achieve the “depth” that Brooks has belatedly come to talk about, but that Carl Rogers and Rollo May and Abraham Maslow and, hey, Aristotle, elucidated as a key part of what it means to have a healthy inner life.

A materialist philosophy that cannot talk about human dignity, that has nothing to say about human depth, is a social plague. It encourages us to be nothing but our lowest common denominator, when what makes life worth living is struggling to exceed our capacities and be more than the sum of our parts.

I welcome Brooks to the team, and hope he continues in this vein. We need his voice. For all that the press is enamored of neuro-this and pharma-that, the evidence is—and long has been—on the side of existential-humanistic approaches to life.

Benjamin Wachs is the author of “A Guide to Bars and Nightlife in the Sacred City,” and archives his work at www.TheWachsGallery.com.