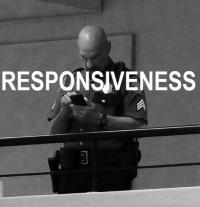 In this country, citizens across a broad spectrum of diverse backgrounds don’t often come together over a cause. We just don’t organize much anymore. Our rights and liberties were bought and fought for some time ago. Or so we think –

We expect our water and electricity to just work. We expect to easily cross neighborhood boundaries for markets, brunches, or parks without incident. We hope our voting mechanisms work, and when they don’t, we are outraged – and tell everyone on Facebook things should be different.

Generally speaking, most citizens have very little insight to what government actually does. And government probably feels that citizens are entitled, complacent, and whiney. Both perspectives are accurate.

This didn’t just happen, it’s been in the works for a very long time. The systems in which we operate (society, neighborhoods and government) are not really designed for openness and responsiveness. They are designed to run as efficiently as possible for the most people possible. When was the last time your water didn’t work, or your electricity? When is the last time you really went without, in terms of basic government provisions? Though we usually fail to notice it, government programs and policies improve our daily lives in innumerable ways.

The problem is, the people in government are stuck in processes that close them off to the daily lives of its citizens. Government is designed for top-down messages, most of which people struggle to make relevant to their lives (if they consider what government has to say at all). The system is breaking down and everyone knows it. The failure here is lack of real leadership.

Nowhere is this more apparent than in neighborhood meetings, where government tries to put its best foot forward and in the first sentence, pretty much loses its audience. After about 14 years of living in the Central District and Pioneer Square, Seattle, I’ve seen first-hand the inequality of neighborhood safety/protection and general funding priorities. Nowhere has this been more apparent than the latest incident in Pioneer Square.

In response to neighborhood unrest, the Mayor had two events: Stand For Compassion, and a Neighborhood Summit. Both could not have been more disappointing. The introduction of this article pretty much sums it up.

Seattle’s soul might be said to reside in its neighborhoods, but often immersion in neighborhood politics feels more a ride in the back of a Metro bus.…

Still, the recent Neighborhood Summit was important. Seattle’s disaffected hinterlands — almost any place outside of downtown — carry a lot of anger and distrust about city government’s intentions and responsiveness. The neighborhoods were asked to plan for growth; most did, then saw their plans shelved, overrun by events, or ignored. Some neighborhoods have had to absorb more than their fair share of growth, others have seen affordable housing shunted aside for high-priced high-rises, most have seen potholes proliferate.

“It’s harder to make eye contact here than it is in New York. You need to come check out #uptown #parks we have a great grant writer.”

Aside from the out-of-touch presentations of the meeting, there were a number of lost opportunities at this event. Two stand out:

A first miss was a lack of actively attentive, and interested police presence. It may sound like I’m being hard on the police department…and to some degree I am. While the Mayor doesn’t staff the neighborhood, the police that are here aren’t stepping in on bad behavior. Our neighborhood has numerous examples of de-policing and slow response from 911:

A second miss was a lack of city council presence at the event, as well as neighborhood organizations. The tables were “claimed” by neighborhood residents, whom politely asked that other neighborhoods not sit at their table. There was also not enough seating for everyone. The wrong kind of seating, audience style, did not facilitate conversation. And not enough table seating created territories.

Too often, we invite people to participate in ways that are trivial or just plain useless. People don’t want to be talked-at. Society today is about two-way communication. So few large institutions really understand what this means. They need to take a page from Gavin Newsom. “In a world where people can do anything at the touch of a button—shop, communicate, do research, publish a blog, transfer money—government cannot keep functioning in a twentieth-century mind-set.” It is about openness over control. As a rule, ask important questions, the answers to which should benefit the organization, or your own life. If the question being asked of more than 10 people provides boring responses, you’re asking the wrong question.

What would have come of having easels throughout the room with questions such as:

A blank page can be a scary thing, but give people a list to start from, and suddenly everyone is an executive – leverage that. Scaffolding provides a framework for participation. It works best when the framework matches the task at hand. If you want people to write a letter, give them one to start from and let them modify it. If you want people to vote on top issues, put ten of the top issues around the room and let them vote with stickers on which ones need to be focused on for that conversation. Have City Council members host a round-robin conversation with groups of 8-10 people on that particular issue…share feedback and outcomes. When tools fit the experience, it’s simultaneously immersive and focuses people on the task at hand. The experience adds valuable content to the process government is trying to guide.

Don’t “shush” them. Not everyone came for four hours of listening to data from a year ago. They came to collaborate on something common to all of them. And, not everyone wants to actively participate. The majority would often prefer to stand back and watch. If you are inviting participation that is highly involved, make sure to build in secondary ways to participate. This might mean voting on favorite entries, commenting, or snapping pictures. The more public the participatory experience, the more likely people are to move from spectating to participating. When you can watch other people do it first, it builds confidence and trust that this is a worthwhile activity.

On April 5, the room was filled with willing minds and hands. So much energy and enthusiasm just lost as presentations droned on with dated information. The neighborhood summits could have been and still could be a great local hub event with hackathons dedicated to solving community problems. Here is an example.

Read other posts by Christine Haskell