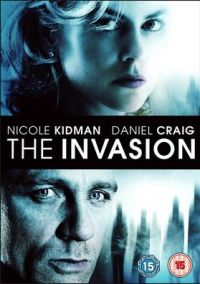 The movie was called The Invasion, with Nicole Kidman and Daniel Craig. Maybe you watched it and thought it was mediocre at best. I did too, sometime in the last couple of years. But today, I was paying attention (perhaps because I didn’t want to) and heard all the subtext.

I think the best science fiction uses the science elements to set the scene for a human drama not possible or believable otherwise. Another Earth is a great example of this: the alternate-universe background is just that, a backdrop against which the story is told. We get to examine questions from different angles.

The Invasion is about an organism that changes people. It is presented as insidious and disgusting: it is transmitted, for example, by those already transformed vomiting into the beverages of those not yet infected—or, in a particularly disturbing scene, directly into their mouths. Infected people endure a brief hibernation when they next sleep. They become covered in a sticky chrysalis, a second skin. When they emerge, they are transformed.

They are a strange mix of peacefulness and aggression. They express little emotion or pleasure in one another’s company; they do not laugh or rage. But they kill remorselessly (dogs attack them and suffer the penalty; those immune to the infection are quietly disposed of), and those amenable to the infection are held down and infected against their will.

The first half of the film is the presentation of these new people, these others, as insidious and frightening. The protagonist, a psychiatrist, experiences one of them as the husband of one of her clients. He is a strange, dislocated man who arrives at her office to take his wife home, clearly a threat to her safety. Her son is with her ex-husband, obviously infected, and she wants to rescue him from this situation.

But some events later in the movie cloud the view here.

First, the alien hosts respect the protagonist’s privacy. She is on a train, in the bathroom, and a young boy calls her out: just sleep and join us. She replies she will do so, she just wants to do it in private. He acquiesces. She paints herself with glue so she has the appearance of the newly converted and holds down her emotions, passing among the aliens.

Next, she tells the young boy—who appears Asian—that she just wants to get back to her family. He says, “We are all family now.” Later in the film, a series of news clips describe an increasingly peaceful world. Israel and Palestine reach a peace agreement. Venezuela and the US open their markets. And so on.

And, as the infected come to outnumber the uninfected, life goes on exactly as normal.

People eat, work, love one another. Once the old humans are eliminated in a given area, peace grows and blossoms.

Another suggestive subtext is how the infection works on its victims. It requires a hormone secreted during REM sleep. In other words, it happens while you are dreaming. And when you stop dreaming mid-sequence, you die. Once infected, your only chance to not evolve is to not go to sleep—specifically, to not dream.

The film leads us to wonder: why does the old model of humans resist the progress of the new models? Is their project to create a vaccine or a treatment morally well-founded? What would you give up in order to defeat racism and war?

The protagonist makes some suggestive remarks. First, she prescribes her patient an antipsychotic because the patient doesn’t trust her husband. Later, she laments this decision. This closely mirrors our own world, where psychiatrists’ first line of attack is to medicate problems. Could we grow out of this? She suggests we can. Also, at a dinner with some philosophers, she describes a future in which we have stood on the shoulders of the giants of psychology. Feminism has a place at the table, she suggests, but 50 years ago, it was a radical idea. People are evolving still. While we look much like the humans who wandered the Earth 5000 years ago, in what ways are we different in terms of cognition and morality? She is dreaming of a better future world full of better future people. How ironic, then, that she prevents herself from dreaming in order to not evolve.

There is some irony here, some tension between her two selves. One self sees the slow march of evolution and supports social change; the other sees peace blossoming on the news, knows the reason is this new form of human in front of her, and seeks to stop and reverse the change.

I think this film has it exactly correct. We are tending more and more towards peace, a global family—but there are elements of resistance out there that label ecological consciousness as eco-terrorism and concern for the public good as socialism (meaning Stalinism). War is for profit, medicine is for profit, food is for profit, racism is for profit. As long as some people profit from disharmony, harmony will be very difficult to attain. We have to do more than wait for old racists to die.

So, let’s ask the questions. What would you give up to attain peace in our time? Would you let go of your stronger feelings? Would you accept strangers as your own family? Would you cut ties with zealots, abandon political party, work for the common good? Give up faith (and doubt)?