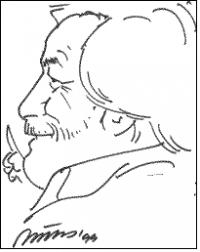 Linguists have long argued about whether language “causes” us to think in certain ways. Lera Boroditsky (University of California San Diego, formerly of Stanford) has been conducting research for several years on questions such as these. You can find articles by and about her at Edge.com, the New York Times, Scientific American, as well as numerous academic journals. A Wall Street Journal article about her work, “Lost in Translation,” (July 23, 2010), states: “New cognitive research suggests that language profoundly influences the way peoplesee the world; a different sense of blame in Japanese and Spanish.” Her work looks at far more than blame. Other themes include elements of language related to direction and time, as well as causality and memory, and the use of metaphor (See Fresh Perspective, Integral Leadership Review, June 2z014, forthcoming).

For a long time, the idea that language might shape thought was considered at best untestable and more often simply wrong. Research in my labs at Stanford University and at MIT has helped reopen this question. We have collected data around the world: from China, Greece, Chile, Indonesia, Russia, and Aboriginal Australia. What we have learned is that people who speak different languages do indeed think differently and that even flukes of grammar can profoundly affect how we see the world. Language is a uniquely human gift, central to our experience of being human. Appreciating its role in constructing our mental lives brings us one step closer to understanding the very nature of humanity.

Boroditsky’s work challenges the assumptions of folks like Noam Chomsky and Benjamin Lee Whorf. While this may be of interest to linguists and linguistic anthropologists, its relevance for behavior in organizations has not been well explored. And I have found nothing (so far) that relates these ideas to a subject like leadership.

Those who have been reading my work in recent years know that I suggest we attempt to define terms like leader, leading and leadership far too broadly or far too much limited by context. I maintain that these are generic concepts that academically have significance at a meta-level and practically in sense-making and meaning-making. In the literature on leadership these terms are often left undefined, undifferentiated. Nevertheless, Bennis and Nanus (Leaders) in the 80s had already identified over 800 definitions of that term. In 2012 Barbara Kellerman (The End of Leadership) claimed 1500 definitions in the literature. This does not mean substantively different definitions, however. In fact, Joe Rost (Leadership for the 21st Century) did an analysis of leadership definitions in the 1980s that led him to the conclusion that they were all essentially about one individual controlling others. I do believe that since then additional perspectives have been added to that, including shared leadership, deeper understanding between those in leader roles and those in follower roles.

What if we took the position that all of the definitions are true, but incomplete? I would suggest that to engage our meaning making in this way would lead us to factor in observable and non-observable, collective and individual factors. Furthermore, our definitions would then be recognized as being completely contextual. I would suggest that there are probably no universal laws of leadership below the meta level. Context makes a significant difference, not only in how we define such terms, but also how we put them into practice.

Language plays a significant role, for after all, when we speak (or think) the language of leadership there is an important relationship with the ways we think about leading, following, achieving, etc.

I am suggesting that it is not only the differences among languages that make a difference. The same is true in our choice of concepts and the variable meanings assigned to them. For example, how we think about “Who is a leader?” is going to shape how we identify those we might follow or with whom we might collaborate, what causes we will engage in and what actions we will take. If we think a leader is someone with charisma, we will look for charismatic qualities of others and be receptive to their influence. If we think a leader is someone who is a hero, then we will look for qualities and actions that relate to our notions of heroism. If we think of a leader as someone in a formal position of authority, then we will follow the exercise of that authority.

This gets even more complex when we begin to think of language as a product of relationship with other humans and our non-human context. For example, it led psychologist Clare Graves to suggest that our worldview is guided by our life conditions. Similarly, we can begin to think about sense and meaning making in regard to leadership (as an example) in terms of the dialogical dynamics in our being, not just something that we generate from within – dialogical, not just monological.

At the very least these ideas should give us pause in how we think about the language we are using and its influence on our research and practice. This is an area of inquiry – at least in relation to leadership – that is on the brink of exploration. It also reminds us of what a transdisciplinary opportunity there is in the study of leadership. Perspectives from philosophy, psychology, sociology, anthropology, linguistics, biology, neuroscience and many more fields have something to offer in this exploration. Thus, we have a responsibility to account for those contributions. The task can seem overwhelming. Yet we can engage it in at least two ways. One is to be clear about the boundaries of our work and their implications. The second is to work collaboratively in transdisciplinary teams that forge relationships across disciplines and also with members of human systems where we want to examine and learn about leadership; their roles are as participants in the research process, not just subjects of our research.

As my dear old grandmother used to say, “Watch your language!”

Read other posts by Russ Volckmann