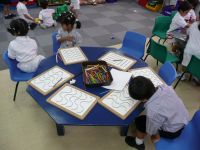 Editor’s Note: Because of the Fourth of July holiday, the Existential Roundup is appearing on Thursday instead of Friday and the New Existentialists will not be publishing on Friday. Regular publication will resume on Monday, July 7, 2014. Enjoy the holiday weekend and thank you for your understanding.

Any holiday weekend, such as the Fourth of July, often gives us just the excuse we have been looking for to play—to allow our childlike natures free reign. But why do so many of us feel that play and being grown up are mutually exclusive?

In this week’s issue of The Atlantic, James Hamblin reminds us that “Everyone Was an Artist in Kindergarten.”  At some point along the way, however, we lose that, taking up the mantel of adulthood, leaving behind childish things. But play, and art and creativity, are not childish. And it is shocking to see how soon we let that artist identity go. Hamblin tells the story of a consultant who would go into kindergarten classes and ask children, “Who’s an artist?” Not only would all the students raise their hands, but they would also raise both hands as a show of enthusiasm! The consultant would ask first graders the same question. The same one hundred percent responded affirmatively, but with a single-handed yes. By the time the children reached the sixth grade, only a few would identify as artists, and then only nervously.

In a companion article in The Atlantic, Hamblin explains that this is part of the reason why art education is absolutely vital for children. Art education is simply about teaching children about art, but rather about how to think creatively in all areas. Hamblin cites people like Damian Woetzel, former principal dancer for the New York City Ballet who now heads up the Aspen Institute Arts Program, who said:

We’re not talking about making sure that everybody has private music lessons. We’re talking about a way of educating that involves artistic sensibilities—artistic habits of mind. The ability to re-assess and to imagine. To be in a science class and not think it’s about memorization entirely. (¶ 12)

Indeed, the topic has become so important that the Labour Party in Britain is using idea of improving children’s creativity as part of their party platform for their next election. The Daily Mail reports “Children to be given a ‘human right to creativity’ under next Labour Government.” This “human right to creativity” would include some form of programs to attend drama events and museums, and generally improve Britain’s creative and cultural offerings, as well as children’s access to them.

And just in case you aren’t convinced that creativity is still not so important for children—that they can sacrifice art or music education as long as they are getting the necessary reading, writing, math, and science skills that will help them pass all their Common Core test, remember that creative skills don’t just improve performance in all those aforementioned areas. They also improve psychological coping skills! Take, for example, handling grief. We hope that this is something children will not have to experience when they are young, but some do, and they need to have coping skills at the ready. Knoxville’s Local 8 reports how kids are using creativity to cope with grief. Students who have suffered bereavements in this Tennessee city’s school district can participate in the Katerpillar Kids Camp for grades 1-12. Each child receives a square of fabric and can express their grief on that “canvas.” The squares are then quilted together and put on display at the Knoxville Museum of Art each year. What a wonderful way to take something very personal and become part of something larger and quite beautiful—a veritable work of art.

And if we learn these kinds of skills when we are young, we have such a better chance of holding on to them for a lifetime… That’s a veritable work of art!