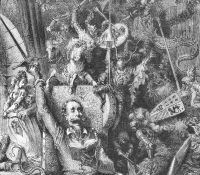 We’ve got a glaring problem in this country and world. It’s not our only problem and it isn’t the cause of all sorrows, but today, it’s one of the chief problems we face—and it is scarcely scrutinized by psychologists. The problem to which I refer is our socio-economic model for living.

In these days of school shootings, fanatical uprisings in the Middle East, and political upheaval at home, it may seem that these are all distinct events—yet, think again. In his signature work, Madness and Civilization, Michel Foucault proposed that ever since the Renaissance, the Western world has been hell bent on quantifying and commodifying life. This furor has not only anguished the minds and hearts of those who sought to advance it but also, and equally, those who sought to oppose it. For as Foucault declared, “the age of reason confined “ (p. 65), and for all its virtues, and there are many, it must be conceded that it still confines today.

Equating the age of reason with the onset of the industrial revolution and its industrialized needs, Foucault found a metaphor for all that Reason feared and attempted to segregate from “normal” life—the metaphor of “madness.” Yet, by this term he did not merely mean the poor, the dirty, and the deranged, but much that was/is sensuous, spontaneous, intimate, poignant, and ironic. In short, madness stood for all that defied mechanized thinking and mechanized labor. Foucault summarizes:

A sensibility was born which had drawn a line and laid a cornerstone, and which chose—only to banish. The concrete space of classical society reserved a neutral region, a blank page where the real life of the city was suspended; here, order no longer confronted disorder, reason no longer tried to make its own way among all that might evade or seek to deny it. Here reason reigned in the pure state, in a triumph arranged for it in advance over a frenzied unreason. Madness was thus torn from that imaginary freedom which still allowed it to flourish on the Renaissance horizon. Not so long ago, it had floundered about in broad daylight: in King Lear, in Don Quixote. But in less than a half century, it had been sequestered and, in the fortress of confinement, bound to Reason, to the rules of morality and to their monotonous nights. (p. 64)

Is it any wonder then that in our “advanced” age of reason, there are so many costs to be borne? Along with the marvels of technology, efficiency, and sanitization, have come the relinquishment of so much that enriched our primal past (and present), and that are now responsible for our “monotonous nights” (and days!). And is it any wonder that part of the price we pay for such fanaticism of the rational (mechanical) is fanatical backlashes against the vacuity it leaves in its wake? This is certainly the message of what many of the killers and fanatics evince upon investigation (see, for example, the work of Ari Krugliansky (2012) in Meaning, Mortality, and Choice: The Social Psychology of Existential Concerns, APA Press).

Our problem, as Foucault so presciently intoned, is not that we have restored comparative stability to a plague-infested bestial world—this was of course welcome in many ways; but our problem is that, in our panic to avoid the banes of the past, we threw the proverbial baby out with the bathwater, and brought about our own bestial and polarizing way of life. This way of life is crushing the spirit of its constituents and rousing the animosities of its victims (see such films as Tree of Life, Melancholia, The Great Beauty, and Her for illustrations). And it cannot be sustained.

In short, the crisis of Rationalism is undeniable and the need for depth, complexity, and awe-based reform is equally apparent. Will we step up to the challenge? Will our remedies encompass the necessary domains of childrearing, education, work, religious and spiritual settings, and governments? This is what will determine the viability of the human species.*

*See my books Rediscovery of Awe, Awakening to Awe, and particularly The Polarized Mind for an elaboration on all these points (http://www.amazon.com/Polarized-Mind-Killing-What-About-ebook/dp/B00D60Z…).

NOTE: A version of this article previous appeared in Reader Supported News and Psychology Today.