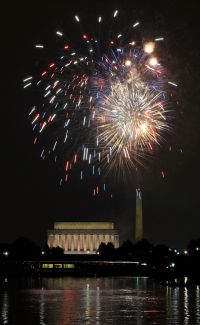 I spent this morning shampooing the carpets after the dog micturated in the hallway. He’s a good dog. He didn’t want to pee on the rug. It’s just that Americans insist on asserting their freedoms even when the law disagrees and even when others experience negative consequences of those freedoms.

The freedom in question is fireworks. Around this time every year, folks in my neighborhood start setting off their firecrackers, bangers, screamers, and all the rest of it. They’re mostly illegal here. And last year, we had a carpet ban on all types of fireworks due to extremely high fire danger. Wildfires burned all through the hills and even nibbled around the edges of town. People still lit off their incendiary devices.

Sometimes, we call the police: for example, the year a burning device skittered across our bone-dry, drought-expired lawn. The police just ignore us. They are so busy with fires, burns, and DUI’s, they don’t have time for relatively minor offenses like illegal fireworks.

So, every evening the family dog loses his little mind. The noises make him so nervous he won’t even eat a cookie. He’s too big to hide under the couch, so he just gets closer than is comfortable and lays there, waiting for it to be over. He certainly won’t go outside and pee. Thus, in the morning, he’s been holding it so long he can’t wait for his people to get up and let him out. Nature takes its course.

One rather doubts any of the people out there would change their illegal and inconsiderate behavior if they knew about my poor dog and my damp carpet. Or about the schoolteachers and children kept awake despite their early morning waiting. Or the high fire risk present most years. On Independence Day, Americans assert their freedom without much thought for the costs.

If it were just fireworks, we could just say yeah, in America, how can we expect people to celebrate their rebellion against the British by being lawful and orderly? By being considerate and sensible and safe? The whole holiday is about taking chances and stepping on a few toes.

At the park a month ago, a man brought his little girl and his pistol. Never mind that the park was clearly signposted as a firearms free zone. Maybe he was an off-duty police officer, and required to carry and forbidden to carry covertly. Or maybe he was just a guy asserting his right to carry: I have a license, I have the right, and I’m going to do this. Certainly, the kilted guy at the zoo fit the secondary category, walking through the area targeted to young children—no children of his own in evidence—with a pistol strapped to his leg.

The Texan open-carry movement has escalated things to an absurd level. They assert their right to carry by showing up in force at area restaurants, all carrying assault rifles slung over their backs.

This seems pretty ill-advised. For starters, it makes people understandably nervous: we can’t tell the good guys with guns from the bad guys with guns, and we see too many stories on the news about the bad guys. Even the NRA took a hard line against this behavior before wondering if that might cost them money and taking it all back. Second, imagining one has good intentions about stopping mass shootings, crossfire is a real and deadly risk even for the best, most highly trained markspersons. Thirdly, it’s a huge distraction.

On another tangent, a student in one of my classes recently used a vaporizing device (vape). When I asked him about it, he noted he wanted someone to challenge him so he could make an issue of it. I did just that. Campus policy is clear: no smoking in any form, no tobacco products in any form. And if he used the device in class I would be obligated to call campus safety. He asked if he could ask them about starting a petition, and I suggested he could ask them about whatever he wanted. That’s where effective self advocacy starts.

But to myself I wondered: why this issue? Why start a fight over your right to use products of dubious safety that bother people around you and possibly harm them? Of all the things going on in the world right now, why is your issue vaping?

What if we could agree that economic inequality were the issue of the day? Or climate change? Or racism? Why are we distracted with this weird issues like your right to vape, or to carry an M-16 into Applebee’s, or to set off fireworks for a month (my dog just peed on the rug again while we were talking, too scared to go outside).

Now I’m not saying we should restrict peoples’ rights to have or carry assault rifles. Quite the opposite. But maybe we should take a minute to wonder why this particular right is of such interest at this particular time. Liberal pundits like to cite racism: it’s because of a Black president. Maybe that’s a factor. But I suspect it is because we are all feeling pretty powerless right now.

Texas has been in drought for over a decade. You feel it every day when you buy beef at the grocer: most of the cattle in some parts of Texas have been sold because the ranchers can’t afford water to graze them. Our government is an oligarchy, with the vast majority of legislation benefitting the rich or super-rich, almost none favoring the common person. Society is changing (it always does, and we always panic about it). Climate change is real and imminent, and there is, most likely, nothing we can do about it. Our votes don’t matter and scarcely count: political districts are so manipulated that only the most rabidly partisan votes matter at all. Our well paying jobs have gone away, replaced with crappy food-service jobs; the best we can hope for is some boutique product or service industry that caters to the rich people who are killing us. Our retirements have been looted, pillaged by those same rich folks, replaced with 401k accounts they can use to fund their own investment priorities.

In short, we feel powerless, impotent. We seek to assert our power in whatever way we can. If that means taking a gun to dinner, so be it.

I don’t dream of a world where guns are illegal. I dream of a world where nobody wants guns to be legal—because we are not frightened of each other. Because we all have enough and feel no special urge to defend what we have. Because the news isn’t flooding us all day every day with home invasions and robberies and bullying and cybercrime and rapists, because our politicians want to talk about other matters than rape and abortion, and we feel a sense of community and obligation towards one another.

But for now I have to clean up dog pee again.