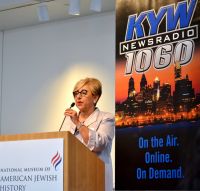 As we grow older and have less time left, there may be a tendency to ask, “What impact have I had?” “What have I contributed to others and future generations?” “What is my legacy?”

Most theorists agree that adult development is ongoing. As we age, a major task is to move beyond concerns of the self and acquire wisdom in order to contribute to others and future generations. In my dissertation research, I asked creative older adults I interviewed, “How important is it for you to leave a legacy or contribute to future generations?” (Robertson, 2005). Surprisingly, many of the participants I interviewed were not concerned with leaving a legacy—even though, in my mind, they would leave bodies of work and had already contributed to present and future generations. Some talked about what they would pass on to children and grandchildren, but most indicated that their time was “now” and they did not expect to be “remembered” for more than one or two generations.

In the book Live Your Legacy Now! Ten Simple Steps to Find Your Passion and Change the World, Barbara Greenspan Shaiman (2009) tells about the “inheritance” she received from her family, how she was inspired to create her legacy, and practical advice for people who want to make the world a better place. She explains that a legacy goes beyond the common conception of leaving a bequest, or funding a hospital wing or university building to preserve one’s memory in the future; it is sharing your “humanity” and is a gift to the present and the future.

Recently, my husband, John and I have been blessed to get to know Barbara. She has become a dear “new” friend—an experience that somehow feels “extra special” as you grow older. We were thrilled when she invited us to attend the 2014 Women’s Achievement Awards, presented by KYW Newsradio 1060, and held on June 25, 2014 at the National Museum of American Jewish History in Philadelphia, PA. Barbara and four other women from the Philadelphia area were honored for their outstanding achievements.

Barbara’s award was for the legacy she has established and how she helps others to do the same through Embrace your Legacy, which offers programs to create “cultures of caring” for a variety of audiences. Barbara’s approach to creating a legacy is that it does not have to be just for the future—it can be lived now, which is what the title of her book suggests. In addition, creating a legacy does not have to wait until one is an adult. Through Champions of Caring, a non-profit organization Barbara founded in 1995, she developed a program that has empowered more than 10,000 youths in Philadelphia and South Africa to make the world a better place by becoming engaged citizens and leaders of social change.

What makes Live Your Legacy Now so powerful is that the first part of the book tells Barbara’s story of how she became involved with building her legacy and helping others to do the same. Stories can be powerful motivators; if we examine our lives, most of us are able to discuss our heritage and identify events that have shaped who we are. Barbara’s parents—her mother, Carola Iserowshi Greenspan, and her father, Henry Greenspan, were Holocaust survivors. Barbara tells how her parents’ survival, a journey she took with her family and other Holocaust survivors to visit Auschwitz in 1989, and a brief meeting with Steven Spielberg spurred her to create her legacy.

For those who might think, “I have no idea what my legacy could be,” and “I don’t know famous, powerful people who could help me even if I did,” Barbara’s book provides a process to find out and offers very practical advice. She gives step-by-step suggestions of how one can explore their past and identify present values, skills and passions to create a vision for the future that will make the world a better place. Live Your Legacy Now is a reassuring book for those who find the idea of creating a legacy a bit intimidating or grandiose because it helps one to live “on purpose.”

The subject of living your legacy exemplifies key principles of existential-humanistic psychology. A major challenge for individuals and cultures is how to live as fully as we can, despite individual trials and unbelievable horror we may confront. Certainly, the Holocaust is an example of such a horror. Lest we forget, Holocaust museums are stark reminders of how human beings can lose their humanity. In the face of such inhumanity, people such as Barbara’s parents and Viktor Frankl survived, created legacies, and made the world a better place. Frankl was a Holocaust survivor and founder of logotherapy, which stresses the importance of finding (or creating) meaning for existence. He strongly believed in the importance of freedom coupled with responsibility.

While not everyone will have experiences as horrific as the Holocaust, most people can identify problems they would like to address and causes about which they feel passionate. The thoughts expressed in Live Your Legacy Now are very consistent with existential-humanistic psychology, and the tagline of this website: “It matters that people have a way of looking at their lives that lets them ask the big questions and determine how they want to live.” Examining who we are and what we want to contribute “is vital to the transformation of our despairing and violent world.” Creating and living a legacy is a way to break “new ground to humanize the world around us.” What is your legacy? Or, even more important, what is the legacy you choose to live right now?

Shaiman, B. (2009). Live your legacy now! Ten simple steps to find your passion and change the world. Bloomington, IN: iUniverse.