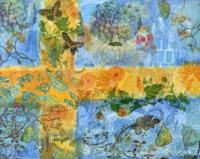 Recently I travelled to Finland for a conference which created an opportunity to travel around the Scandinavian countries. The country that left the strongest impression was Sweden.  We took the ferry from Vassa Finland to Umea Sweden and as soon as we got on the ferry, I noticed something different in the way Swedish people interact with each other.  What I saw was a strong desire to connect, interrelate, and play together.  There was a comfort in their being together that seemed foreign to me.  As we landed in Umea, a small city, named a cultural capital of Europe, this observation of the way people were being together intensified.  I noticed how people were gathered together, playing, talking, walking, eating. People were out on the streets, in parks, restaurants, enjoying their time together. They were really connected and as a visitor, I also found it easy to connect.

In Vassa Finland, a university town similar to Umea, I was surprised to see how few people were out on the streets, even though the weather was beautiful and maybe the first really nice weather of Spring.  The people we passed on the streets made no eye contact, and many people seemed to be walking or biking alone.  This discrepancy in ways of being peaked my interest and started me thinking about the differences in ways that people think about and experience their social nature, how that is embedded in cultures, and supported by social systems.

In the US, we have prided ourselves on building a nation that supports strong individuals. We constructed the government, legal system, healthcare, education, and many other systems to support individual freedom, rights, and opportunity.  And, we have been successful in demonstrating how some people can reach their potential within this land of opportunity.  Yet, we also now see that down side of the social system we have created.  We have a growing gap between the rich and poor, well-educated and barely literate, people well connected and others isolated.  While the opportunity still exists for many, I wonder how many more people could have access to that opportunity if we had a stronger social fabric.

I don’t remember using the term social fabric, until landing in Sweden and associating what I saw there as a very strong social fabric.  What I also noticed and heard about were social systems that well supported that social fabric.  One example was how many men we saw pushing baby prams.  Sweden was the first county to establish parental leave in 2002 and provides families with 480 days of paid leave, which can be taken by the mother or father, but ideally both, as they share in the care of their children.  Sweden has this policy and others tied to their efforts toward creating gender equality in the society. Both gender equality and family focus support a strong social fabric that will lead to greater opportunity for future generations.

Sweden is a country grounded in a social democracy and while the political system is moving more to the center-right, the social systems are grounded in an ideology that greater equality is ideal.  Even in Stockholm, I didn’t observe the poverty and homeless we see in large US cities.  And Sweden enjoys a relatively safe environment in terms of violent crime, with one of the lowest homicide rates.  A few people I spoke with noted the absence of guns and weapons as well as the absence of competition as factors in creating a safe environment.

Thinking about Maslow’s pyramid, it is easy to see how meeting basic needs, providing personal safety and security, and a strong social fabric can create greater opportunity for people to reach their potential.  No country is perfect, and Sweden is no exception.  It has its problems and is currently working on how to integrate a more diverse population as immigrants continue to move into Sweden.  What I think is important is how we look to other nations, cultures, ways of governing, as an opportunity to reflect on our own social systems.  My travel to Sweden peaked my interest in better understanding what social systems are needed to create and sustain a strong social fabric and the difference that social fabric can make in creating opportunity for future generations.  I hope to find a way to go back soon and do some research in this regard.

Read other posts by Nancy Southern