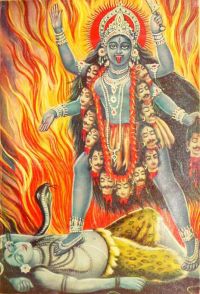 An image of the goddess Kali.

Existential-transpersonal interpretations of the midlife transition that have emerged in the literature in archetypal psychology (Achterberg, 1996; Andrews, 1993; Borysenko, 1996; Greer, 1991; Houston, 1996; Rogers, 1995) depict a non-medicalized view of a woman’s struggle through menopause; the harnessing of intentionality using personal myth; the psychological shift from an external to internal locus of control; the psychospiritual transformation resulting from a confrontation with the unconscious and the existential fear of death; and the emergence of an empowered, self-actualized sense of love, wisdom, and connectedness.

In Emerging Woman: A Decade of Midlife Transitions, Rogers (1995) describes a spiritual crisis and its resolution through an autobiographical account of her shamanic vision quest, through which she finds the catalyst for transformation by confronting the Kali aspects of her personality. In A Woman’s Book of Life: The Biology, Psychology, and Spirituality of the Feminine Life Cycle, Borysenko (1996) invokes the Guardian archetype through which she develops fierceness, and learns to value relationality and interdependence. In a chapter entitled “Alchemy and the Imagery of Menopause,” in Horrigan’s Red Moon Passage: The Power and Wisdom of Menopause, Achterberg (1996) describes menopause as both a rite of passage and a dark night of the soul. She develops inner consciousness, presence, connectivity, and an embodied sense of self by invoking the archetypes of Wise Woman, Changing Women, and Grandmother Spider. She believes that a woman finds her hero’s journey through nurturing and tending relationships, gathering strength and wisdom, peering through one’s layers of veils, falling into the abyss, and surrendering to life’s process.

Turning to a male point of view in A Psychology of Spiritual Healing, Taylor (1997) depicts an archetypal depth psychology of the feminine as a “dynamic” psychology of immediate spiritual experience that is self-healing and transformative (pp. 2-3). To develop this side of personality, analytical and abstract thinking must give way to intuitive insight and the domain of the imaginal. Through an opening of the internal spiritual sense (Swedenborg, 1996), Taylor professes that the unconscious, anima, or feminine side of personality is accessible through the depth of one’s emotions and the mythopoietic or imaginal capacity of the unconscious through which we gain access to numinous or visionary states of higher consciousness (pp. 78-88). Since psychopathology and transcendence present themselves through the same self channels, symbols of one’s personal destiny serve as a bridge between the spectrum of states that feed into the normal waking state. While state-dependent learning can facilitate an integration and transcendence of the shadow aspects of the personal unconscious, the psychic, gender opposites of the anima and animus within the collective unconscious appear in moments of expanded awareness, through insight without the loss of individual identity. This is the spiritual meaning of gender (Taylor, 2004).

Based on my personal and professional experience, my own process of individuation, and counseling women and collecting hormonal data throughout perimenopause (35-50 years) (Gordon, 2001, 2007, 2013, in press), I found common intrapsychic subliminal states associated with adrenal insufficiency and the natural dysregulation of sex steroids. These heightened states of arousal are a vehicle for self-realization. They take the form of a spiritual crisis of meaning and identity wherein deep emotions expand and contract through which the inner meaning of the stream of consciousness can be understood as a breakthrough into one’s true nature and a vehicle for its own transcendence.

Gordon, S. (2007). Psycho-Neuro-Intracrinology: The embodiment of myth, intentionality, and the spiritual sense of well-being in women at midlife. Dissertation Abstracts International, B 68/09. (UMI No. 3285857)

Taylor, E. I. (2004, October). The spiritual meaning of gender. Sermon presented to the Cambridge Society of the New Jerusalem, Swedenborg Chapel, Cambridge, MA.