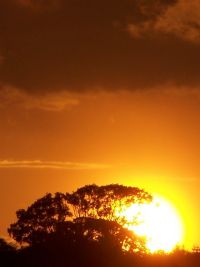 While we may be going through the height of the summer season, we also have to recognize that summer, with its bright sunshine and colors, also brings with it its darkness—its heavy downpours and dangerous lightning. Therefore, this week’s blog features a sampling of some of the darkness that has turned up this summer.

According to The Atlantic, some people literally find the summer dark and depressing. The article suggests that about five percent of Americans (according to a link to a 2002 article in The New York Times) have this reverse version of Seasonal Affective Disorder, where they feel wonderful in the winter and gloomy in the summer. The summer version of SAD is marked by insomnia, poor appetite, and weight loss, while its better known winter cousin displays the opposite symptoms. Research has also shown that summer SAD is more common in southern (warmer) climates than in the northern climates.

Maybe the darkness, though, is in one’s sense of humor. Olga Khazan writes in The Atlantic about “The Dark Side of Being a Good Comedian.” The article begins with a look at the humor following the tragedies of 9/11, and then goes back to various philosophical theories about what creates humor. Is it making fun of others, as Plato and Hobbes seemed to believe, Khazan asks, or is it closer to what Kant and other psychologists thought, where humor involved a cognitive shift from the serious to the playful? Recent research indicates that humor is more about what is wrong and what is sad than what is right. And out of that pain, with just the right amount of time elapsed, can come the humor. However, maybe there are other secret ingredients in the mix, Khazan suggests, with intelligence and evolutionary needs among them.

Summer is usually the worst time for looking for jobs. With so many people in charge of hiring on vacation, the difficult job of finding a new job becomes even harder. This makes the depressing news in the article on the Association for Psychological Science’s website on why many workers are choosing to stay in jobs they don’t like even more depressing. The article reports on research at the University of Wisconsin-Madison that found that in the current economy, jobseekers have become increasingly risk-averse. The study showed that those who self-identified as middle class or above seemed to be content where they were. However, those who self-identified as working class or below, or as discontented in their current work situation, still said they were less likely to change jobs despite their negative feelings about their work situation.

However, if you tell someone in a position of power about your difficult work situation, and he or she responds by saying, “I feel your pain,” watch out. Those words of warning come from an article in The New York Times entitled “Powerful and Coldhearted,” describing how many people in positions of power, or, according to the article, are induced temporarily to feel powerful for the purposes of neuroscience research, display less real empathy. The researchers describe how when participants were induced to feel power, their brains did not resonate with the experiences of others, although those same participants felt quite a bit when they were induced to feel powerlessness. The researchers suggest that all is not as dark as it may seem, however. They say that while those in power may not display empathy, it does not mean they are incapable of it—it simply means they may not be properly motivated to display it, which is very different.

Finally, a sad note from the world of social and moral psychology. The Atlantic has an article asking whether one of the most famous dilemmas in moral philosophy and psychology—known as the trolley dilemma—is no longer relevant or useful. The problem, which poses a question about a trolley car careening down the tracks out of control about to kill five workers. You can move the trolley onto a side track with only one worker, killing only that one. Which do you choose? In the second variation, you have the same situation, only the alternative to killing the five workers appears in the form of a fat man on a bridge over the track. If you push that fat man to his death, he will stop the trolley and save the workers, again, killing one to save five. Which do you choose?

The problem, according to the article, is that now when students learn of the second variation, inevitably the sounds of giggles rise from the class. And researchers say that humor or positivity can alter the mechanisms by which humans make moral decisions, interfering with the purpose of the experiment. Others say that the situation, based on the idea of sacrificing one person to save others, is simply not realistic in modern society. And still others simply laugh at the idea of a trolley—in itself an outdated form of conveyance in most cities. However, the article allows us to also ask an equally important question—just because something may be, in some ways, a little out of step with modern times, can we not still learn something valuable from it? And from out of the darkness, a light emerges….