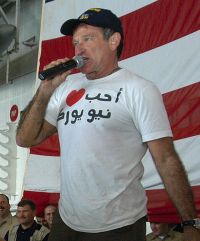 Once again this summer, death is in the air, as we mourn the losses of two great icons, Lauren Bacall and Robin Williams. Their deaths, back-to-back in the space of less than 36 hours, provide us with space to reflect on what their losses might mean, especially in terms of the differences in their respective demises. A friend and colleague posed a rhetorical question on Facebook as to the meaning of “premature” when referring to death. What does it mean when we say a person’s death is “premature”? According to whom? Our standards? Those of a higher power? And how do we contrast this to “natural causes” or “a good long life”? It is these arbitrary categories we might want to call into question as we peruse some of the latest thoughts in the media.

Ironically, I recently wrote in the space about an article discussing the psyche of comedians. Little did I know that Robin Williams would die by suicide just a few weeks later and that topic would become of major interest to writers and bloggers. But of all the articles and posts that have appeared in the last few days, the most striking one was published by the Daily Kos. In the opening lines of “After the Laughter, The Waves of Dread,” Eric Folkerth uses a quote from Charlie Chaplin: “To truly laugh, you must be able to take your pain and play with it.” If he had ended the post there, that would have been enough. That line in itself says it all. However, Folkerth continues:

Comedy and tragedy always exist as two sides of a coin. We laugh because we know how to cry; and vice versa. Great comedians, as Chaplin and Williams knew, take out their pain and play with it for a while. They turn it into something beautiful that often helps save the rest of us from our despair.

I’ve often said that comedians uncover the injustice and basic unfairness of life in ways quite similar to the great Biblical prophets. Both comedians and prophets are usually outsiders. Both speak truth to power. Both often give human beings hope. But, because they delve the pain of our world, they often take a lot of it in too. And the pain of their own lives is often what gives them such a keen compassion (a word that literally means, “to suffer with”) for the world’s pain. (¶4-5)

Just a week and a half before Williams’ suicide, The New York Times published an article detailing recent research that not only are suicide rates high among people over the age of 65 in the United States—14.9 for everyone 100,000, as compared to 12.4 for 100,000 for people of all ages—but the reasons are far more complicated than just saying “Oh, he or she was depressed.” This new report looked at people in the 60s and older who had considered suicide but then decided against it. These people said that what drove them to consider suicide as an option included illness, financial concerns, pain, issues in social support, bereavement, and a whole host of other problems and difficulties—even difficult landlords. What is most important is that this study gives more evidential strength and support to what we existentialists already know—suicide and suicidal thoughts come with no easy answers or solutions.

We also have to remember that it’s not just about the older population, but the younger population as well. Psych Central reports that 80 percent of college students who have considered suicide have not received help from university counselling centers even though suicide is the second leading cause of death among college students. Psych Central says that faculty and staff are trained to spot signals but students do not confide in faculty and staff—often they confide in their peers, who are not trained. According to the article, university suicide prevention resources are in desperate need of an overhaul to get the services to the people who need them when they need them.

If we call the people who die by suicide, or die young from cancer or some other wretched disease those who have died “prematurely,” what do we call those who have prepared to die, even if it is at an age younger than the might have hope for? There might not be a name for them but Andrew George presents some profound images and words in the Philosophers’ Mail to tell some of their remarkable stories. George is a photographer who went into a hospice in California to tell the stories of people who were dying—what they remember, what they appreciate, and what they hope they will be remembered for. Among the wisdom in the article:

The dying are the great appreciators of this world: they notice the sunshine on the roller blind, the laughter of a grandchild, another breath… And they know what spoilt ingrates we all are, not stopping to register the wonder of every passing minute. They were once like us of course. They know they wasted decades and from their beds, they strive to tell us of their folly and warn us of our own. (¶ 7)

After this, all I can say is, in the spirit of Robin Williams and Charlie Chaplin, “take your pain and play with it.”