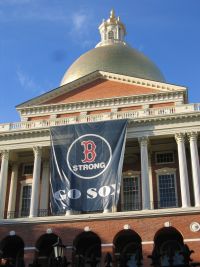 The 2014 Boston Marathon took place, like last year’s, on Patriot’s Day on a glorious spring day here in transcendentalist New England. It was a moment of triumph for so many people around our city and world, one that was preceded and accompanied by great anticipation, jubilation, sadness, and an outpouring of municipal and patriotic zeal. The winner of the men’s division race was an Eritrean émigré, the first American to do so in more than three decades. The entire event was typified by a spirit a determination, resilience and resolve. One year later, Bostonians were rightly triumphant, joyous and proud.

Several days after the horror of Marathon 2013, I noticed that a banner suddenly appeared suspended from one of the overpasses along Route 93, the north-south expressway that half the population of metropolitan Boston seems to be traveling along at any moment in New England time. In large capital letters, it read: “NO MORE HURTING PEOPLE. PEACE.” These were the fateful words written by eight-year-old Martin Richard, who had made the sign under the graceful counsel of his teacher, Rachel Moo of the Neighborhood House Charter School in Dorchester where both student and teacher resided. Moo had taken the snapshot of the boy holding a sign that would become a rallying cry in the aftermath of tragedy. On the day of the race, Martin Richard’s family had been scrambling for safety after the first explosion when the second bomb detonated several feet to their rear. Richard’s seven-year-old sister would lose half of her leg; his mother would go blind in one eye; his father suffered shrapnel wounds and would lose partial hearing. Martin Richard himself was one of three people who died in the blast. It was, as the press accurately reported, a “gargantuan crime.”

Dzhokhar Tsarnaev, the younger of the two brothers suspected of perpetrating the bombings, was found several days later hiding in a boat in a backyard in Watertown, a suburban town just northwest of Boston. It is he that the surveillance videos disclose placing the device near the finish line that would take Martin Richard’s life. On the inside wall of the boat, Tsarnaev had scrawled these indignant, haunting words: “The U.S. government is killing our innocent civilians. Stop killing our innocent people and we will stop.” He, too, is certainly not wrong. We are doing it in Afghanistan and Pakistan and Yemen as well. And aiding and abetting it elsewhere with shipments of arms and sundry material and political supports. The Rabaa Massacre one year ago in Cairo and recent atrocities in Gaza. So many surreptitious and sinister activities in the purported interests of humanitarianism, security, and peace.

Tsarnaev has reportedly indicated that he and his brother had been influenced in their beliefs and ultimate ungodly act by lectures of Anwar al-Awlaki, an American citizen and Yemeni imam whose own message—once patently non-violent and pro-American, albeit critical of its policies with respect to the Muslim world and the Middle East—had become increasingly radicalized as our government’s policies continued unabated and he himself became a hunted man. Eventually al-Awlaki was singled out for “targeted killing” and taken out by a drone attack on September 30, 2011. Such a targeted killing of an American citizen without charge, trial, or conviction was unprecedented. Two weeks later, Abdulrahman al-Awlaki, Anwar’s 16-year-old-son, was killed by yet another drone strike in Yemen. A U.S. citizen born in Denver, Abdulrahman had no interests in radical movements of any sort. “He was a typical teenager,” recalls his grandfather Nasser al-Awlaki, a former Fulbright scholar. “He watched ‘The Simpsons,’ listened to Snoop Dogg, read ‘Harry Potter’ and had a Facebook page with many friends. He had a mop of curly hair, glasses like me and a wide, goofy smile.” An intelligent, gentle, and circumspect soul, the elder al-Awlaki implores: “My grandson was killed by his own government. Shouldn’t it have at least to explain why?”

“Stop killing our people and we will stop.” “No more hurting people. Peace.” To be sure, Martin Richard’s exhortation is the more rarified moral code, but Tsarnaev’s chilling rejoinder, if we are honest with ourselves, has also its place.

And this, in the words of William James, is “the worm at the core”—something which it is difficult to discern precisely insofar as the locus of machinations resides within our own nation and selves. Going forward, we can best aspire to the democratic principles and ideals that underwrote those first shots of the American Revolution at Battle Green in Lexington and the Old North Bridge in Concord to the extent that we honor the multiplicity of contending voices. Those banished, unwanted voices comprise an essential part of the dialogue and narrative We must embrace, as Rollo May kept admonishing, the daemons within if we are to forestall future returns of the Furies. The Obama administration has garnered voluble and near-unanimous support from the third force from the very start. Important, then, that we, especially, attend to the stirrings, voices and alternate aspects and selves on those Jamesean “margins” of consciousness. Only in this way will life yield the “richness” and eventual good works to which exemplars like James and May tirelessly pointed. If Martin Richard’s message of peace is to be had, this is the way to do it.

“God,” said C.G. Jung several days before he died, “is the name by which I designate all things which cross my willful path violently and recklessly, all things which upset my subjective views, plans and intentions, and change the course of my life for better or for worse.” And then there is the poet Kafka who muses quietly in his diary, “Only in the chorus do we find a certain truth.”

NOTE: A version of this article previous appeared in the Society for Humanistic Psychology (Division 32 of the APA) Newsletter..