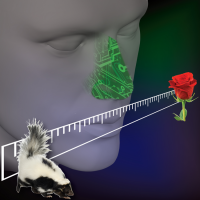 If you have been paying attention to the smaller details of health news—the non-Ebola-related news—you might have come across this most remarkable discovery: that the nose seems to know death. You may be stunned or confused by this statement but here is the evidence. The New York Times reported (in a blog no less) that a “Failing Sense of Smell May Predict Sooner Death.”  In these five short paragraphs, the article describes a study appearing online in PLOS One in which researchers tested more than 3,000 men and women on their ability to identify five different scents—rose, leather, orange, fish, and peppermint. Controlling for various health and socioeconomic factors, the researchers still found that those who could not detect the odors were three times as likely to die within five years as those who could. They described the loss of the sense of smell as not being problematic in itself but rather as a factor of age-related degeneration.

The Atlantic was a little more dramatic about this news, with a headline announcing: “I Couldn’t Smell, and Then I Died.”  The Atlantic described the work of the researchers, Jayant Pinto, Martha McClintock, and their colleagues, who used what they benignly and alliteratively called “Sniffin’ Sticks” to see how close to death the participants were. Those who were likely to die within five years were the ones who could not detect any of the odors. However, what the researchers thought was worse—worse than death?—was that they do not know the reason why this is so.

One possible theory, according to the article, comes from the fact that the olfactory nerve is the only cranial nerve directly exposed to the environment, and thus to viruses, pollutants, and other contaminants. There are also stem cells in the olfactory nerve, so if the stem cells there stop regenerating, say hello to full degeneration. We may not know the exact mechanisms for how a lack of a sense of smell—anosmia—leads to death, but we have much anecdotal evidence for the often devastating effects.

Remember back to your Psych 101 days and think about what your sense of smell actually does for you. It is directly involved with taste and it is directly involved with memory. Scent is a powerful cue for us to decide whether we are attracted to someone or something. Imagine yourself smelling something good and then imagine yourself smelling something bad and feel your reactions. We attribute great meaning to these scent cues and people who have lost that describe tremendous difficulties. The Atlantic article cites the case of Bonnie Blodgett, who described her travails with anosmia in a book entitled Remembering Smell and the extreme depression that ensued. The Atlantic also talks about Elizabeth Zierah, who wrote an article for Slate in 2008 about losing her sense of smell after a stroke at age 30. She said:

Without hesitation…I can say that losing my sense of smell has been more traumatic than adapting to the disabling effects of the stroke. As the scentless and flavorless days passed, I felt trapped inside my own head, a kind of bodily claustrophobia, disassociated. It was as though I were watching a movie of my own life.(¶ 12)

And finally, The Atlantic reminds us of Michael Hutchence, the leader singer of the band INXS, who lost his sense of smell in an accident in 1992, developed depression shortly after, and then committed suicide five years later by asphyxiation.

Less well known, but just as powerful, was a tale that appeared in The New York Times earlier this year in which the food writer Marlena Spieler told her story about losing her sense of taste and smell in a fluke accident where she was hit by a car as she was walking down a street in San Francisco. Describing her life since her teenage years as one oriented around the love of food, she said she could not believe how in the morning and days following the accident her experiences of food would change:

My morning coffee was tasteless. Visitors brought delicacies to soothe me, but with each bite, I tasted dread. These well-chosen treats had no flavor, at least none that I recognized. Cinnamon drops, a childhood favorite, were bitter, horrible. Tamales were as bland as porridge. Bananas tasted like parsnips and smelled like nail polish remover.

It got no better as days went by. Gently sautéed mushrooms seemed like scorched bits of sponge. Red wine was just flat and sweet or unremittingly bitter. (¶¶ 8-9)

In her case, the nerves for olfaction and gustation had been injured but not severed, so she could eventually regain her senses. But in the meantime, she describes also having forgotten formerly known tastes—like ice cream—that she tasted as though it was the first time. She literally—from a taste point of view—did not remember tasting it before, although the story describes some of her favorite ice cream flavors she had bought moments before the accident.

Spieler also experienced phantosmia—phantom scents—and parosmia—distortions of real scents—in the time since her accident. But she was determined to regain her senses and set about a course of sense rehabilitation—what she called a “taste rehabilitation plan.”

After spitting out my first post-accident chocolate, I sampled as many types as I could. At first I could tolerate only the most insipid milk chocolate, but gradually I upped the cocoa level. Eventually I loved dark chocolate again. (¶ 14)

She says that her senses of smell and tastes are not what they were but she has new likes and dislikes now, although on occasion her senses betray her and what tasted good one week tastes badly the next. She also says fragrances like flowers or even those of people are elusive for her. However, we can all learn from what she has gone through to truly savor each sensual experience in the moment we have it.