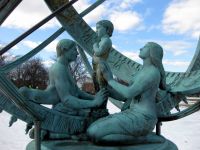 Browsing social media yet again when I should have been working, I came upon a story that broke my heart. The headline, written by a Fox News affiliate in Denver was, of course, designed to tear at the soul: “Woman, 29, chooses to die two days after husband’s birthday.” However, this is truly a heart-rending story, with some very personal reverberations.

The narrative goes as follows: shortly after getting married in 2013, a young woman started experiencing tremendous head pain. Soon, she received a diagnosis of an astrocytoma, a brain tumor that gave her a prognosis of about 10 years. But if that wasn’t bad enough, the tumor progressed to a glioblastoma multiforme, considered the worst kind of brain tumor, if you care to rank them. Now, her prognosis was down to maybe 14 months mostly of declining function.

Rather than deal with horrors of painful, debilitating treatments, this woman and her husband have opted to move to Oregon, a state that has a “Death with Dignity Act.” According to the article, more than 750 people have turned to this option—using medication to die instead of the ravages of severe illness—since the law was passed in 1997. Since the announcement, a huge debate has ensued, even on the Opinion pages of The New York Times where some are arguing that two moral wrongs (a poor health care system and physician-assisted suicide) don’t make a right, while others, most of whom describe having witnessed the suffering of the dying, argue that the terminally ill should have a choice.

This woman has chosen. She has chosen her death date—November 1—which is two days after her husband’s birthday.

Her chosen date of death really struck me because it is the date of my birth. Jason Dias recently wrote about the upsides of aging while musing about his own birthday. Lately, when musing about my own impending birthday, I’ve becoming very caught up in the numbers. I have a milestone birthday, not this year, but within eyeshot, but I spend most of my time with teenagers—even many of my college students are still teenagers. I am hyperaware that many of my references are dated or that I have to work extra hard to make sure that I keep up with current slang. One group of high school seniors used a familiar bit of slang but with a different intonation with me last week and I thought I had entered a foreign country. They laughed at how little slang I knew, until we all realized it was just the way they said it. But, boy oh boy, did I leave there feeling old!!! Pity party on the Queens bus!

But now I place this in the perspective of this young woman, choosing to end her life on the day when will have the opportunity to celebrate another year of mine. I will get to celebrate another year of dated references (I could appreciate when the New York Mets’ former star Keith Hernandez noted during a recent Mets game telecast that teen star Austin Mahone was the Donny Osmond of this generation, I got the joke, along with maybe four other people). I also hope for another year of teens correcting me on my slang. Feeling old is a blessing. Being old is an even greater one.