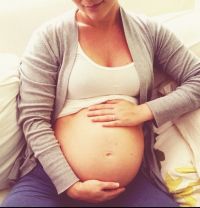 It’s 2.57am, and I find myself wide awake, yet again, for the third consecutive night. Apart from the constant trips to the bathroom throughout the night (and day, for that matter), I found out that these midnight awakenings are just another one of those uncontrollable “perks” one gets to enjoy during pregnancy.

Often, what we hear and see in movies tend to portray pregnancy as such an amazing, beautiful life experience. Even my well-meaning husband tried to remind me of that every time I complain about my aches and pains. But my firsthand experience taught me that while the experience of growing another human being inside you for 40 weeks is an amazing gift, no doubt, pregnancy is to me really best described as one of the ultimate experiences of existential anxiety!

Over the last seven months, I have come to hear of countless stories about sudden death of babies in the womb, how babies stop breathing for unexplainable reasons, or how the placenta sometimes gets detached before baby is due, and many more—all enough to send my anxiety alarm bells off. Before long, I find myself constantly worrying about whether my baby is growing enough, moving enough, getting enough nutrients, and everything else imaginable in the wandering mind of a mommy-to-be. I was second-guessing everything, “Am I eating right? Sleeping right? Exercising right? Gaining right amount of weight?” Basically, am I doing, thinking, feeling right? for my baby.

The total sense of responsibility towards the life and well-being of another human being was overwhelming, to say the least. To be utterly honest, at those times, it was really hard to appreciate the “amazingness” of this pregnancy experience as what it is made up to be, until I began to understand and appreciate the existential lesson my pregnancy was offering me—the humbling experience of surrendering.

The power of surrendering
Why humbling, you may ask. I first realized it is so when it became apparent to me how little control I have over what happens throughout my pregnancy (apart from maybe what I choose to put in and do to my ever growing body). As much as I try to educate myself on the dos and don’ts, and ploughing through whatever baby books I can get my hands on, like a responsible mommy-to-be would, I have no real control over what happens to me or my baby in that span of 9 to 10 months. To me, that is perhaps one of the most anxiety-provoking experiences (other than the death and dying of loved ones) I’ve ever encountered thus far in my life. The power of this paradoxical nature of life and death experienced through pregnancy strikes the very core of my existential anxiety. How can one possibly deal with such anxiety? The power lies in surrendering.

The word surrender is often associated with two things (1) defeat; and (2) faith. It conjures up the not-so-positive feelings of defeat as it reminds us of the sense of powerlessness, of weakness, of giving up, or of succumbing to the power or force of someone or something else. On the other hand, the notion of surrendering in faith is about trust—trusting one’s God in all things without doubt or fault in one’s faith, but with humility and dependence, and by letting go of one’s hold on how to direct one’s life.

Through my pregnancy, I came to encounter surrendering in a new way—as an honest process in my journey of acceptance of what I cannot change nor control. It reminded me of Eckhart Tolle’s description of surrendering as “the inner acceptance of what is without any reservations” (2001). We suffer because we expect something to be what we want and not what it is. And we experience disappointment, frustration, anxiety, and pain as a result. Surrendering opens us to the ability and willingness to experience something for what it is, in its process of becoming, and not what it should be.

But I could almost hear you say, just as I did myself, that surrendering is too hard. Instead of trying to overcome the suffering, which is what most of us are programmed to do, to surrender feels like such a failure, such a coward. It doesn’t seem right. Yet, the truth is, surrendering requires a lot more courage, a lot more willpower, a lot more humility, and demands much more of a person than to “fight” against one’s anxiety.

Physically, I was feeling weak, unfit, clumsy, unattractive and many more not-so-appealing features of carrying the extra weight on my body. Mentally, I was no longer as sharp as I was before, taking longer time to process my thoughts, recalling memories (and even doing simple math), which was very hard for someone who prides on being quick on her feet! Emotionally, my hormones were creating havoc, causing emotional highs and lows like a roller coaster ride, and I was becoming less tolerant, and increasingly paranoid. (My unfortunate husband and family members were the ones who had to bear the brunt of it).

Surrendering to the fact that I have no control over these changes allowed me to experience what pregnancy is, in all its beauty and “ugliness.” Surrendering to and being with my vulnerability, my anxiety, my struggles to these changes, instead of taking away my power, offered me total control over how I choose to experience and make sense of them. For one, I learned to acknowledge that my body, mind and heart is no longer wholly mine, doing what I want it to do, but instead doing what it is meant to—helping the little one inside me in her process of becoming. And in that, it allowed me to journey along in my process of becoming a mother.

What pregnancy taught me about therapy
Surrendering to my experience during pregnancy also taught me a great deal about my work with clients. In the last few months, several clients and friends have asked me if my work affects my pregnancy and vice versa. To most of them, sitting with so many intense emotions and distress during therapy doesn’t seem to be an emotionally healthy nor effective thing to do while I am pregnant.

At the beginning, this possibility never crossed my mind. Or perhaps I simply refused to acknowledge its power. I was adamant to remain the same, to be able to do the same, in and outside therapy, regardless of my condition. Truth be told, I took too much pride in wanting to overcome the so-called challenges of pregnancy other mothers-to-be experienced, and wanting to stay just the same. But the reality is I am not the same. Needless to say, that eventually backfired, as I began to feel increasingly ineffective and anxious in my therapy sessions. It was only when I began to surrender and make space for the emotional changes I was experiencing that I came to terms with how my pregnancy affects me and my therapeutic work. Gradually, it is through embracing this process of changing and of letting go that I learned to make way for something new to emerge in me.

[the] ultimate that Tillich speaks of is not a personal God…but the ultimate principle of being; that which is beyond us, is greater than us and organizes us… which can be reached only through a total openness to what is, especially that which we have difficulty in facing, the whole anxiety-provoking reality. (Van Deurzen, 2010)

The experience of giving life to a child resembles that reality for me.

Similarly, in therapy, it is so easy at times to succumb to our desire for clients to change for the better. This often leads us astray into directing clients as a way to manage our own anxieties even though it is often done with the best of intentions. And we see clients doing just the same. But this ultimately interferes with the clients’ own process of becoming, driving them further away from where they are meant to be. I learned that it is only in allowing myself to surrender to my clients’ personal experience in our sessions—their anxieties and struggles with their ultimate concerns, however difficult—that I could encounter my clients as they are, and in turn, enabled them to do the same.

So, while the last seven months have challenged me in many ways, it has also enriched me tremendously. In her process of becoming, my unborn child has taught me the courage to surrender to my existential anxiety, in order for us to experience our journey of becoming mother and daughter. I suspect this is only the beginning of the lessons of surrendering in my therapeutic work, and of parenthood…

Surrender does not transform what is, at least not directly. Surrender transforms you. When you are transformed, your whole world is transformed, because the world is only a reflection… Do not resist the pain. Allow it to be there. Surrender to the grief, despair, fear, loneliness, or whatever form the suffering takes. Witness it without labeling it mentally. Embrace it. Then see how the miracle of surrender transmutes deep suffering into deep peace… — Eckhart Tolle

Today’s guest contributor, JoAnn Loo, is a therapist from Malaysia. Inspired by the great existentialist psychologists including Yalom, Bugental, and May, she came to the U.S. two years ago to learn the workings of existential therapy through the Existential-Humanistic Institute in San Francisco, CA, and has been consciously practicing her new-found way of being ever since.