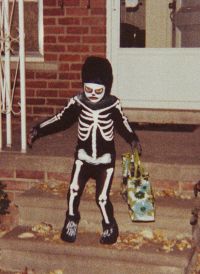 Sometimes, I want to shout at my son. I mean, I don’t want to, but I experience a powerful urge to. But he’s nine, and shouting at him wouldn’t be helpful. It would damage the relationship and teach bullying. When this urge arises, sometimes, I take a page out of Carl Whitaker’s book: I pretend to shout, mocking the angry man, aping myself and my own anger. It’s hilarious, diffuses the tension, and makes the point: I’m angry but I don’t want to be.

This is sublimation as the mature form of denial. Rather than pretend not to be angry, for example, we acknowledge that we are angry—but set limits around how that anger will affect us. We defuse or defray it, protect our loved ones from its problematic expressions, but do not give it free reign. In this way, we can look at it without experiencing the worst effects of the unacceptable.

When it comes to death salience, those worst effects include nationalism and xenophobia. Terror Management Theory (Greenberg, et al., 2004) is an approach that seeks to discover, through experiments, how our knowledge of death affects us as humans. A great many experiments have been done by now, with broadly similar results: death salience causes us to have more positive regard for people like us, and less positive regard for people unlike us.

There are many, many examples now, of various iterations of the experiments. Briefly, people take questionnaires in one of two conditions. In one condition, they just take the survey. In the other, they first are exposed to some reminder of mortality, then take the survey. The questions regard how well we like people who are like us (for U.S. citizens, typically Americans and Christians) and have a second set of questions about people unlike us (Arabs and Muslims, for example). On average, the death-salience group endorse more liking of their own in-groups, and more hate statements about the people unlike themselves.

This seems to point at death salience damaging our self-esteem, and us attempting to repair that self-esteem through affiliation. If other people think what I think, I must be a good person. This might also have much to do with religions that aggressively recruit: the strength of the congregation is a self-esteem issue.

Enter Halloween. No culture can completely suppress all knowledge of death at all times and remain healthy. Various cultures have their own practices to outlet this death anxiety in a healthy way. Here, we have Halloween. On one night of the year, we watch our favorite scary movies, dress as corpses or ghouls or slashers, and go out in the dark with our kids for a good time. (Sometimes, we make death sexy—maybe that qualifies more as denial?)

This is sublimation: death exists, we are aware of death, but death is fun. It is a thrill or an amusement, to be mocked, like Daddy’s anger. We dress up as death, laugh at it, get scared, and laugh at our own fear. We have embraced it as a nation, with adults trick-or-treating, adults having Halloween parties with other adults. It serves a purpose: defraying death anxiety without recourse to nationalism or xenophobia.

I propose an experiment: Terror Management Theory questionnaires at Halloween parties. I suspect the results would show a decrease in nationalism and xenophobia—but I’m prepared to be shocked.

Shock is, after all, an element of Halloween.