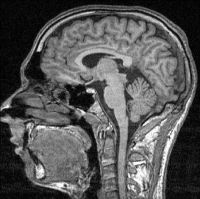 As today is Hallowe’en, a day that once marked the end of the harvest season one during which the veils between the living and the dead were quite thin and now seems inextricably tied to “spooky” tricks and candy corn, this week’s column will be looking at some of the oddities in the news of late.

Just in case we haven’t heard enough frightening brain research that presents us with “biological” proof of that certain responses are predetermined by brain structure or chemistry, enter the latest installment from the Pacific Standard, entitled “He’s Definitely a Liberal: Just Check Out His Brain Scan.” Here we learn that new research out of Virginia Tech appears to identify those with Liberal or Conservative leanings based on the results of fMRI imaging. The study involved scanning the brain while participants viewed various images that were alternately disgusting, threatening, pleasant, or neutral. Researchers reported that the response to just a single disgusting image was enough to predict the participant’s political leanings. In contrast, the participants’ subjective reports about the various images did not betray their leanings. If disgust is in the brain, does that mean there is no way to change it, and thus no hope in facilitating dialogue between those of different leanings? That’s scary.

Also scary is the barrage of media reports and analysis about the actor Renee Zellweger and the “new look” she unveiled a few weeks ago. Writing for The New York Times, Julia Baird described the hullabaloo surrounding Zellweger’s appearance as “overblown” and “sexist.” What is it about famous people that makes us feel that it is appropriate or right for us to literally pick apart their physical features, critiquing each detail, and analyzing them. Did Zellweger have plastic surgery, everyone asks? No, she says, but what about all the media outlets who asked their plastic surgeons-in-residence to analyze the changes in her facial features. Botox, they said. Happiness, love, and better living, she said. The New York Times even used Zellweger as a topic in their Room for Debate section with six different writers using the actress’ change of appearance as the impetus to question beauty in Hollywood and for women in generally, as well as notions of aging. I have to admit that when I saw the pictures, I did not recognize her as the same actor from Jerry Maguire and Bridget Jones’ Diary. However, honestly, I didn’t feel that my life was going to change that much because of it. How many actors have looked different over the years—whether by intent or by nature? Again, the intense scrutiny on this woman’s appearance is scary.

Now, prepare to shudder to meet the Prof, the hero/therapist in the latest addition to the growing world of online therapy and therapy apps. The Prof is your guide through Sleepio, an app providing a course of cognitive behavioral therapy for insomnia .The New Yorker says that research shows that it is the character of the Prof, with his bright red jacket, that keeps users coming back. Another digital platform features a character named Ellie. While both characters can only assess through multiple choice questions or data from trackers or speech patterns, that contact with the character—the cheers or even the scoldings—prove quite supportive. The author of The New Yorker article, Alex Halperin, says, The idea that people can become invested in a non-human figure like the Prof or Apple’s Siri is not radically new; sometimes, at least in Hollywood, they even fall in love” (5) Even The New York Times concurs.

Chatbots are already giving relationship advice and, according to Dennis Scimeca of The Daily Dot, offering (rather rudimentary) therapy on Twitter. And in a 2010 New York Times story, Amy Harmon reports on robots designed to interact with people, including Paro, a furry robotic harp seal meant to be therapeutic for seniors. She describes a Paro encounter:

“‘Oh, there’s my baby,’ Ms. Oldaker’s mother, Millie Lesek, exclaimed that night last winter when a staff member delivered the seal to her. ‘Here, Paro, come to me.’

Brain scan certainty, superficial judgments, and robots, oh my! Where is the humanity, the individuality, the respect for our individual personhood, the dignity? Let’s hope it is simply hiding somewhere underneath a lavish Hallowe’en costume. But we’re ready. Come out come out wherever you are.