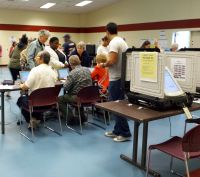 While many people were declaring that “racism” was “over” with the election of a Black president, and then disrespecting that Black president at each and every turn, nowhere did that hypocrisy reveal itself more clearly than in the pages of today’s Daily Kos in an article entitled, “South Carolina exit poll asks whether ‘blacks are getting too demanding’ over equal rights.” The article describes, and even includes a tweeted picture, of South Carolina’s exit poll from Tuesday’s election asking that exact question. The exit polls also queried if voters felt that Black people were hard working.

So what does this have to do with anything?

According to the article, David Woodard, a political science professor from Clemson University in South Carolina, said, “It was designed to take advantage of a political moment of Senator Tim Scott’s election as the first African-American from a southern state since reconstruction. It was not designed to be provocative” (5). Fun fact: Woodard is White. Even if “racism” is supposedly “over,” which we all know it’s not, this election has already established the need for remedial courses in Basic Diversity and Multiculturalism, and Learning How to Treat Each Other With Respect.

Speaking of which, a most interesting article was brought to my attention this morning by that most wonderful of writers, Dan Savage. He tells the story of a family from a reality television shows—the Duggars—of whom I had never heard and knew nothing. For those of you like me, Savage explains that the Duggars have a reality show entitled 19 Kids and Counting, and that Jim Bob and Michelle Duggar, patriarch and matriarch of this clan, are Fundamentalist Christians and members of the Quiverfull movement.

For those of you, again like me, who have never heard of the Quiverfull movement, Savage provides a definition via Amanda Marcotte from Slate:

“Quiverfull members aspire to have as many children as possible, arguing that to win the culture wars, the faithful must literally ‘out-populate the enemy,’” as Amanda Marcotte explained on Slate. “It’s also a ‘patriarchal cult’ that teaches that men are ‘leaders, teachers, initiators, protectors, and providers’ and women are helpmeets who serve men by being ‘submissive and yielding.’ Submission is also demanded of children, particularly daughters.” (¶ 4)

Savage explains that this current story began last April when one of the Duggar girls became engaged, and People Magazine featured a cover story about the engagement and the Duggar family “Rules for Courtship,” including no holding hands, the first kiss after vows are exchanged and sex on the wedding night, and then every time the husband demands it. Savage, known for his provocative views on sexuality, said he made a “snarky” comment on his Twitter feed, only to be attacked by a barrage of Quiverfull faithful, who tied up his account for a week.

However, Savage said the story resurfaced when the Duggars appeared back on the cover of Us Magazine a few weeks ago with more of their rules for love and sex. More troubling, though, according to Savage, is that this show is so highly rated and people love to hear the stories because of the color of their skin and their religion. Savage writes:

Not only do Quiverfullers want to impose theocracy on the United States, they think of their children as weapons toward that end. Like I said: pretty scary.

Quick thought experiment: If 19 Kids and Counting were about a Muslim family who were as politically radical as the Duggars—if their daughters appeared on the cover of People and Us in hijabs, if they were part of a movement that viewed children as weapons (even metaphorically), if one of the Duggar kids worked for CAIR—the right-wingers at Twitchy and Fox News and the Family Research Council would be attacking the Duggars, not defending them from harmless snark or offering them cushy jobs.

But the right wing doesn’t have a problem with the Duggars: They’re the right color, they worship the right God, and they want to impose the right brand of theocracy. (¶¶ 31-33)

Since this article came out, so have the flame wars on social media. The friend who sent the article to me thanked the person who sent it to her and noted that she would share it with her teenage daughters. This prompted one woman to feel entitled to call her a bad mother for sharing it, thinking it would encourage these intelligent, rational, thoughtful girls into having wanton crazy orgiastic sex by the very act of reading about it. Others claimed the article provoked hatred against Christians, or women, or those who made the choice to remain virgins until marriage.

What happened to respect, dignity, and civilized dialogue? At what point did that get voted out of office? Out of the democratic process? Because it seems like it has been missing from politics for some time. And it is missing from all discussions relating to things political. Perhaps, we need to refocus on individual human relationship—the connection between me and you, not us and them. Two people at a time. Maybe then we can really change the world.